Iron And Wine: Springlike And Springy

Iron And Wine: Springlike And Springy 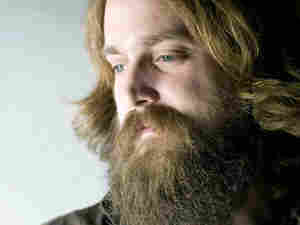 In "Belated Promise Ring," Iron and Wine basks in the sweet spot between darkness and delicacy. Emily Wilson hide caption

On his 2001 debut, The Creek Drank the Cradle, Iron & Wine's Sam Beam emerged as a premier chronicler of bare-bones Southern Gothic folk misery, melding bleakness and timeless beauty with nothing more than his soft voice and his acoustic guitar. But ever since, he's experienced an unlikely evolution: As his music has gotten ever more fleshed-out and musically advanced, he's lost none of his warmth or ability to tell dark, nuanced stories.

Beam has just followed 2007's superb The Shepherd's Dog with Around the Well, a surprisingly cohesive two-disc collection of odds and ends, pairing a disc of early acoustic home recordings and covers with a set of more polished rarities. It's telling that the second disc yields even more rewards, most notably in the form of four songs the band made for the Dennis Quaid movie In Good Company: Devotees know Iron & Wine's incredible 10-minute track "The Trapeze Swinger" from that soundtrack (included on Around the Well), but they won't know the other three.

Best of those is "Belated Promise Ring," which finds Iron and Wine easing nicely into the springy, springlike sound that defines The Shepherd's Dog. A subtly shaded and mysterious look at a complicated relationship, "Belated Promise Ring" finds Beam pining for the enigmatic Rebecca — "I once gave to my Rebecca a belated promise ring / and she sold it to the waitress on a train" — while ruminating on her motives: "They say time may give you more time than your poor bones could ever take / My Rebecca said she never wants a boy / To be barefoot on the driveway as they wave and ride away / and to run inside and curse the open door." "Belated Promise Ring" finds Beam basking in the sweet spot between darkness and delicacy, turning the melancholy near-misses of a star-crossed couple into four almost impossibly dreamy and graceful minutes of pop music.