Accessibility links
Bach With A Twist Of Afro-Cuban Jazz The new CD Bach in Havana, from the Miami-based Cuban group Tiempo Libre, blends Bach melodies, from pieces such as the Mass in B minor and the Well-Tempered Clavier, with infectious Cuban rhythms including the cha-cha-cha, the son and the danzon. 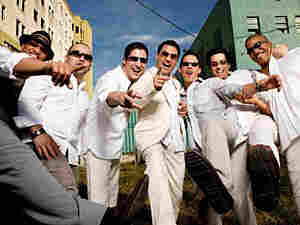 Johann Sebastian Bach's music has been played on everything from banjos to marimbas. There's something so elemental and sturdy about his melodies — whether solo or intertwined with rigorous counterpoint — that makes the music hard to mess up, even when played on a singing saw.

The members of the Miami-based Cuban group Tiempo Libre don't play Bach with singing saws, but they do employ bongos, congas, saxophones and gourds — instruments of Afro-Cuban jazz. Their new CD, Bach in Havana, blends Bach melodies from pieces such as the Mass in B minor and the Well-Tempered Clavier with infectious Cuban rhythms including the cha-cha-cha, the son and the danzon.

It would be easy to write off Bach in Havana as just another cross-cultural, crossover gimmick, but the musicians of Tiempo Libre come by their blend honestly. In Cuba, they studied classical music at a venerable Havana music conservatory by day and played Latin jazz rumbas under the cover of night, as the Afro-Cuban style was forbidden at the school.

For Jorge Gomez, 37, the group's leader and arranger, the melding of Bach and Cuban music comes easily.

"If you study the music of Bach for 15 years and at the same time, every night you go to play rumba, guaguanco and cha-cha-cha, it's easy to put both worlds together."

The classical connection gets even more personal for Gomez. His father, one of Cuba's most respected classical pianists, played Bach at home. Gomez says that after nights of playing Afro-Cuban jazz, he'd return home and fall asleep to the sound of his father making his way through the various preludes and fugues of Bach's Well-Tempered Clavier.

The members of Tiempo Libre eventually left Cuba, hoping to find success in the U.S. So far so good. Their second and third Afro-Cuban CDs were nominated for Grammys, they've secured a big label contract, and last year they cut a CD with classical superstar flutist James Galway. Tickets for their concerts, at both jazz and classical venues, routinely sell well.

At any given show, Gomez says, they mix it up between traditional Afro-Cuban jazz and their innovative twist on Bach.

"The classical music with the Afro-Cuban rhythm is our life," Gomez says. "It's not like a show, it's like a Cuban party, but now with Bach. He's with us all the time."