Accessibility links
'Alan's War': A Graphic Novel Revisits WWII After a chance meeting on a beach in France, a young illustrator and a World War II veteran collaborated to create Alan's War, a graphic novel that recounts an American GI's experiences in Europe. 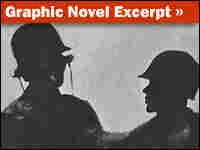 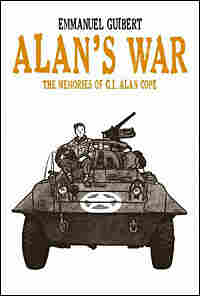 In 1994, a 30-year-old cartoonist named Emmanuel Guibert was visiting a small island off the coast of France when he happened to asked 69-year-old World War II veteran Alan Cope for directions.

That request turned into a 15-minute conversation, which evolved into a deep friendship and, eventually, led to the creation of the graphic novel Alan's War.

"The first time he started to tell me things about his life and his war was on the beach on this little island on which he used to live," remembers Guibert. "That's when I realized that he was a fantastic storyteller."

A budding illustrator at the time, Guibert was struck by Cope's amazing memory and his narrative ability. The older man told his stories as if he were living in the moment, not as someone looking back 60 years later. Guibert proposed that they work on a book together.

Alan's War, the result of their collaboration, recounts Cope's experiences as an American G.I. during World War II.

Guibert says that Cope wasn't a hero — he arrived in Europe too late to see battle — but his stories are still powerful. He first set foot on European soil in the bombed out city of Le Havre, northern France. One day, while trudging along amidst the ruined city with their heavy packs, Cope suddenly remembered that it was his birthday.

"He's in the middle of this world in ruins and he's 20 years old, and he forgot his own birthday," says Guibert. "It was very moving to me to listen to his story because it made me realize something that we all know, which is that war is always made by kids."

As part of General Patton's 3rd Army, Cope's unit of about 70 men thrust deep into the heart of Eastern Europe in order to keep the Soviets from gaining too much territory. But other Allied troops never followed, and the unit was ordered to pull out of Prague. On the way out, they were told to wear white as protection from advancing Soviet forces and retreating Germans.

Guibert says Cope's unit passed a column of German troops. One German soldier was so amazed to see the Americans all dressed in white as if they were surrendering that he stopped moving and was crushed by a tank that was rolling behind him.

"That's the first time, I think, that [Cope] saw someone dying in front of him, and [he] never forgot it," says Guibert. "I remember the emotion he had 60 years afterward."

Part of what makes the graphic novel so engrossing are Cope's small but extraordinary stories of everyday life as a GI: "He wanted to tell things as simply as possible, never adding anything, just the things that happened," says Guibert. "That left a fabulous amount of space for the images. He made me want to jump on my drawing table and start drawing."

Guibert says Cope gave him the freedom to draw things as he imagined them. And sometimes the two were stunned by how closely the drawings resembled Cope's actual memory.

After their initial meeting on the beach, Guibert's friendship with Cole lasted five years, until the older man's death at the age of 74.

Guibert says there's not a day when he doesn't think of his friend. Before Cope died, Guibert proposed they visit the U.S. together, but he says Cope didn't want to go back. Aside from one short visit after the war, he never returned to his country again — the war had altered his life forever. But with the U.S. edition of their book, Guibert says, he feels the two of them are taking that trip to America after all. 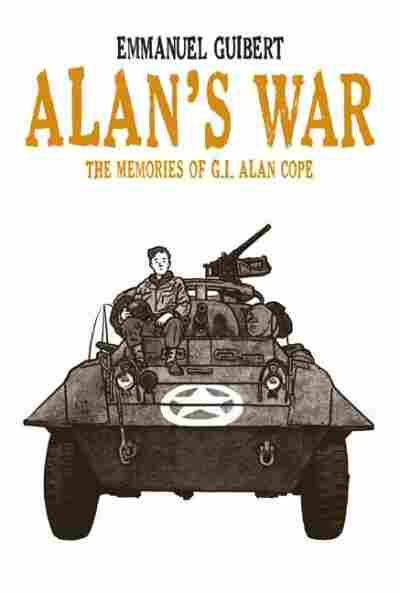