Accessibility links
Buckwheat Zydeco Lays His 'Burden Down' For 30 years, the go-to guy for zydeco music has been Stanley Dural Jr., better known as Buckwheat Zydeco. In addition to featuring his own songs, his new album Lay Your Burden Down features songs by an eclectic group, from Bruce Springsteen to Jimmy Cliff to Captain Beefheart.

When the Levee Breaks

Lay Your Burden Down 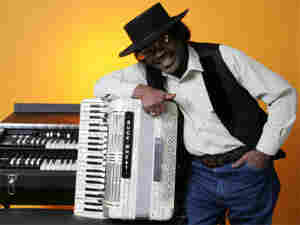 Though most people refer to him as Buckwheat Zydeco, Stanley Dural Jr. says it's technically the name of his band. Courtesy of the artist hide caption

For 30 years, the go-to guy for zydeco music has been Stanley Dural Jr., better known as Buckwheat Zydeco. Dural is considered a master of the accordion and organ, and in addition to featuring his own songs, his new album Lay Your Burden Down features songs by an eclectic group, from Bruce Springsteen to Jimmy Cliff to Captain Beefheart.

While many consider Dural's music with Buckwheat Zydeco to be feel-good, get-up-and-dance music, the new album opens with Memphis Minnie's song "When the Levee Breaks." Dural says the song acknowledges and honors the people of Louisiana after Hurricane Katrina.

"It's very relative to all the hardship that's going on back in Louisiana," Dural says. "It's hard when you see thousands and thousands of people that have been in one place for so many years and now have no place to stay. That really touches the heart."

The album's title track, "Lay Your Burden Down" — written by Gov't Mule and Allman Brothers guitarist Warren Haynes — features slow R&B grooves and brooding blues, making it something of a departure from Buckwheat Zydeco's typical sound. But the change seems to be more of a return to his early career as an R&B artist.

Dural says he grew up surrounded by music: His father played accordion to entertain the family, while his mother sang spirituals in the home.

"I was a very hardcore R&B performer as an organist on the Hammond B," Dural says. "And I was always into music: I played piano from age 5 'til 9, when I got my first organ."

Dural made his transition to zydeco and Creole music when he was introduced to one of his father's friends, Clifton Chenier — known as the "King of Zydeco." Chenier soon invited Dural to perform a gig as the organist in his group.

"We played for four hours nonstop," Dural says, "and then he was telling people goodnight and I couldn't believe it. I thought we had just got on stage; that's how much energy he projected. I wound up staying with Clifton for over two years. I said, 'Next band I get, I'll be playing accordion.' "

To hear the full interview with Buckwheat Zydeco, click on the "listen" link above.