Accessibility links
A California Town Squeezes Water From A Drought When Bolinas, Calif., nearly ran out of water, the town came up with a plan — cut household usage to 150 gallons per day, half the average U.S. home use. The whole town pitched in, including the kids. Late rains saved the water supply, but it was only a reprieve. 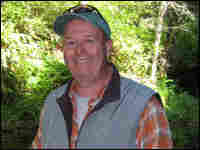 In January, Bill Pierce, with the Bolinas Community Public Utility District, realized that the town was going to run out of water by the end of April. He calculated a 150-gallon-a-day water ration for every household. That's half the U.S. household average. Cindy Carpien/NPR hide caption 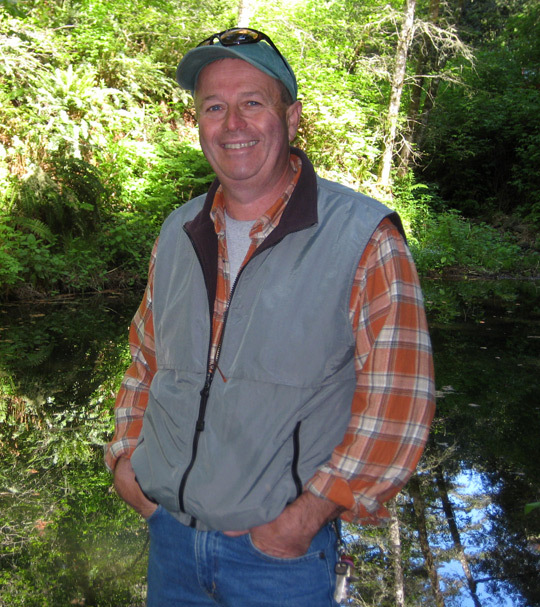 In January, Bill Pierce, with the Bolinas Community Public Utility District, realized that the town was going to run out of water by the end of April. He calculated a 150-gallon-a-day water ration for every household. That's half the U.S. household average. 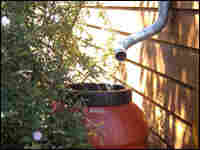 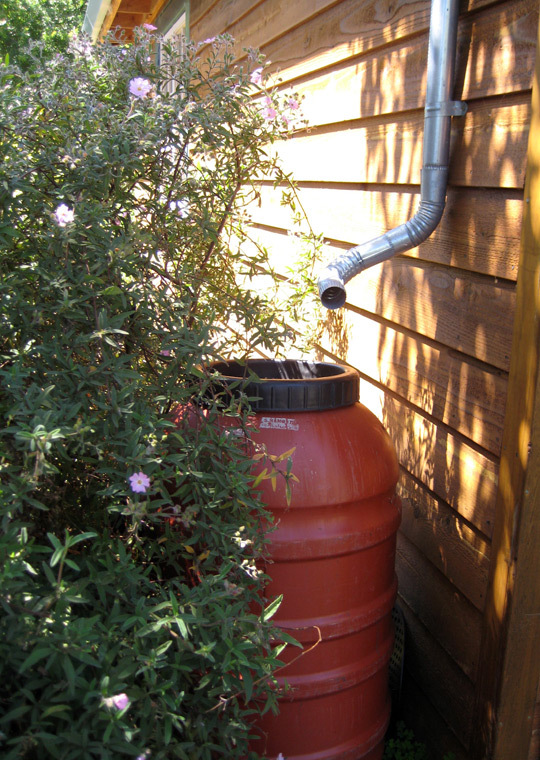 Bob Demmerle uses olive barrels to catch rain water. He uses the water for his garden. 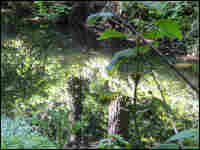 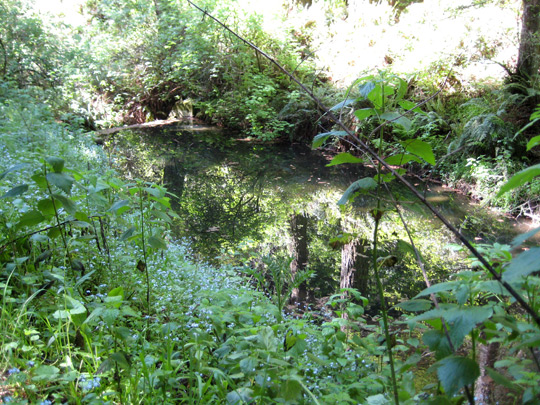 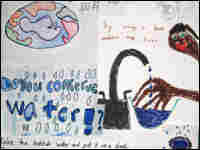 This sign at Bolinas-Stinson Elementary School encourages water preservation. The school has lowered its water usage by 35 percent, and the students have become experts at dispensing water-saving advice. Cindy Carpien/NPR hide caption 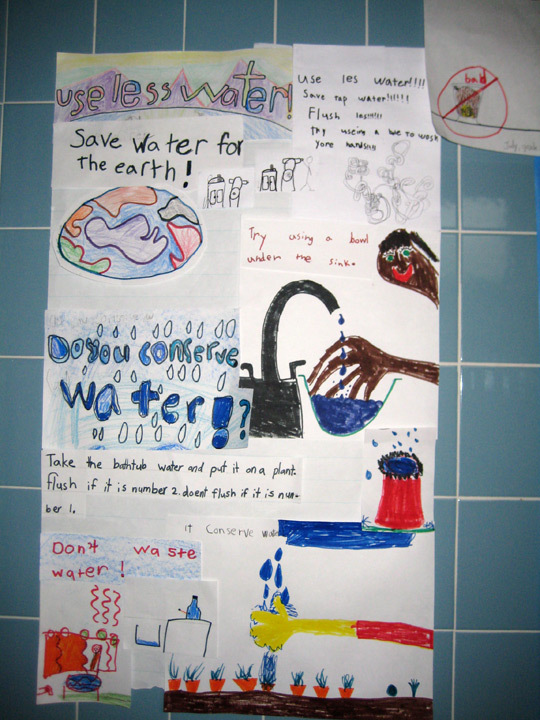 This sign at Bolinas-Stinson Elementary School encourages water preservation. The school has lowered its water usage by 35 percent, and the students have become experts at dispensing water-saving advice.

California is in the third year of a drought, and many cities and towns are calling for various forms of water rations.

But the northern California coastal community of Bolinas had to learn water conservation the really hard way. That's because the town almost dried up earlier this year.

The beginning of the rainy season turned into one of the driest winter periods on record for Bolinas. Every day, Bill Pierce, a 25-year veteran of the Bolinas Community Public Utility District, checked the town's main water source, the Arroyo Hondo Creek. But all he could do was pray for rain.

It's not easy finding the creek that slakes the village thirst. You drive up a narrow Jeep trail, then walk through dense stands of old growth Douglas fir until you stop in a clearing. It looks like an old swimming hole, 20 feet wide, about 28 feet long and 3 feet deep. It was created in the 1920s by a dam, only 15 feet wide.

During those dry months, Pierce watched the creek flow dwindle to a trickle, when it should have been roaring. By the end of January, the town had completely drained one of its two emergency reservoirs.

"We're in deep trouble here," Pierce finally realized. "Basically we were out of water, we just hadn't consumed it all yet."

Pierce figured, without any new rain, Bolinas would run out of water by the end of April. So he calculated the amount of water available, which needed to be spread out over 300 days until the next big rains were expected. And then he divided that number by the 600 households in town.

He came up with 150 gallons per day per house.

The average U.S. household of four uses about 400 gallons a day. Bolinas was already pretty good about water use, coming in below the national average. But now, residents had to be even more careful.

Mandatory rationing went into effect immediately. It required that every household (or water hook up) use 150 gallons a day or less, regardless of how many people it supported. All businesses and the town's only school were told to cut usage by 25 percent, which is the more standard way of rationing.

Home meters were checked randomly every day. If you went over the limit, you got a written notice. You were allowed only two. The third time, your water could be shut off. That's pretty harsh. But Pierce says, "There's only so much water. We've never been here before. This is new ground for us. It's new ground for most water districts, everywhere."

Before the rationing kicked in, a personal notification went out to every home that was already using more than the rationed amount, including the Zimmer-Demmerle family.

"I was surprised because not everybody got the letter, hand delivered, to their house and we were one of them," says Maud Zimmer.

Zimmer, her husband Bob Demmerle, and their two daughters, 9-year-old Ibarra and 5-year-old Zetana live in a house Demmerle built with water conservation in mind. They have low-flow toilets and a front-loader washing machine. But that wasn't enough.

"I realized we were going to have to change," says Zimmer.

So the family started to watch every drop of water. Most of it was just common sense. Dirty dishes were soaked in a bucket of soapy water in the sink during the day. Water was turned off in the act of brushing teeth. Showers were shortened. Ibarra easily recites this saying, when asked about toilet flushing: "If it's yellow, let it mellow. If it's brown, flush it down."

For the garden (filled mostly with low-water plants) Demmerle bought old olive barrels and placed them at all the roof downspouts. When rain finally did come, he was able to catch rainwater to nurture the garden. He covers all the barrels with screw-on tops and then transfers the water to a 1,500-gallon water tank.

But most importantly, the family began to read the water meter, something few Americans ever do. Demmerle and the family walk outside to the front yard to show off the meter. First, Demmerle takes off the cement lid and points to the dial. It's in cubic feet. Many Bolinas residents have learned to make the conversion. If they use 20 cubic feet a day, they know that's equivalent to 150 gallons.

"I came out for about 35 days in a row and read the meter every morning," Demmerle says. Before that, he knew his meter was there, but never looked at it.

"It's embarrassing," he says. "Mostly our family was letting water run down the drain."

During rationing the Zimmer Demmerles dropped below the minimum. But now Demmerle is worried.

"We stopped reading the meter," he admits, because the rationing was lifted after some late rains restored the reservoir. Now the town is in voluntary conservation mode. "And I'm wondering if we're getting a little sloppy with our water use," he says.

The Zimmer Demmerles needn't worry. The utility district tells us they're now using 100 gallons less a day from the same period last year.

While the ration was in effect, the town was 98 percent compliant. And since restrictions were lifted in mid-March, residents on average are keeping just below the ration amount.

That's very encouraging. But Seth Klein, who works for the utility district, says the town only had a reprieve with some late winter rains. He worries that if there's a major water main break or fire, the storage tanks could drain. "We're really one emergency away from a major crisis."

Bolinas' best investment in protecting its future water supply may be its children. During the rationing, the elementary school reduced its usage by more than 35 percent, and it's stayed that way. The students made graphs about water conservation and posters with reminders to turn off faucets and flush less, even at school. They took field trips to the town's water source and its two emergency reservoirs. They talked about things they can do to save water, too, and compiled a list of tips on how to save.

Principal Leo Kostelnik posted the school's water usage by the bathrooms every day. He says the students got a good lesson when a tour group of 11 people dropped by for a bathroom pit stop. "In about 15 minutes they used more water than we use in two days," he says.

"We're a public school," Kostelnik continues. "We understand that we're raising a generation of future citizens who are going to be running the place for us. And we want to help the kids understand that water conservation isn't a reaction to an emergency, it's a way of life."

1. Put a bucket in the shower and use that to flush the toilet. -- Orie Young

3. I bring a water bottle to school because when you drink out of the drinking fountain, 25 percent of the water goes down the drain. -- Ryder Wood

4. We fill up something in the sink with water and put soap in it and wash all the dishes in that. -- Orie Young

5. Fill your dishwasher completely before starting it. -- Eric Bell

6. If it's yellow let it mellow, if it's brown flush it down. -- Ibarra Demmerle

7. At home, don't turn the faucet on full when you wash your hands. -- Melea Emunah

8. My family puts coolers (or buckets) under the shower until the water gets warm and then we use that water to water the plants. -- Zoe Zaleski

9. Clean your driveway with a broom instead of a hose. -- Ariana Trubeyagnew

11. This was a really hard thing for me to do, but I did it anyway. I took five minute showers instead of 11 minutes.

13. A lot of people use way too much water when they're watering their garden. We got a new garden right around the time the drought started, so we couldn't use that much water to water our garden. Nothing really happened. The garden survived. -- Ryder Wood

The EPA looks at indoor water use
The EPA has launched a WaterSense program that helps you find products to reduce water usage
Eartheasy, a WaterSense partner, lists 25 ways to save water