Accessibility links
Heroic Obsession: Cavalli's 'Hercules In Love' When the powerful Hercules falls in love with his future daughter-in-law — whose father he has just murdered — he finds himself caught between dueling goddesses and besieged by the ghosts of his former victims.

Netherlands Opera on World of Opera -- 'Hercules in Love'

From The Netherlands Opera

Netherlands Opera on World of Opera -- 'Hercules in Love'

In Act Two, Deianira sings a moving lament after learning that her husband Hercules intends to betray her with their son's lover, Iole. Soprano Anna Maria Panzarella sings Deianira in the Netherlands Opera production.

Deianira's Lament from "Hercules in Love"

Hercules' dramatic death scene, in Act Five, is a great example of the highly emotive, declamatory style of vocal writing that was essential to opera in the early and mid-1700s. It's sung here by Luca Pisaroni.

Death of Hercules from "Hercules in Love" 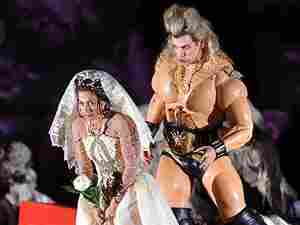 Here's the story: A well-known married man has a torrid affair with his son's fiancee. All the while, he stays married and she continues to plan her own wedding — but they keep meeting for increasingly obsessive trysts. Of course, this dangerous triangle can't last forever, and it ends badly for all concerned.

Recognize that little synopsis? If you thought of Josephine Hart's sensational bestseller Damage or Louis Malle's film version of the book with Jeremy Irons and Juliette Binoche, score two points. But if you also remembered a 340-year-old opera by Francesco Cavalli, called Hercules in Love, go to the head of the class.

Cavalli was born in 1602, not long after the earliest operas were written. By the time he died in 1676, the brand-new entertainment called opera had taken Europe by storm, and Cavalli had become one of its most famous composers. Cavalli spent much of his career in Venice, where many of his operas were written for the festival season, when people tended to throw caution — and scruples — to the wind. Maybe that's why many of his dramas have decidedly amorous, and at times downright kinky, plotlines.

Hercules in Love — or Ercole Amante — was composed for a decidedly different occasion. It was commissioned for a 1662 performance in Paris, to celebrate the wedding of King Louis XIV and Princess Maria Theresa of Spain.

Fittingly, the opera begins with a theatrical bow to the royal couple and ends with the depiction of a happily married god and goddess — another tribute to Louis, the "French Hercules," and his new bride. In between, the drama portrays some markedly less savory relationships, including the one between Hercules and Iole, his future daughter-in-law.

Over the centuries, opera has become known and loved for combining a whole raft of artistic ingredients in a genre that, at its best, packs a wide range of dramatic and emotional experiences into a single evening's entertainment. The works of Cavalli prove that opera had that potential right from the very start.

On World of Opera, host Lisa Simeone presents Hercules in Love in a production from the Netherlands Opera in Amsterdam. It features bass-baritone Luca Pisaroni as Hercules, tenor Jeremy Ovenden as his son Hyllos, and soprano Veronica Cangemi as Iole, the young woman caught between them.

The Story Of 'Hercules In Love' 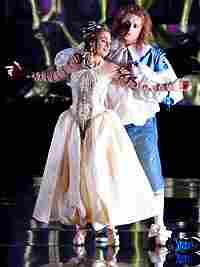 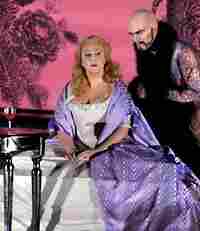 The opera's formal Prologue is played out in honor of the occasion for which it was composed: the wedding of the French King Louis IV and Princess Maria Theresa — and sets the allegorical stage for the action that follows.

ACT ONE introduces us to Hercules, and he's got problems. He's already married to Deianira, but he's in love a younger woman — a beauty named Iole. Hercules' first difficulty is that Iole is in love with Hyllos, Hercules' own son. And there's another problem: Hercules has killed Iole's father. Needless to say, Iole wants nothing to do with Hercules, and who can blame her?

So Hercules is frustrated, and in more ways than one. His strength is legendary, but when it comes to matters of love, he's... well, impotent. (Hercules is also without benefit of modern pharmacology.) He does, however, have the goddess Venus at his disposal, and she's anxious to help him with his love life. She tells him to arrange a meeting with Iole, where Venus will use her powers to make sure he gets what he's after.

But when Venus leaves, we see that Juno, a more domestically minded goddess, has been watching all this — and she's ticked off. She vows not to stand by and watch while Hercules betrays his wedding vows with his son's lover.

In ACT TWO, as Hyllos and Iole are amorously engaged, a page arrives with a message for Iole, from Hercules. He wants to meet her that night in the garden. Iole doesn't think she has much choice, so she agrees to meet Hercules and sends the page back with her acceptance. Meanwhile, the page runs into one of Deianira's servants, Lycas, and they talk about Hercules' infidelity. Deianira overhears, and sings a moving lament.

Juno then approaches the god Sleep, who reports to his wife, Pasithea. Seeing a chance to put Hercules out of commission for a while, Juno wants to borrow Sleep for a couple of hours, and Pasithea agrees.

For the start of ACT THREE, Venus comes down from the clouds. She tells Hercules that Iole has been seen "in flagrante" with Hyllos. Hercules is furious that his own son is complicating his conquest of Iole. But Venus assures him that she'll back him up when Iole arrives.

Iole does keep their date, and Hercules asks why she doesn't want him. She brings up the fact that Hercules murdered her father. Hercules says he only did that because her father refused to let Iole marry him. Iole replies that her father was obeying her wishes. Hercules, true to form, says that makes it her own fault that her father is dead.

With this conversation going nowhere, Venus intervenes. She has conjured up a magic couch, and when Iole sits on it, she suddenly finds Hercules irresistible. Hyllos, who has been watching all this, thinks he's being betrayed, and leaves to throw himself off a cliff. Then, just in time to save Iole's virtue — and Hyllos' life — Juno shows up with the god of Sleep in tow.

Soon, Hercules is sawing logs — dead to the world — and Juno gives Iole a sword, advising her to use it on Hercules. Iole is just about to kill him when Mercury appears, flaps his wings and wakes Hercules up.

Hercules thinks that it's Hyllos who wants him dead, and determines to kill his own son. Iole says that would pretty much end Hercules' chances with her, so he backs off. He banishes Deianira, and has Hyllos imprisoned in a tower. Mother and son sing a sad goodbye, as Lycas and the page denounce the treachery of love.

ACT FOUR begins along the shore, beneath the tower where Hyllos is held captive. Hyllos is stewing about his father's cruelty when he spies the page sailing up in a boat. The page has bad news. Iole has decided she must marry Hercules, to save Hyllos.

pHyllos sees that as the last straw. He leaps out of the tower, and into the ocean. But Juno is still on his side. She sees the suicidal plunge and rings up the sea god Neptune, who pulls Hyllos out of the water, no worse for wear.

Iole and Deianira then go to the cemetery where Ione's father Euritus was buried after Hercules killed him. When the two women appeal to Euritus for assistance, his ghost appears and promises to help.

In the fiery scene that opens ACT FIVE, the ghost of Euritus summons the spirits of more of Hercules' victims, who all hope their killer gets what's coming to him.

Meanwhile, Iole and Deianira are both grief-stricken, thinking that Hyllos has jumped into the sea and drowned. But they're reminded of a trump card they've held all along. Deianira has a bloody shirt, once warn by the centaur Nessus. The legend is that if Hercules wears that magical shirt, he'll forget all his loves, except for his wife.

As the final scene begins, Hercules feels that he's defeated his enemies. After all, his wife and son are out of the way, and he's about to marry the woman of his dreams, Iole. He calls for her. But when she greets him, she also suggests that he put on the centaur's bloody shirt — and he does. Instead of simply making him forget his illicit love, it burns him, and Hercules dies a slow and tortuous death.

Just then, Hyllos returns. He's upset about his father's death — but it does leave free Iole to marry him. And it seems things didn't turn out so badly for Hercules, either. He's not really dead, much less in Hades. Instead, he's alive and well in heaven, and happily married to La Bellezza, the goddess Beauty. With that, the opera ends, with a ringing tribute to the real life couple for whom it was written: the "French Hercules," King Louis XIV, and his Spanish bride, Maria Theresa.