Accessibility links
A Frank Lloyd Wright Masterwork, In Legos The latest building blocks in Legoland might be a tough sell for the little ones. The company just announced new designs based on the architecture of Frank Lloyd Wright. 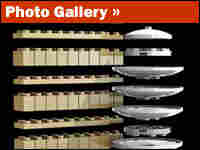 The latest building blocks in Legoland might be a tough sell for the little ones. The company just announced new designs based on the architecture of Frank Lloyd Wright.

The first design is New York's Guggenheim Museum, with its unmistakable, majestic cylindrical stacks. It's hard to imagine building that from the Lego bricks you had as a kid, but the man behind the designs says all the pieces in the kit are "standard bricks and plates."

"That one's actually interactive," Tucker says. "It actually comes apart in a puzzlelike formation so you can get into the guts of the building and see the levels, understand his use of cantilever and how the forms play together."

The Lego version of the building can even be lifted off its base. "What's neat about that is people can actually see how the foundation of a structure is rooted into the environment," Tucker says.

Tucker gave up life as an architect three years ago to create Lego art. Since then, he's developed a number of complex, stunning structures: The John Hancock building, the Seattle Space Needle — even the Empire State Building.

Lego's Frank Lloyd Wright collection will be available in stores soon. The Guggenheim will go for about $40, and Fallingwater will set you back close to $100. But are there enough architectural Lego fans to make these designs a hit? Tucker hopes so.

"Partly the idea behind this is branching out to a new audience," he says. "And it's something that kids of all ages — adults alike — can play with and build and learn."

He hopes that while Lego fans enjoy themselves, they'll also learn to appreciate the architecture that went into the actual buildings. There's a booklet that comes with the set for just that purpose.

"It briefly touches on some of the architectural significance and some of the history — just enough to keep you interested, but not enough to put you to sleep," Tucker says. "Like many of the classes that I had in college."