Accessibility links
Without Meters, Fresno Water Beyond Measure California is tight on water, but you can't control what you can't measure — and Fresno has no meters. Perhaps that's why residents of the city use nearly three times as much water as the national average — more even than Las Vegas. 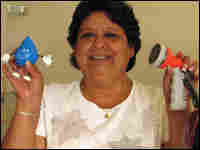 Mary Ann Evans received gifts from the city of Fresno for inviting the "sprinkler wranglers" over to her house to slow down her water waste. Nora Laikam for NPR hide caption 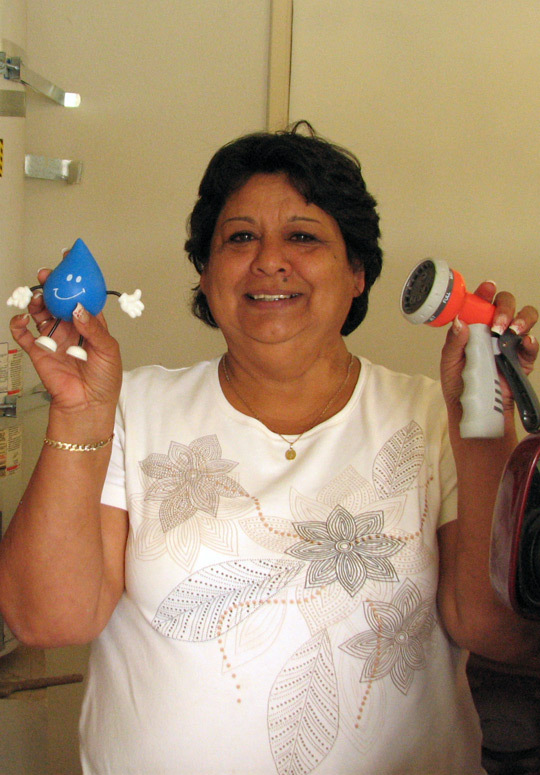 Mary Ann Evans received gifts from the city of Fresno for inviting the "sprinkler wranglers" over to her house to slow down her water waste.

A California Town Squeezes Water From a Drought May 26, 2009
Calif. Water In Short Supply, Restrictions In Place May 18, 2009
Drought, Politics Trouble Farmers In California May 11, 2009

With concerns over the future of California's water supply, Gov. Arnold Schwarzenegger is pushing for all residents to reduce their water consumption 20 percent by 2020.

But that could be a tough goal to meet when there are still cities in the state without residential waters meters. Even the state capitol, Sacramento, is not expected to have meters fully installed until 2025.

In the arid San Joaquin Valley, south of Sacramento, 55 percent of residents are currently not metered. Fresno, the region's largest city, charges single-family households a flat rate, regardless of how much water they use.

"Can you imagine what our energy consumption would be like if electricity was at a flat rate?" he asks.

McIntyre is passionate about water meters. He tried for 15 years, through conservation programs, to bring down Fresno's residential water use. But without meters, McIntyre says, there's no measuring the waste and no cost incentive to conserve. And this is probably why Fresno is among the highest urban water users in the country.

Why is it so hard for an area like California's Central Valley to switch to meters? For one thing, it's public perception, McIntyre says.

For decades, water has flowed to farms and cities through state and federal projects.

"If you've always had something and it feels free, that's a hard thing for people to give up," he says.

In the 1990s, McIntyre fought for a voluntary meter program in Fresno and some 8,000 customers agreed to have meters installed. But then, a vehement group of taxpayers convinced city leaders to incorporate a "no meter policy" into Fresno's city charter. McIntyre gets almost teary-eyed recalling the defeat.

"The meter opponents succeeded and meters were banned for single-family residential units," he says. "So we had to pull the meters out."

McIntyre had to wait another decade before a group of state legislators passed a law that trumped Fresno's charter. It required certain cities that use water from federal dams to install meters by 2013.

But that's still four years away.

In the meantime, Fresno residents are using on average, just under 290 gallons of water per person per day. That's more than Las Vegas, which is close to 250. The U.S. average, according to the United States Geological Survey, is 100 gallons a day.

Mary Ann Evans, a Fresno resident who considers herself water-conscious, sees the link between water use and the lack of meters. She believes her neighbor is sneaking around at odd hours to water his lawn, despite the city's sprinkler restrictions.

"He's one of those guys who thinks he's beating the system. He waters way early in the morning and way late at night," she says. "You don't get green grass if you're not watering. It's green!"

On a recent afternoon, Evans waits for conservation specialists to check her leaky sprinkler system. The city has a small team of people who will make house calls about sprinklers or leaky toilets or malfunctioning showerheads. They come armed with wrenches and pliers.

Marilyn Creel tinkers with Evans' sprinklers so they aren't running down the sidewalk and into the gutter. Her partner, Nora Laikam says the office is seeing a bump in calls now that word is out that meters are coming.

"They're getting a little nervous," Laikam says. "'Ooh, I've had this leak for a long time. And I probably should get that fixed.'"

When they are done wrangling with the sprinklers, Creel and Laikam give Evans some gifts for calling them out to the house. She receives a water-saving spray nozzle for her garden hose. Plus, she is handed a soft blue toy in the shape of a water droplet to remind her that conserving water is a really good thing.