Accessibility links
Alzheimer's Claims Painter's Memories, Not Art Seven years ago, Ken Rabb was a legal aid lawyer and a weekend painter. But at the age of 53, he was diagnosed with young onset Alzheimer's. Although he talks relatively little now and can no longer read, his art has flourished and he spends much of his time painting. 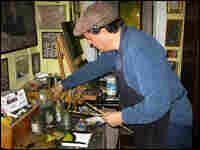 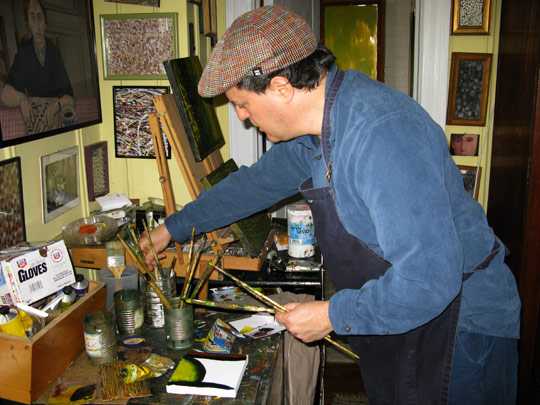 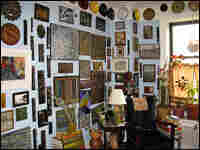 The walls of Rabb's apartment are covered with his paintings. Margot Adler/NPR hide caption 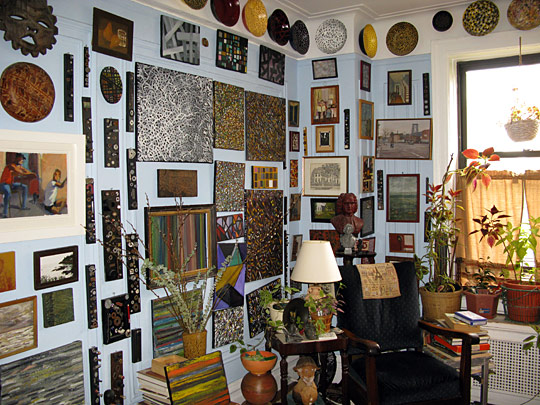 The walls of Rabb's apartment are covered with his paintings.

Seven years ago, Ken Rabb was a legal aid lawyer and a weekend painter. But at the age of 53, he was diagnosed with young onset Alzheimer's.

Soon he was on disability and unable to work.

Although he talks relatively little now and can no longer read, his art has flourished and he spends much of his time painting.

Stuart Post, Rabb's partner, says once upon a time, Rabb was an intensely intellectual person.

"It's amazing to me that there was a time I was hanging out with someone who read the New York Review of Books, and of course all of that is gone," Post says." In those days, they spent time doing competitive crossword puzzles and having heated discussions.

His apartment is stunning and unexpected. His art is everywhere. Years ago, he considered himself a hobbyist painter and agonized over his technique. Now, his art is no longer an intellectual process; it is color, form and shape. Every inch of wall space is taken up with abstract oil paintings, painted plates and collages of found objects.

He says he gets many of the items in his collage from the street. "If I am walking around and see something, I pick it up."

Some of his pieces involve thin metal strips on wooden blocks. When asked what they are, he doesn't remember.

Hart says they are the bristles used by street cleaning trucks.

She says Rabb is definitely in the middle stage of the disease. His language has become more limited, and he has problems following the plot of a film. He also doesn't recognize himself in the mirror.

When asked how much time he spends on his art each day, he doesn't know.

But then something will grab him and for a minute he's suddenly more there. At one point, he takes out a tiny bust of Franklin D. Roosevelt, his favorite president.

"This was really cheap at the flea market," he says. "I think he's great."

Hart says that Post has been very creative in designing Rabb's home care. He didn't simply want an aide.

"Stuart uses the word 'peer,'" she says. He wanted "someone who goes to museums, who reads books like Kenny read when he read books." Hart goes through his photo albums, meets his friends and talks about stories from his past, she says, "so we can be his memory for him."

Since Rabb is healthy and robust, he and Hart spend hours every day exploring the city, going to all five boroughs, to museums, stores and galleries.

Post says he knows they are very lucky. They don't have kids. Rabb doesn't have a mortgage. He has no one to support and he has some money from his family. So they have been able to expand the period where he can have a rich and enjoyable quality of life.

He knows that Rabb's needs are going to be different in four years or so, but he believes that it is important to spend the money now, during a period where quality will make a big difference in Rabb's life.

He also realizes that "the writing is on the wall."

"I know," Post says, "that despite my best efforts, there is going to come a time soon where I can't change it. I can't hug Ken and say everything will be all right. Everything is not going to be all right."

In Harlem at the Cafe Tanto Dulce, you can see some of Rabb's paintings on display. They've already sold a number of them to raise money for Alzheimer's research.

Suddenly, Rabb bends down and picks up something from the street. It's one of those metal bristles from a street cleaner.

Even with Alzheimer's, Rabb notices things. Perhaps it's these small objects — a piece of metal on the street — that continue to give joy to his day.