Accessibility links
Iraqi Translator, U.S. Soldier Reunited In U.S. Ali Jabber Yasary served as a translator for the U.S. military in Iraq until the violence in his country forced him and his wife to flee. Now, with the help of an American soldier he worked with in Iraq, Yasary has a new home in California. But thousands of other Iraqis who served U.S. forces in Iraq are still waiting. 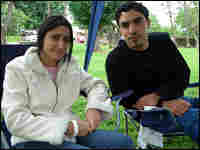 Ali Jabber Yasary, an Iraqi translator for U.S. troops, and his wife, Sura Asady, fled their home for temporary refuge in Jordan until they were granted entry to the United States. Deborah Amos/NPR hide caption 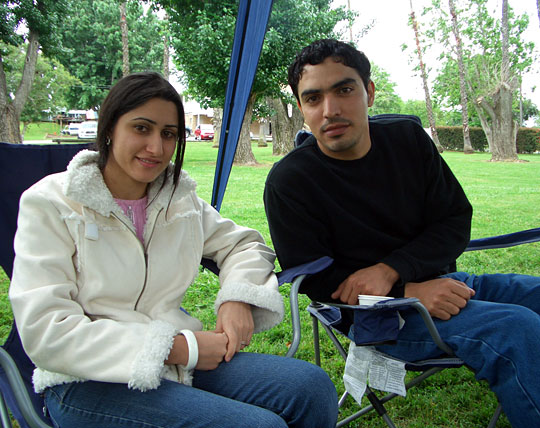 Ali Jabber Yasary, an Iraqi translator for U.S. troops, and his wife, Sura Asady, fled their home for temporary refuge in Jordan until they were granted entry to the United States. 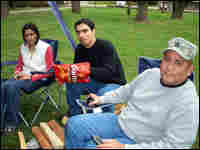 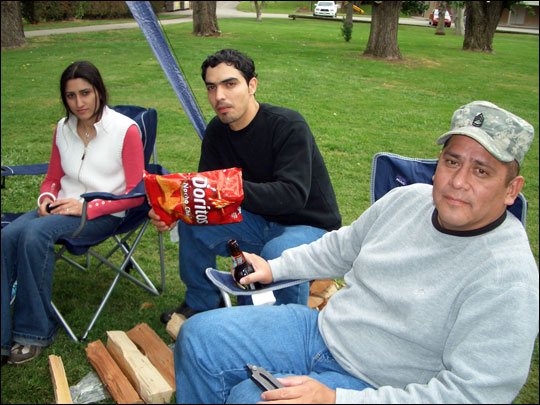 Juan Estrada and the Yasarys at a recent reunion of Iraq war veterans from Estrada's National Guard unit. Estrada helped the couple reach the United States and settle in California.

Advocacy groups say more than 100,000 Iraqis have worked as translators for the U.S. military since the 2003 invasion. More than 20,000 have applied for resettlement, but only about 4,000 have actually arrived in the United States. NPR revisits an Iraqi translator we first met in 2007 when he and his wife had fled Iraq and lived as refugees in Jordan. Eventually, they were allowed to enter the United States and settled in California.

No one knows better than Juan Estrada about the value of having a reliable guide in a foreign land. Estrada, a National Guard sergeant from California, served in Iraq and depended on an Iraqi translator named Ali Jabber Yasary, who risked his life alongside the U.S. troops.

Now, the roles have reversed.

After fleeing Iraq for Jordan in September 2006, Ali and his wife, Sura, finally made it to California in April 2008 and moved in with Estrada. He helped them obtain work, a driver's license and a car.

In essence, Estrada is the Iraqi couple's guide for the difficult transition to life in America.

Helping His Iraqi Translator, At A Cost

Estrada, a fit, compact man still on active duty in the Guard, says he owed it to his friend Ali. But, he says, it also cost him his family.

He split with his wife and college-aged son and daughter after Ali and Sura arrived. The family never understood why he brought the Iraqis home, Estrada says. The long separations of military life had been a strain, and the new guests led to the final break.

"Because they came to live with us, I set them up a room in the house. This little room in this peaceful world, near my family. But they [the family] didn't accept that," Estrada says.

So Estrada bought a house for himself and his new Iraqi family. He says his wife and children were convinced that this behavior was some sort of delayed reaction from the war.

"I said, 'Hey, this is the right thing to do. I'm sorry you are uncomfortable and you don't understand Arabs or whatever that might be, you know.' Even in our reunion, Ali is the reminder, a good reminder, of something good that we did over there," Estrada says.

Estrada's National Guard unit holds a reunion once a year east of San Francisco, a weekend of fishing and outdoor cooking. Most of the Iraq war veterans have returned to civilian life. They have added pounds and gained a few more children. There are new marriages, more divorces.

The yearly retreat is, in part, therapy, says Mike Gorski. "We tell the same stories every year and go over the same things, but the Army's changed. We've changed," he said.

The veterans look after each other more, says Gorski, because Iraq brought them closer together.

"I think what Iraq had taught me is the key is really focusing on the family and keep that bond. As Americans, I think we have lost the boat on the family," he says.

Part Of An American 'Family' Now

Ali, 30, and Sura, 22, are part of this family now. The former Iraqi translator has learned volleyball, as has his wife.

Her transformation is remarkable, from a quiet young woman in a head scarf in Jordan two years ago to a confident English speaker, her hair flying uncovered as she smashes the volleyball over the net.

"If you can get into the school program, we can cover it. It's not that expensive. We can make it," he tells him, offering financial support the other men from the Guard unit will back.

The support is significant. Most refugees resettled in the United States are struggling in the sour economy. Some are desperate because they have become homeless. Others have gone back to Iraq.

Estrada does not want that to happen to Ali and Sura.

"The Iraq war is a chapter in my life. Iraq is part of my life. Does that make sense? And that's because of them," Estrada says.

We broke Iraq, and now we have to fix it, says Estrada in the way of an explanation. He has been called up for duty in Baghdad again. He leaves in a few months. Then, Ali will worry about Estrada in such a dangerous place.

And he will be forever grateful.

"If you tell this story to anyone, you won't believe it. They say, 'I can't believe that an American, an individual American soldier, helped an Iraqi translator. It never happened.' But see this great guy, he just stayed with me until now, until this moment, and I really appreciate it," Ali says.