Accessibility links
Military Gig Is No Joke For 'Daily Show' Funnyman Rob Riggle is best known as one of the comedy "news" correspondents on The Daily Show With Jon Stewart. But he recently earned a promotion in his other job: as a Marine reservist. Riggle says the role, which has taken him into combat zones, "has definitely served my comedy." 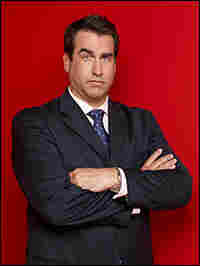 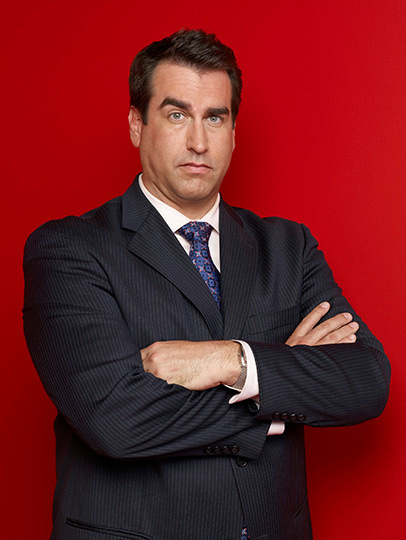 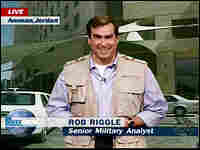 As a Daily Show correspondent, Riggle reported from blue screens around the world. As a Marine, he served in Liberia, Kosovo and Afghanistan. Comedy Central hide caption 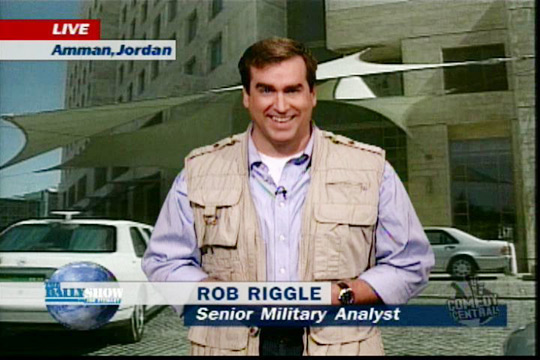 As a Daily Show correspondent, Riggle reported from blue screens around the world. As a Marine, he served in Liberia, Kosovo and Afghanistan.

Some comedians you just shouldn't mess with. Especially if they've been trained by the Marines.

Rob Riggle is best known as a comedy "news" correspondent on The Daily Show With Jon Stewart. But he's also got another gig: as a Marine Corps reservist.

As he said when he was a correspondent on The Daily Show, training in the Marines was no walk in the park.

Still, Riggle must be doing something right, because he was recently recommended for promotion to lieutenant colonel in the Marine Reserves.

When he's not on set or performing, Riggle is a public affairs officer, training fellow Marines in how to respond to media requests. He's stationed out in Los Angeles now, but in the days before he sparred on late-night television with Jon Stewart, he served in Liberia, Kosovo and Afghanistan.

"I remember as a service member, when I deployed and was serving in a forward area, I never got a USO show," Riggle tells Liane Hansen. "I always said to myself, if I ever got into a position where I could go and perform and entertain the troops, I was going to do it."

He got that chance in 2007, traveling to Iraq as a correspondent for The Daily Show. Riggle's segments for the comedy news show featured many of his fellow Marines.

"They were still on 15-month deployment, and we were the only slice of America that they got to see the whole time they were over there," Riggle says. "So it meant a lot to me to be able to go over and do that for them."

Plus, he says, it was good research. "I know that being in the Marines has definitely served my comedy," Riggle says. "It's a character study for me."

"One of my favorite games to play in comedy is 'arrogant ignorance,'" he says. "I love being the big guy in the room that knows it all, but he's got it all wrong. And believe it or not, I met a couple of those guys during my time."