Accessibility links
St. Vincent Interview: Annie Clark, Shredding To 'The Wizard Of Oz' Songwriter Annie Clark, who records under the name St. Vincent, is known for combining prodigious guitar technique with cinematic, orchestral pop. But on her new album, Actor, she actually turned to films for inspiration.

Listen to an entire St. Vincent concert, recorded live at the Black Cat in Washington, D.C.:

Watch St. Vincent rehearse "Actor Out Of Work" at SXSW 2009: 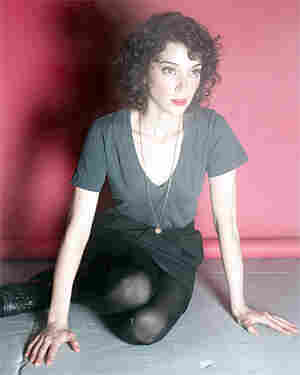 A great movie can leave you emotionally spent once the credits start to roll. Weren't you all twisted up inside at the end of Casablanca? Overjoyed with The Wizard of Oz? Floored after Chinatown?

Songwriter Annie Clark took those emotions and put them to work.

Clark records under the name St. Vincent, and her newest collection of songs was at least partially informed by the way her favorite movies made her feel. She would watch a film from beginning to end, then, in the glow of the screen, she would imagine her own score, mixing spur-of-the-moment musical ideas on her computer.

"Well, the truth is that I had come back from a pretty long — you know, about a year-and-a-half of touring, and so my brain was sort of all circuit boards that were a little bit fried," Clark says. "So I started watching films as sort of a way to get back into being human. And then it started to just really inform the entire record."

The new song "Marrow," for instance, comes out of the scene in The Wizard of Oz where Dorothy is first introduced to the Wizard.

"I felt like I wanted to create something that was Technicolor, was visual as much as musical," Clark says. "And also lyrically — this person wishing they had a spine made of iron — it's sort of along the thematic lines of The Wizard of Oz."

Clark employed a wide sonic palette for her St. Vincent project — you're as likely to hear loopy clarinets and flutes as Clark's voice and shredding guitar.

"Because I got so obsessed with the idea of being a filmmaker who was making music, I started to think about casting in terms of the instrumentation, and started thinking, 'Oh, well, the woodwinds will be this thing that represents this absolute purity and whimsy,' " she says. "And then the guitar will be this sort of scary monster that comes in and threatens to topple the entire piece."

Clark says she got the ideas behind "The Strangers" from Snow White and the Seven Dwarfs.

"The passages with the woodwinds and the vibrato voices — I was inspired by the scene where Snow White is singing at the well," she says. "I just have such a soft spot for those Disney films. I feel like I felt when I was 5 and I first saw them."

Clark hasn't scored any actual films yet — but she says she'd welcome the invitation.

"I would love to," Clark says. "I often wish — not that I was an actress — but I often wish I was actually just in a Woody Allen film."

If she was given the opportunity, she says she would probably approach it the same way she did Actor.

"Well, I've been recording myself on a computer since I was about 13 or 14," Clark says. "So it's completely entwined with my creative process. Essentially, it allows you to make music that's better and smarter than you are, by using your ears to lead the way. So you're not limited by your own physical abilities if you don't have the muscle memory to move your hands that fast — it doesn't matter; you can still create something that your ear wants to hear."