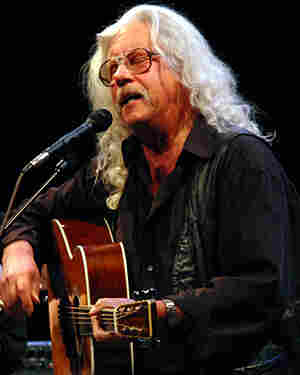 In addition to his own iconic status as a folk singer, Arlo Guthrie carries on the name and legacy of his father, Woody Guthrie. Arguably the most important singer and songwriter in American history, Woody's songs, poetry and prose spoke to the underappreciated, underserved and underrepresented common man. His songs about fascism, inequality and unionizing remain powerful nearly a century later.

In 2007, Arlo teamed up with his son, Abe; daughter Sarah Lee Guthrie; her husband, Johnny Irion; and steel-guitarist Gordon Titcomb, to tour as the Guthrie Family Legacy. Revisited here is a February 2007 performance the family gave on Mountain Stage, performing the songs of Woody's career from his earliest days on California radio to the lyrics he wrote but never recorded.

Sarah Lee Guthrie and Irion, touring performers themselves, sing their own song "When the Lilacs Are In Bloom," and "Another Man's Done Gone," a later-period song by Woody Guthrie never recorded until Billy Bragg and Wilco performed it for the album Mermaid Avenue. Sarah Lee's "Mornin's Over" and Irion's "Brush Your Teeth Blues" are also included. Inspired by the events surrounding Hurricane Katrina, Arlo penned "In Times Like These," which would be the title track of his album backed by the University of Kentucky Symphony Orchestra.

Mountain Stage host Larry Groce asked Arlo to lead "The City of New Orleans," a song he popularized in 1972, after the broadcast credits are read. The other guests of this concert, Jorma Kaukonen, Uncle Earl and John Hammond, can be heard later this week at NPR Music.