Accessibility links
Sotomayor: 'Always Looking Over My Shoulder' U.S. Supreme Court nominee Sonia Sotomayor has come far from the poor Bronx neighborhood where she grew up. She has earned praise for her penetrating questioning and thorough preparation on the bench, though some describe her style as overly aggressive.

Sotomayor: 'Always Looking Over My Shoulder'

Sotomayor: 'Always Looking Over My Shoulder' 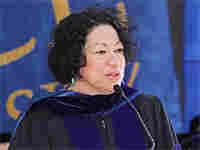 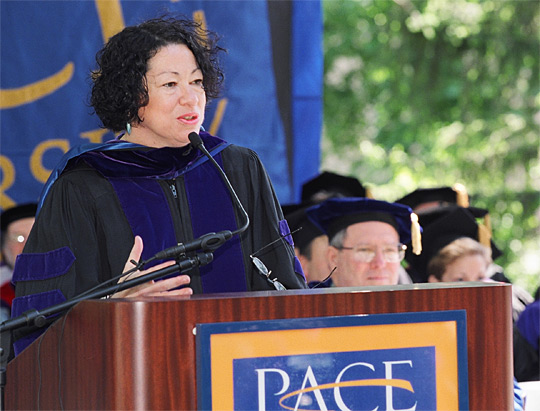 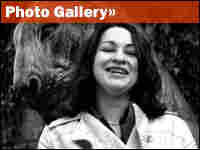 Quote (from 1997 nomination hearing): "I don't believe we should bend the Constitution under any circumstance. It says what it says. We should do honor to it."

Judge Sonia Sotomayor is a self-described "Newyorkrican," the daughter of parents who moved from Puerto Rico to the Bronx. In speeches to Latino groups, she has echoed some of the same themes as President Obama about growing up as a minority and feeling she never completely fit in anywhere.

"I am always looking over my shoulder, wondering if I measure up," she has said.

Sotomayor, 54, was nominated by Obama Tuesday to replace retiring Justice David Souter. If confirmed, she will be the first Hispanic justice — and third woman — to serve on the nation's highest court.

As a judge, Sotomayor has earned praise for being thoroughly prepared and for her penetrating questioning, though some have described her courtroom style as overly aggressive. In announcing his choice, Obama praised her "rigorous intellect" and called her an "inspiring" woman with a "depth of perspective."

A Childhood In The Bronx

Sotomayor was raised in the New York City borough of The Bronx. She was diagnosed with juvenile diabetes at age 8. Her father, a factory worker with a third-grade education who did not speak English, died a year later. Her mother, a nurse, raised her two children in a Bronx housing project near Yankee Stadium, working six days a week to send Sonia and her brother to Catholic school.

Sotomayor has recalled how her mother always kept a pot of rice and beans on the stove for friends, and how her family had the only set of encyclopedias in the neighborhood.

It was as a child that Sotomayor became intrigued by the law. She first wanted to be a police detective, inspired by Nancy Drew mysteries. But a doctor suggested that would be difficult with diabetes. So Sotomayor settled on being a judge instead, after watching an episode of the popular TV show Perry Mason.

"I realized that the judge was the most important player in that room," she said.

Obama administration officials say Sotomayor would bring more judicial experience to the Supreme Court than any justice confirmed in the past 70 years. She has worked in Manhattan as a prosecutor and then an attorney and has spent the past 17 years as a judge.

In 1991, President George H.W. Bush nominated Sotomayor as a judge on the U.S. District Court in New York, making her the youngest judge in that district. She won Senate confirmation without dissent. But that wasn't the case in 1998, when President Bill Clinton named her to the Second U.S. Circuit Court of Appeals. Republicans delayed her confirmation for more than a year, in part because they believed that as a Hispanic she could well be chosen later for the Supreme Court. She was eventually confirmed, 67-29.

As Obama noted in his remarks Tuesday, one of Sotomayor's most famous rulings earned her gratitude from baseball fans, when she ended a Major League Baseball strike in 1995. "Some say that Judge Sotomayor saved baseball," Obama said to applause. A lifelong fan of the game, she described her decision as being like "when you see an outfielder backpedaling and jumping up to the wall and time stops for an instant as he jumps up and you finally figure out whether it's a home run, a double or a single off the wall or an out."

Sotomayor also sided last year with the city of New Haven, Conn., in a discrimination case brought by white firefighters. After too few minorities scored high enough on a promotion exam, the city threw out the results. Conservatives have criticized that ruling and the case is, ironically, now before the Supreme Court.

The conservative Judicial Confirmation Network calls Sotomayor a "liberal judicial activist of the first order." Many expect that, like Souter, she would routinely side with the court's four-member liberal minority.

But not all her rulings can be so neatly categorized. In 2002, Sotomayor ruled against an abortion rights group that had challenged a federal policy prohibiting the denial of U.S. funds to foreign groups that supported abortion. In her opinion, Sotomayor wrote that the government was free to favor the anti-abortion position if it chose.

In other high-profile rulings, she ruled that The Wall Street Journal had the right to publish the suicide note of former Clinton White House aide Vincent Foster, and she ruled against a state prison regulation that prevented people from wearing beads to thwart evil spirits. She also allowed the display of a 9-foot-tall menorah in a suburban park.

A First For Hispanics

Until now, some Hispanics had been disappointed in Obama's failure to appoint more Latinos to his Cabinet and other high offices. But the nomination of Sotomayor may go a long way to assuage that.

Hispanics turned out in huge numbers for Obama in last fall's election, and they are the nation's fastest-growing minority. Sotomayor has spoken publicly about her pride in being Latina and admitted that it no doubt affects how she views cases from the bench.

"I simply do not know exactly what the difference will be in my judging," she said in a speech in 2002, "but I accept there will be some based on my gender and my Latina heritage."