Accessibility links
Peter Bjorn And John: Beware Of The Rock Peter Bjorn and John's pop sensibilities are plenty charming, as is the group's on-stage banter. At the ME Television Studios in Austin, Texas, the Swedish trio played electronic-influenced new material, but was bursting with rock 'n' roll energy.

Peter Bjorn and John in Studio on KEXP

Listen
Peter Bjorn And John: Beware Of The Rock

Peter Bjorn And John: Beware Of The Rock

Peter Bjorn and John in Studio on KEXP

Peter Bjorn and John's pop sensibilities are plenty charming, as is the group's on-stage banter. It showcased both at our SXSW broadcast in Austin, Texas, this past March, as its members combined melodic electro-pop songs with quirky European humor. They teased our sound engineer and invited the audience to sing along. After Peter Bjorn and John kicked off the set with "Blue Period Picasso," Peter Moren exclaimed, "Yes, give it up for the song name!" — throwing in a little Modern Lovers shout-out for good measure. 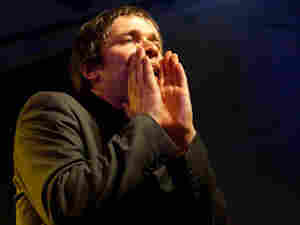 Peter Moren of Peter Bjorn and John gives a holler at the ME Television Studios in Austin, Texas. Jim Bennett hide caption

The new songs may have an electronic feel to them, but all three guys were bursting with rock 'n' roll energy, jumping in the air as they played and even running off stage and into the audience. At one point, Moren warned the crowd, "Beware of the rock!" It was only 3 p.m.

They also showed that even a technical malfunction can't bring them down: At the end of "Nothing to Worry About," John Eriksson's drum machine stops working. At first, he beatboxes, but then he tries playing drums on the trashcan, at which point he gives up and just throws the drum machine in the trashcan. With such sparkling, engaging personalities, these Swedish pop stars really don't have anything to worry about.