Accessibility links
New U.S. Commander In Afghanistan To Be Tested Lt. Gen. Stanley McChrystal, selected to lead U.S. and NATO forces in Afghanistan, has deep experience in secretive special operations. But his new job will require diplomacy in dealing with coalition partners and the Afghan government. McChrystal faces confirmation hearings in the Senate on June 2. 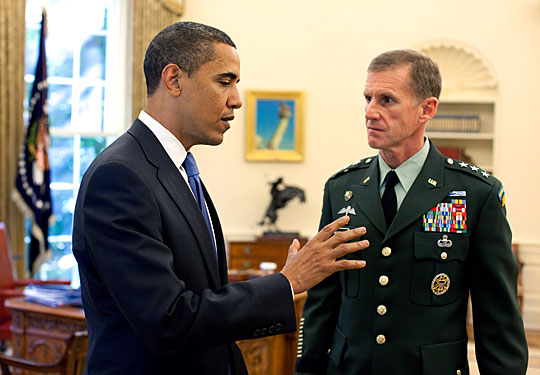 President Obama meets with Lt. Gen. Stanley McChrystal, the new U.S. commander for Afghanistan, on May 19 in the Oval Office.

The man selected to take charge of the war in Afghanistan, Lt. Gen. Stanley McChrystal, 54, is an Army Ranger and the former leader of a secretive counterterrorism force. He now faces the challenge of moving from the clandestine world of military black operations to the very public role running U.S. and NATO war efforts.

To succeed in his new job, this career warrior must draw on his diplomatic skills.

"If there's anybody out there that thinks that this is the same job that he's done in the past, I would tell you that they're wrong," says retired Army Gen. Bryan "Doug" Brown. He was McChrystal's boss when Brown was overall commander of U.S. special operations from 2003 to '07.

But McChrystal, a 1976 West Point graduate, hasn't always worked in the shadows. He currently is director of the Joint Staff, a prominent Pentagon job. In 2003, he was one of the military's top spokesmen, briefing reporters on the war in Iraq.

"I think he's the finest that we've got on the books, to be honest with you," says former Army chief of staff Peter Schoomaker, a retired four-star general.

Leading The Hunt For Bin Laden, Others

After the Sept. 11 attacks in 2001, McChrystal led teams hunting for Osama bin Laden and his deputies, and for the notorious leader of al-Qaida in Iraq, Abu Musab al-Zarqawi.

"The job he's taking over right now is going to place a much greater emphasis on White SOF — on doing counterterrorism and counterinsurgency operations using indigenous forces. That doesn't in any way disqualify Stan McChrystal. But I think it's going be an adjustment in his approach to the fight," Grenier says.

McChrystal, named earlier this week by Defense Secretary Robert Gates to replace Gen. David McKiernan, will have the chance to lay out his approach next week. The Senate Armed Services Committee plans a confirmation hearing for McChrystal on June 2.

The same committee held up his confirmation a year ago when he was up for a promotion.

Senators raised concerns over allegations of abuse at detention facilities in Iraq and Afghanistan. A spokesman for the Special Operations Command confirmed to NPR that 68 people assigned or attached to Special Operations units were disciplined for detainee abuse during McChrystal's tenure.

But it is unclear how many of these fell under his direct command, and McChrystal has never been sanctioned.

Senators also raised questions about the death of Pat Tillman, the former NFL star who gave up a lucrative pro football career to join the Army Rangers and fight in Afghanistan after the Sept. 11 attacks.

Tillman, a corporal, was accidentally killed by fellow Army Rangers. The Army initially insisted that Tillman died from enemy fire.

A Defense Department report held McChrystal accountable for "inaccurate and misleading assertions" about the episode. But McChrystal was eventually cleared.

Sen. Jack Reed, a Rhode Island Democrat who sits on the Armed Services Committee, expects that questions about Tillman will surface next week. But Reed predicts that the issue won't hurt McChrystal's chances.

"I think he has demonstrated that in retrospect his judgment has improved. I think he's done a lot of things that earned him confirmation before and will do it again," he says.

Reed says he has a sense that McChrystal wishes he had handled that situation differently. "My sense is yes. But again, given the situation, I think there are a lot of folks look back and say, 'Gee, I wish I had done that differently.' "

Congressional aides say both Tillman's death and questions of detainee abuse were vetted last year. Unless new information surfaces, they say, McChrystal is on track to be awarded a fourth star and his new command in Afghanistan.