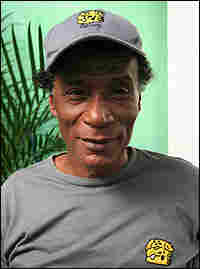 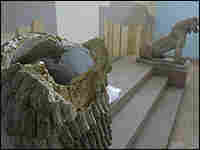 The broken head of an Assyrian-era lion, damaged during the looting of Iraq's national museum in Baghdad. Cris Bouroncle/AFP/Getty Images hide caption

U.S. federal agents report that the looting of the world's archaeological sites is epidemic. One archaeologist working in Guatemala has launched a battle to save an ancient city from the ravages of looters.

The rules have changed for museums, dealers, collectors and auction houses. Looted relics have become as contentious as they are beautiful. In Part Two of this report, we examine the tomb robbers' global marketplace.

They say the world's second oldest profession is tomb raiding.

In the jungles of northern Guatemala — where the lowland Maya created stunning jewelry, ceramics and reliefs — there was no one better than Ramon Peralta. He was a huechero — a tomb looter.

"If an archaeologist leaves a site, the looters are going to come because he knows it's an interesting site. 'Oh, that's where the gringos went! Man, it has to be an important site. There has to be something there,'" Peralta says.

Like a computer hacker who goes to work for Microsoft, Peralta quit looting five years ago and now serves as a guide for the Wildlife Conservation Society in the vast Peten Province.

He slouches in a chair with a wry smile creasing his copper-colored face.

"This is never gonna end, never gonna end. Forget it. Peten is huge and anywhere you go in Peten, you'll find monticulos and ruins and other sites, and it's just always going to continue," Peralta says.

The reason it will continue — not just in Guatemala, but in China, Afghanistan, Cambodia, Nigeria and Mali, to name just a few countries — is because of the demand, says Richard Leventhal, an archaeologist at the University of Pennsylvania and a leading voice in the movement to curtail the trade in looted antiquities.

"I think the connection must be made that the people are looting to look for spectacular objects because there is an art market that will gobble them up and sell them around the world to private dealers and to museums," Leventhal says.

The modern world has made the sacking of archaeological sites even easier — with containerized shipping, overnight mail, Internet auctions and email.

War and civil conflict leave ancient sites and museums unprotected. In the most vivid example, 14,000 pieces were ransacked from the Iraq Museum. Matthew Bogdanos, a reserve Marine colonel who helped investigate and recover some of the relics, says he was astounded by the global black market he discovered.

"That includes the smugglers on the first leg of the journey outside the country, be it Jordan, Egypt or Iraq. That also includes the individuals who provide the false documentation — the provenance — that gets it on its way to a dealer in Beirut, Geneva or Dubai. That includes the dealers. And that ultimately includes the end-user, the collector — individuals whose names you would recognize from society pages," Bogdanos says.

The looting of the Iraq Museum helped draw attention to the scope of the illegal trade in antiquities. The FBI responded by creating a rapid deployment Art Crime Team. U.S. Customs and Border Protection has begun training its inspectors, though a senior agent guesses they only catch 5 percent of what's smuggled into the country. What's more, the federal government has signed bilateral agreements with 11 countries that allow it to seize and repatriate stolen antiquities at the border.

But the most effective measure has been targeting the marketplace, says Roger Atwood, a journalist who wrote a book on the subject titled Stealing History.

The buyers — auction houses, dealers, collectors and museums — have been feeling the pressure particularly from Italy.

In recent years, the Metropolitan Museum of Art in New York and the J. Paul Getty Museum of Art in Los Angeles agreed to return artworks believed stolen from Italian soil. And in the most watched case, prominent art dealer Robert Hecht Jr. and former Getty museum curator Marian True are on trial in Italy for conspiracy to traffic in illegal antiquities.

"I think if the Italians are successful against Marion True, it'll have phenomenal impact on how the larger institutions conduct their business to move this out of the dark ages," said Jim McAndrew, the top art-crime cop with U.S. Immigration and Customs Enforcement.

Traditionally, museums have acquired cultural material because it is beautiful or important, with little regard for how it was obtained. Think of the Earl of Elgin hauling the Parthenon Marbles out of Athens in 1806.

"There were empires, there was war, there was booty taken. To the victor went the spoils, and the museums of the world still represent the dispositions of some of those historical events. We are now living in this different world, and we are requiring more provenance history, and if we think it was recently excavated, we're just not going to buy it," said Timothy Potts, director of the Kimbell Art Museum in Fort Worth.

The key word he uses is provenance — the history of an object's ownership.

Sotheby's, the largest auction house in the world, used to be notorious for buying unprovenanced antiquities, some of which were illegitimate. Punctuating the new chill in the art world, last year, Sotheby's hired as its worldwide director of compliance the former federal art-crime prosecutor in New York.

In this new climate, every relic has to have a paper trail or it's considered pillage — an assumption that some see as overreacting.

Torkom Demirjian, the Turkish-born owner of Ariadne Galleries, sits in the parlor of his elegant townhouse/gallery on the Upper East Side of New York. His left elbow rests casually on a fifth-century Byzantine pillar. He's tired of dealers and their customers getting blamed for somehow encouraging the destruction of archaeological sites.

"Americans who buy them, they don't buy these things to destroy or to cause harm. You love something, you protect it. So the issue is, is it good or bad for a work of art to come to America, as opposed to going elsewhere or going nowhere?"

The sad reality, Demirjian and other experts said, is that the crackdown on illegal antiquities in this country has had an unintended consequence. It has diverted the spoils of tomb raiding from the United States to markets in Europe and Japan, where enforcement is more lax.