Accessibility links
After 50 Years, Space Monkeys Not Forgotten In 1959, the United States finally succeeded in sending monkeys into space and bringing them home alive. Two years before any humans, Able and Baker were launched about 360 miles up and experienced about nine minutes of weightlessness. 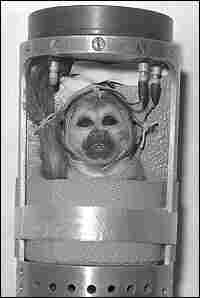 Miss Baker, a squirrel monkey, is tucked inside her capsule and ready to launch into space aboard a Jupiter missile. She traveled into space on May 28, 1959, along with Able, an American-born rhesus monkey. NASA hide caption

Miss Baker, a squirrel monkey, is tucked inside her capsule and ready to launch into space aboard a Jupiter missile. She traveled into space on May 28, 1959, along with Able, an American-born rhesus monkey. 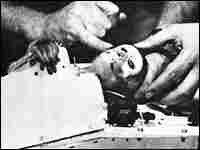 Able is extricated from the nose cone after it was recovered from the ocean. NASA hide caption 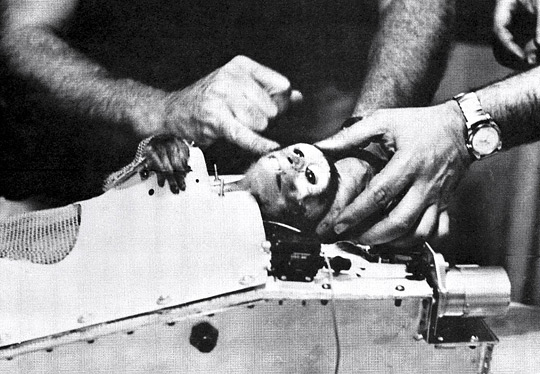 Able is extricated from the nose cone after it was recovered from the ocean.

In Huntsville, Ala., there is an unusual grave site where, instead of flowers, people sometimes leave bananas.

Fifty years ago, when Baker made her famous flight, she had some company in the nose cone of the Jupiter ballistic missile: a rhesus monkey named Able.

Able and Baker were shot about 360 miles up into space and experienced about nine minutes of weightlessness. Their safe return occurred two years before any humans flew into space, and it made them huge celebrities.

The monkeys appeared on the cover of Life magazine, and at a press conference, news correspondents "pushed each other and clambered over chairs to get closer," reported The New York Times.

Meanwhile, the newspaper noted, "the monkeys were far less excited than the humans. They munched peanuts and crackers."

Able and Baker were not the first living creatures to return to Earth alive from space, although that myth seems to be out there, says Chris Dubbs, co-author of the book Animals in Space: From Research Rockets to the Space Shuttle.

In 1947, the United States sent up fruit flies, which were the first living things to travel into space, Dubbs says. "And then they started sending monkeys."

America's first attempt to send up a monkey was in 1948. For over a decade, all monkey flights failed for one reason or another, Dubbs says.

In one case, the rocket exploded. Another monkey died on impact when its parachute failed. After another parachute failure, a monkey plummeted into the sea and was never recovered. One monkey mission saw the animals return home safely, but their vehicle hadn't traveled high enough for them to actually reach space.

Meanwhile, the Soviets were sending up dogs and having success bringing them back alive from suborbital flights, Dubbs says. At least 30 of those animals returned alive.

The first animal who actually orbited the planet was a dog named Laika, though she did not survive the entire flight. She was launched in 1957 in Sputnik 2.

"Americans were aware of this," Dubbs says, "and the space race was clearly on by the time that Able and Baker came on the scene."

Able was a rhesus monkey, and Baker was a much smaller squirrel monkey.

Because the rhesus monkey is revered by some in India, U.S. officials stressed that Able had been born not in India, but in Independence, Kan.

The monkeys' missile blasted off in the early morning hours from Cape Canaveral and traveled 1,700 miles in 16 minutes, reaching an altitude of about 360 miles.

The bright missile lit up the dark sky, says Joseph Guion, who commanded the Navy vessel USS Kiowa that retrieved the monkeys.

"You could read a newspaper on the bridge of the ship, it was so bright," he says. "The nose cone arced down, almost like a shooting star, down toward the water. It just came down very rapidly and — boom — it was gone."

He and his crew at first thought it had sunk. But then a lookout spotted the nose cone bobbing in the water, and they struggled to get it on board.

Military personnel on the ship checked on the monkeys and then sent out a message: "Able Baker perfect. No injuries or other difficulties."

Guion says he was floored to see how tiny Baker's capsule was.

"It was about the size of a large thermos bottle," he says, recalling that Baker was "extremely easy to talk to and hold. She was like a little doll. Able was just the opposite. You could not get near her."

The two monkeys were taken to the officer's wardroom, where air conditioning had been installed for their comfort. Later, they were flown to Washington, D.C., under military escort, for the press conference.

A Hundred Letters A Day

Unfortunately, Able died just a few days later, during a medical procedure to remove an electrode. Her stuffed body is on display at the Smithsonian's National Air and Space Museum.

But Baker lived another 25 years, mostly at the U.S. Space and Rocket Center in Huntsville, Ala.

"She would get 100 to 150 letters a day from schoolchildren," says Ed Buckbee, a former director of the center. Children read about her in textbooks and wanted to say hello. "She was very prominent in the story of our early spaceflight ventures."

The pioneering monkeys weren't forgotten, even after the first humans reached space in 1961.

More than 300 people attended Baker's funeral service when she died of kidney failure in 1984, Buckbee says.

And, he says, often at her grave at the entrance to the rocket center, "you'll see a banana or two laying there. You know, some youngster brought it or somebody heard the story and wanted to leave something in memory, kind of like leaving flowers over a person's grave."

Watch monkeys Able and Baker get prepped for takeoff and launched into space.