Accessibility links
The Journeyman Golfer Who Took On Tiger When Rocco Mediate, a low-ranking journeyman golfer, challenged Tiger Woods to a sudden-death playoff at the 2008 U.S. Open, it became the subject of the new book Are You Kidding Me? 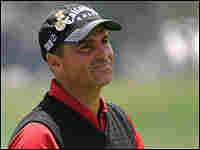 Rocco Mediate pulled off one of golf's most dramatic battles in 2008 against Tiger Woods. He is the subject of the new book AreYou Kidding Me? Robyn Beck/AFP/Getty hide caption 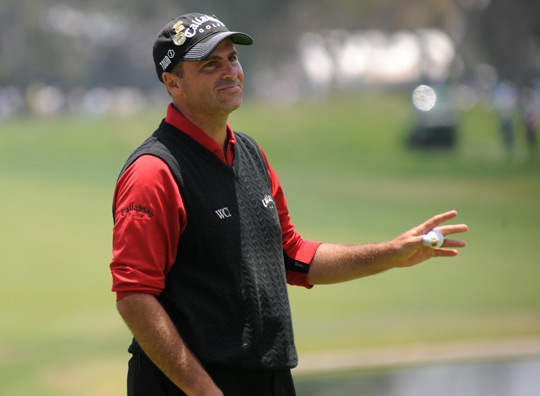 Rocco Mediate pulled off one of golf's most dramatic battles in 2008 against Tiger Woods. He is the subject of the new book AreYou Kidding Me?

Excerpt: 'Are You Kidding me?' 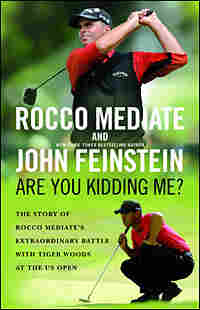 Are You Kidding Me?
By Rocco Mediate and John Feinstein
Hardcover, 336 pages
Little, Brown and Company
List Price: $26.99

Rocco Mediate was actually getting a little bit tired of the dream. He'd had it in different forms for as long as he could remember. Sometimes the dream happened when he was wide awake, practicing. Like almost any kid who ever played the game of golf, he would be locked in a duel with someone - usually his hero Tom Watson - for the United States Open title.

More recently, the dream had occurred when he was asleep. It was always a little bit foggy - the circumstances changed but weren't ever completely clear - but he was always about to win the U.S. Open. "I love all the majors," he frequently told friends. "But there's nothing like the Open. It's just the one for me."

Now it seemed he was having the dream again, only it felt completely real. What was eerie was the detail and the specifics of this dream. He was pacing up and down in the scoring area inside the clubhouse at Torrey Pines Country Club, the municipal golf course outside San Diego where the 2008 U.S. Open was being played. On a television monitor in front of him, Tiger Woods - it had to be Tiger, right? If you were going to dream about beating someone to win a U.S. Open, why would you dream about anyone else? - was on the 18th green, lining up a 12- foot birdie putt. If he made it, there would be an 18- hole playoff the next day: Tiger Woods, the greatest player in history, against Rocco Mediate, the greatest player to ever grow up in Greensburg, Pennsylvania; Tiger Woods, the number one player in the world, against Rocco Mediate, the number 158 player in the world.

Rocco wondered when he would wake up. He wasn't completely certain he was capable of even dreaming this scenario. He was aware of the fact that there was a TV camera on him, watching his every move and reaction as Woods circled the green, lining up the putt from every possible angle.

"He's going to make it," Rocco thought. "He has to make it, right? He's Tiger Woods. He always makes these putts." Then again, he knew how bumpy the 18th green was. After four dry days in San Diego, all the greens at Torrey Pines were bumpy, and he knew that Woods could hit a perfect putt and it might catch one of those bumps and bounce away from the hole. "He's going to do everything right, I know that," he thought. "He's going to get the right line and the right speed. His hands aren't going to shake. The moment isn't going to get to him, because he's been in this moment like a zillion times in his life. He's not going to choke; he's not going to get so nervous that he hits a bad putt. In fact, he's going to hit a perfect putt.

"But it still might not go in. He's going to do everything he has to do to get the putt to go in, but there are some things - like a bad bounce - that are even out of his control. He could, through no fault of his own, miss.

Throughout history, there have been unlikely U.S. Open champions. Because the Open is truly an open, almost anyone who can play the game at an elite level can qualify. In 2008 a total of 8,390 players had entered the Open, most of them forced to go through two stages of qualifying to make the 156- man field that teed it up in June at Torrey Pines. Those who entered included players from the PGA Tour, members of the various major- and minor-league and mini- tours around the world, and club pros and amateurs. If you had the $100 entry fee and a handicap of 1.4 or lower, you could sign up to play.

Of course the Open is won most often by the game's most glamorous names. Woods had won it twice, Jack Nicklaus and Byron Nelson four times. Ben Hogan, Arnold Palmer, Gary Player, and Tom Watson were all Open champions. But Sam Snead had never won it. Neither had Nick Faldo, Steve Ballesteros, Phil Mickelson, or Vijay Singh.

But surprises happen. Jack Fleck, a club pro, beat Hogan in a playoff at the Olympic Club in 1955. Andy North, who had won only one other tournament in his entire career, won the Open twice - in 1978 and again in 1985. Steve Jones came through qualifying to win in 1996, and Michael Campbell did the same thing before beating Woods by a stroke at Pinehurst in 2005.

But no Open precedent could have prepared fans for Rocco Anthony Mediate. He had also been forced to qualify, playing 36 grueling holes in Columbus, Ohio, ten days before the Open was to begin. He had birdied his second- to- last hole of the day to get into an eleven-man playoff for the final seven spots. Then he birdied the first playoff hole to make the field.

But that was only part of the story. He was forty-five and had thought his career over because of back miseries on more occasions than he cared to think about. He had undergone major back surgery once and been forced to leave the tour for extended periods several times.

As recently as July of 2007, he had gotten out of his car on a Sunday afternoon at Los Angeles Country Club, planning to play a round of golf with friends, taken one step in the direction of his trunk, and fallen fl at on his face, his back completely seizing up. In a scene out of a movie, he had managed to reach into his pocket for his cell phone and, remembering that using cell phones was against the rules in the parking lot, sent a text message to his friends inside the clubhouse. "In parking lot face down. Help."

He was a long way from that parking lot now, two weeks after qualifying, and he wondered when he would wake up, thinking how nice it would have been to find out if Woods made the putt. It would have been fun - even for an instant - to be the U.S. Open champion, even if it was just another dream.

Only he didn't wake up. He was still sitting there, watching the TV monitor while the TV camera watched him, as Woods finally got over the putt. How long had it been since he had finished his own round? Twenty minutes? An hour? Ten hours? At the very least it felt like an eternity.