Accessibility links
In Calif., Gay Marriage Fight Moves To Next Round The California Supreme Court's ruling upholding the voter-approved ban on marriage is not the final word. A lawsuit filed Wednesday seeks to challenge Proposition 8 in federal court. Still others are trying to take another crack at the ballot box.

Listen
In Calif., Gay Marriage Fight Moves To Next Round 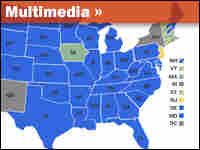 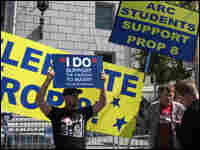 Hundreds of supporters and opponents of same-sex marriage outside the California Supreme Court in San Francisco on Tuesday. Thao Nguyen/KQED hide caption 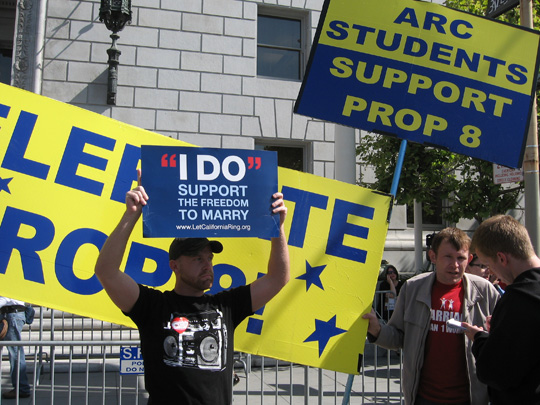 Hundreds of supporters and opponents of same-sex marriage outside the California Supreme Court in San Francisco on Tuesday. 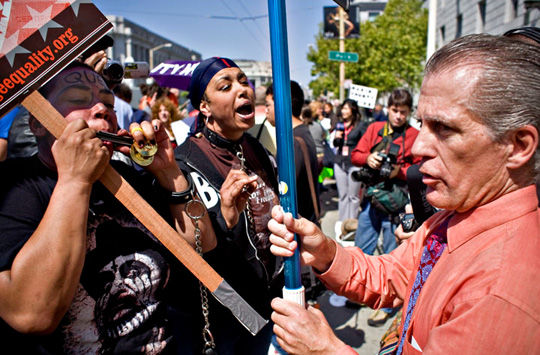 Gay marriage supporters and opponents face off in San Francisco.

Want to see more images from the courthouse on Tuesday? Click to see a slideshow produced by KQED.

It's clear that Tuesday's California Supreme Court decision upholding Proposition 8 will not be the final word on gay marriage in that state. A lawsuit filed Wednesday morning in Los Angeles seeks to challenge Proposition 8 in federal court.

And as evidence that politics makes strange bedfellows, the two lawyers who had been on opposite sides in the 2000 Bush versus Gore election challenge are the ones who filed the lawsuit. They argue that California's Proposition 8 violates the U.S. Constitution's guarantee of equal protection and due process.

Some gay rights groups disagree, and they issued a statement saying they'd rather have state legislatures and voters decide the issue.

Equality California — a leading gay rights group — said it wanted another crack at the ballot box.

Berkeley resident Lillia Tam supported that idea. Tam was among several hundred people standing in front of the courthouse in San Francisco on Tuesday morning in response to the 6-1 ruling.

"It's the only legal recourse we have — just a question of when," Tam says.

Many in the gay community were unhappy with Equality California's leadership of last year's $43 million campaign to defeat Proposition 8.

Critics, like community activist Andrea Shorter, say the campaign lacked grassroots support and failed to include any gay or lesbian people in its advertising.

"This time out we want to be sure that people are able to see and hear the voices of families...that are caring for each other," Shorter says.

Earlier this month, Equality California released TV ads featuring the kinds of voices critics like Shorter said were absent from last year's "No on 8" campaign.

Proponents of gay marriage are hiring field organizers, building bridges in places like the Central Valley and the Inland Empire where gay marriage has little support.

But opponents of gay marriage are ready to defend Tuesday's court victory. At a press conference Tuesday in Sacramento, Ron Prentice, chairman of Protect Marriage — the official proponents of Proposition 8 — expressed doubt that gay marriage rights can be won at the ballot box.

"In 30 states where this issue has been taken before the people, it's been unanimous. The people continue to believe that traditional marriage should stand in definition in law," Prentice says.

His side isn't resting on its laurels. Like the gay marriage advocates, they're also hiring field organizers, conducting focus groups and raising money.

Political consultant Frank Shubert — who ran the "Yes on 8" campaign — says his group, Protect Marriage, will be ready for any future ballot measure.

"And to get ready for that we're going to keep relationships we've developed with churches, people of faith, ethnic communities in California," Shubert says.

Not all opponents of same-sex marriage are eager for the next battle. The Rev. Rick Cole is senior pastor of the Capital Christian Center in Sacramento and a supporter of Proposition 8.

But Cole worries that another campaign will lead only to more anger on both sides.

Support for gay marriage has been consistently rising in California over the past 30 years. Younger voters in particular favor expanding marriage rights, and as more of them reach voting age, it's likely to tip the scale toward marriage equality.

Still, the latest polls show Californians are still split right down the middle on this issue, so next year's gay marriage campaign is likely to be another nail-biter.