Accessibility links
Old-School Sitcoms Find Fans Among A Younger Set The days when networks programmed multiple nights of old-school, multi-camera sitcoms are long gone. But the golden age of the sitcom lives on — if you turn on Nickelodeon or The Disney Channel. 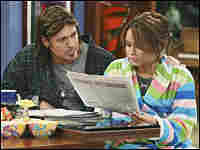 Making Memories: Will Disney's Hannah Montana (with Miley and Billy Ray Cyrus) be the stuff of dorm-room bonding one day? The sitcom's writers hope so. Dean Hendler/Disney Channel hide caption 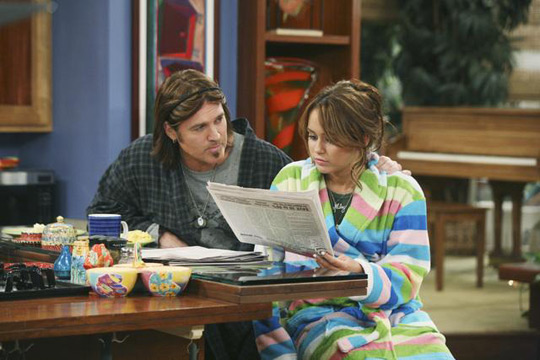 Making Memories: Will Disney's Hannah Montana (with Miley and Billy Ray Cyrus) be the stuff of dorm-room bonding one day? The sitcom's writers hope so. 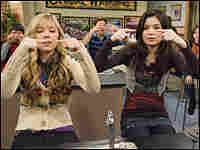 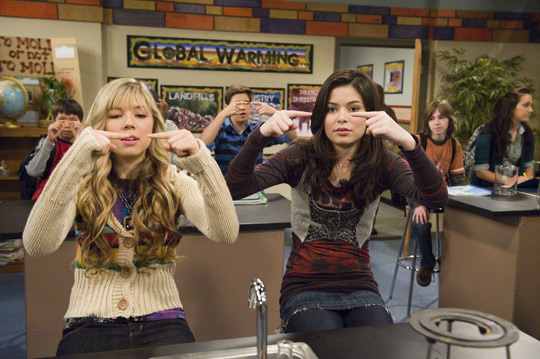 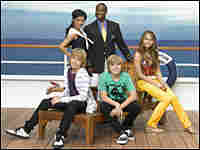 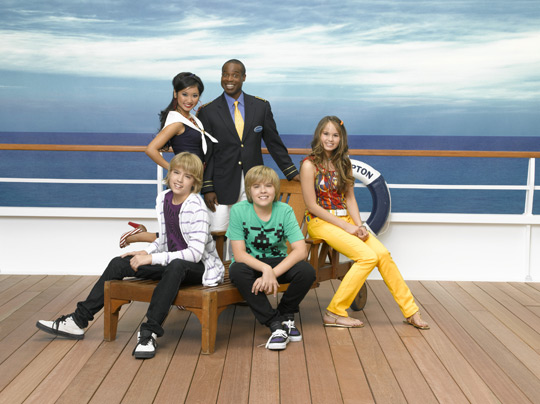 The days when each of the broadcast networks programmed multiple nights of old-school multi-camera sitcoms are long gone.

But we're still living in the golden age of the sitcom — if you turn on Nickelodeon or its mortal enemy, The Disney Channel. That's what plenty of kids do when they want to watch Drake and Josh, the Jonas Brothers, Zoey 101, Hannah Montana or iCarly.

"With people all the way from 17 to 2 ... iCarly often is the No. 1 show, not just on cable but all of television," says Nickelodeon's Dan Schneider.

Over at The Disney Channel, programming executive Adam Bonnett says he knows why sitcoms for kids are so popular at a time when adults don't seem as interested in laugh tracks.

The success of Seinfeld and Friends in the 1990s bred too many pale imitations. Adults burned out on schlubby husbands with improbably hot wives and wacky neighbors.

"There was a generation of adults that just saw a lot of bad sitcoms," Bonnett explains. "The beauty of kids is they weren't part of that audience, so they come in with open eyes and embrace the format."

The Disney Channel has embraced the format with outrageous success. Shows like Hannah Montana and The Suite Life of Zack and Cody have helped build the network — and have fueled the Disney juggernaut by launching its current generation of movie and pop stars, such as Miley Cyrus and The Jonas Brothers.

"I don't think of myself as a guy who writes for kids, I really don't," says Nickelodeon's Dan Schneider. "I try really hard to write a good, solid sitcom."

The writing staffs of 'tween sitcoms are often stacked with veterans from the heyday of the network sitcom — people who wrote for Roseanne, The Facts of Life and The Jeffersons.

Schneider himself has been in sitcoms most of his life. He started out as an actor on one, years ago. He played one of the nerds of the '80s high school show Head of the Class.

He says the people at Nickelodeon go out each time trying to write something that can stand alongside a Taxi or Bewitched, even if his audience has no idea what those shows are.

"Kids today don't know the classics," he laments. "They don't even know The Brady Bunch anymore." Still, he says, that doesn't give writers license to slip an old Laverne and Shirley bit into a script just because the kids won't know any better.

Disney's Bonnett and Nickelodeon's Schneider agree that there's a lot of satisfaction in making sitcoms for kids. They loved classics like Taxi, Cheers and Diff'rent Strokes. In fact they still love those shows — and they hope their shows will have a long life for their audience now in their 'tweens.

"I can enjoy watching an episode of The Brady Bunch even though I'm a 41-year-old man," Bonnett admits. "I hope adults will look back fondly at episodes of Hannah Montana because those shows meant so much to them growing up."

Schneider says he's happy to be in the only corner of the TV business where he can still have the kind of impact classic network sitcoms once had.

In past decades, everyone could stand around a water cooler talking about last night's M*A*S*H finale. Now, he says, it's good to know that someday his audience will be crowding around a keg in college, reminiscing about that one iCarly episode that made them laugh so hard.

The audio version of this story incorrectly identifies a Disney Channel programming executive as Andy Bonnet. His name is Adam Bonnett; the text on this page has been updated.