Accessibility links
Company's 'ATM For Books' Prints On Demand Have you ever had that frustration of walking into a bookstore, looking for a specific book, and being told it's out of print or not in stock? A New York company wants to put an end to that. On Demand Books has installed a trial machine in a London bookstore that prints out books on request. 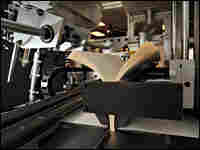 A test book is produced on the Espresso machine at Blackwell's bookstore in central London in April. Leon Neal/AFP/Getty Images hide caption 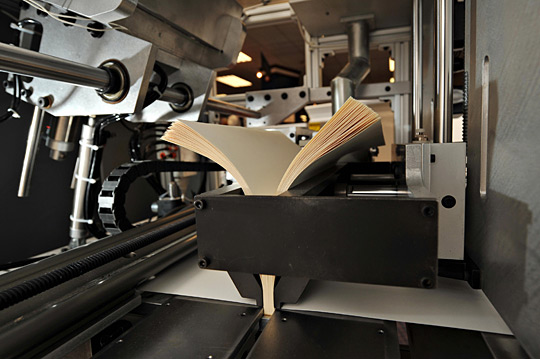 A test book is produced on the Espresso machine at Blackwell's bookstore in central London in April.

Have you ever had that frustration of walking into a bookstore, looking for a specific book, and being told it's out of print or not in stock?

One company wants to put an end to that. In a move some are calling the most significant step in publishing in the past 500 years, a New York company is trying to make books available on demand, printed out locally, rather than centrally as they always have been.

On Demand Books has installed a trial machine in a central London bookstore. It's called the Espresso machine, but it has nothing to do with coffee beans. This baby's grinding out books.

"Effectively, it's a great big office printer stuck to a rather lovely, in my opinion, but perhaps not the most aesthetically pleasing collection of technology," says Marcus Gipps, floor manager of Blackwell's bookstore on London's Charing Cross Road, perhaps the bookiest corner of one of the world's bookiest cities.

Staying Ahead Of The Competition

The printer runs at about 100 pages a minute, Gipps says. The machine then sticks and binds the pages together itself, and out comes a book — a real book, just like all the other books on Blackwell's shelves.

Gipps says the store already has a half-million titles saved digitally on the Espresso, ready to print — that's five times the number on the shop floor — and within three months, it should have more than a million available.

He says it's changing the whole way people will look at purchasing books.

"I just typed in my surname and I looked for a few things, and I found a book by my great-granduncle, which he wrote in 1901 and was published in Shanghai. I printed that off for my dad — it made his day," he says. "We've been printing off stuff like Darwin's early work. I mean, nobody really wants Darwin's work on earthworms. There is a small market for it on the secondhand market, where it goes for about 500, 600 pounds normally, even in a tatty condition. We printed one off for a customer and he walked out with it and it was 10 pounds."

At $15, that's a bargain. And what that means is that in the future, if other smaller bookstores get one of these machines — not cheap, to be sure, at about $175,000 — they will be able to compete much better with bigger stores, with Internet stores and also with the rise in electronic books.

The company that makes the Espresso calls it "an ATM for books." On Demand Books CEO Dane Neller says it's the biggest revolution in publishing since Gutenberg started printing more than 500 years ago. He says it will help keep paper books way ahead of electronic books, such as those available on the Amazon Kindle.

Back at Blackwell's in London, there's another type of author who is helped by the Espresso machine — in addition to the out-of-print authors and the academic authors.

Jennifer Brown says she popped out on her lunch hour "because I finished my first book about a month ago and I really wanted to get it published, so this seemed a perfect opportunity."

Brown says she handed over her pen drive with a PDF file on it, and within about 10 minutes, she had her own book.

Brown holds a copy of her newly printed first novel, Abstractions of Feeling — fulfilling her childhood dream. Now, she's trying to find an agent and a publisher. Brown says she loves the Espresso machine.

"Makes me feel like a real author," she says. "Really feels that all that hard work is worthwhile. And now, even if I don't get a publisher, I have something to give to my friends to show them that I've done something, I've achieved something."

On Demand Books says it has five machines already available to the public in the United States. It plans 25 around the world by the end of the year and hopes to have several thousand worldwide within five years.

In some broadcasts, we said that Darwin's study of earthworms was "one of his first" books. In fact, it was his last scientific book.