Excerpt: 'Food Of A Younger Land'

Excerpt: 'Food Of A Younger Land' 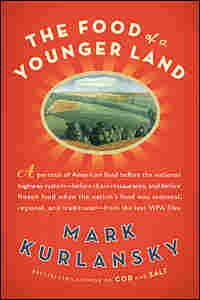 The Food of a Younger Land: A Portrait of American Food—Before the National Highway System, Before Chain Restaurants, and Before Frozen Food, When the Nation's Food Was Seasonal, Regional, and Traditional—from the Lost WPA Files
By Mark Kurlansky
Hardcover, 416 pages
Riverhead
List Price: $27.95

When someone says to me, "I went to Chicago last week" or "I went down to Virginia this summer," a question always comes into my mind, though I often resist asking it: "What did you eat? Anything interesting?"

I would like to know what politicians eat on the campaign trail, what Picasso ate in his pink period, what Walt Whitman ate while writing the verse that defined America, what mid-westerners bring to potlucks, what is served at company banquets, what is in a Sunday dinner these days, and what workers bring for lunch. What people eat is not well documented. Food writers prefer to focus on fashionable, expensive restaurants whose creative dishes reflect little of what most people are eating. We know everything about Paris restaurants but nothing about what Parisians eat. We know little about what Americans eat and less about what they ate.

A few years ago, while putting together Choice Cuts, an anthology of food writing, I discovered to my amazement that government bureaucrats in Washington in the late 1930s were having similar thoughts. But these were not typical bureaucrats because they worked for an agency that was unique in American history, the Works Progress Administration, or WPA. The WPA was charged with finding work for millions of unemployed Americans. It sought work in every imaginable field. For unemployed writers the WPA created the Federal Writers' Project, which was charged with conceiving books, assigning them to huge, unwieldy teams of out-of-work and want- to-be writers around the country, and editing and publishing them.

After producing hundreds of guidebooks on America in a few hurried years, a series that met with greater success than anyone had imagined possible for such a government project, the Federal Writers' Project administrators were faced with the daunting challenge of coming up with projects to follow their first achievements. Katherine Kellock, the writer-turned-administrator who first conceived the idea for the guidebooks, came up with the thought of a book about the varied food and eating traditions throughout America, an examination of what and how Americans ate.

She wanted the book to be enriched with local food disagreements, and it included New England arguments about the correct way to make clam chowder, southern debate on the right way to make a mint julep, and an absolute tirade against mashed potatoes from Oregon. It captured now nearly forgotten food traditions such as the southern New England May breakfast, foot washings in Alabama, Coca- Cola parties in Georgia, the chitterling strut in North Carolina, cooking for the threshers in Nebraska, a Choctaw funeral, and a Puget Sound Indian salmon feast. It also had old traditional recipes such as Rhode Island jonny cakes, New York City oyster stew, Georgia possum and taters, Kentucky wilted lettuce, Virginia Brunswick stew, Louisiana tête de veau, Florida conch, Minnesota lute?sk, Indiana persimmon pudding, Utah salmi of wild duck, and Arizona menudo. Ethnic food was covered, including black, Jewish, Italian, Bohemian, Basque, Chicano, Sioux, Chippewa, and Choctaw. Local oddities, such as the Automat in New York, squirrel Mulligan in Arkansas, Nebraska lamb fries or Oklahoma prairie oysters, and ten-pound Puget Sound clams, were featured. Social issues were remembered, as in the Maine chowder with only potatoes, the Washington State school lunch program, and the western Depression cake. There was also humor to such pieces, as the description of literary teas in New York, the poem "Nebraskans Eat the Weiners," and the essay on trendy food in Los Angeles.

If I search my childhood memories, having been born in the late 1940s, I can recall some of the lingering vestiges of the America that is described in America Eats. It was an America without fast food. Even in restaurants and at roadside stands, the prevailing style was what might be called "home cooking." Home cooking was a mixed blessing, as it is in many homes, better than the industrialized fare along today's expressways but not as good as many of today's restaurants. The interstate highway system had not yet been built, and Americans traveled through farm country and down the main streets of towns on two-lane roads in dark-colored cars with standard transmissions, split windshields, and simple dashboards with radios that worked on occasion and clocks that never kept time.

Most people had refrigerators that older people referred to as Frigidaires, after the brand, the way some of us today still call photocopies Xeroxes. Some people still had iceboxes, but ice deliveries were becoming scarce. Frozen food was sold, but the tiny little freezers in the new modern refrigerators frosted up, did not maintain low temperatures, and, in any event, had little space. A freezer cold enough to keep food safely for long periods or to keep ice cream hard was rare. It was still best to go to the soda fountain for ice cream, and you always got a seltzer on the side.

America had few suburbs and a lot of farms and farming families, and most of the coastal towns had commercial fishing boats. Food was seasonal, and an early melon from Texas or a winter carrot from California was a noted event. I can still remember when my great-uncle Max shipped us a crate of individually wrapped grapefruits from Florida.

Food was far more regional than it is today. Being raised in New England and New York, I was struck by the differences in how people ate in other parts of the country-how breakfasts got bigger as you traveled west and hamburgers became increasingly adorned until by California they were virtually a salad sandwich. In New England you ate corn relish or cottage cheese, each served in little metal cups before the meal in the better restaurants, where popovers were often dispensed from a deep tin box, big enough to be an oven and strapped to the server's shoulders. You had to find a Jewish bakery to get a respectable rye bread. Crusty bread came from Italian bakeries. Italian food was served in tomato sauce, and though macaroni and spaghetti came in many shapes and sizes, no one called it "pasta" even though the dish before it was frequently called "antipasto." My parents liked Italian neighborhoods because there and nowhere else you could get an espresso, known as a demitasse.

As you left the Northeast you said good-bye to almost all traces of Jewish food, including bagels, until you reached California. I remember being struck by the fried food and the powdered sugar in the South. In Seattle we ate aplets and cotlets, the little apricot or apple sugar-dusted fruit bars of Washington state. In Albuquerque I thrilled to my first taste of Mexican food and in Pismo Beach, California, I got to eat for the first time wonderful crunchy sandwiches called tacos.

The only chain restaurants I recall were A&W Root Beer, with frothy root beer on tap, and Howard Johnson's, a New England company-my father claimed to have worked as a student for Howard himself in the ?rst store in Quincy, Massachusetts-and I liked their ice cream and their fried clams.

America was starting to build highways, sell farms to build suburbs, and industrialize the production of food. The ways of prewar America were rapidly vanishing. The war industries that brought America out of the Depression had changed the landscape. I grew up in a blue-collar community on the edge of Hartford where people worked in factories and crowded into neighborhood housing. It in no way resembled the description of it in the 1938 WPA Guide for Connecticut, the first of the guides after which the rest were modeled. The guide characterizes the crowded, fast- growing industrial area I knew as an "attractive verdant setting."

From 1940 to 1950 the population of the United States increased from 20 million to 151 million, and Americans became far more affluent. In that same decade the gross national product of the United States nearly tripled. The average yearly expenditures of an American also nearly tripled. But despite the growth in the economy, the value of exports in 1950 was only a third of what it had been in 1940. The country was changing from an export- based economy to a consumer-based one. By 1950, the military-industrial complex that Eisenhower would warn about in his 1961 farewell address had already firmly taken root. In 1950 government military spending was seven times as much as it had been in 1940.

There were twice as many cars on the roads. America was becoming a less family-centered society, which was having an enormous impact on the way Americans ate. In 1940 there were 264 divorces for every thousand people. By 1950 the divorce rate had risen to 385 per thousand.

But the most striking difference of all was that in 1940 America had rivers on both coasts teeming with salmon, abalone steak was a basic dish in San Francisco, the New England fisheries were booming with cod and halibut, maple trees covered the Northeast and syruping time was as certain as a calendar, and flying squirrels still leapt from conifer to hardwood in the uncut forests of Appalachia. All of this has changed. It is terrifying to see how much we have lost in only seventy years.

To see that prewar America was a very different country, one has only to contemplate the origin of America Eats. To anyone who knows and understands the United States, the fact that there was a Federal Writers' Project at all seems nothing short of miraculous. This is America, the land with no Ministry of Culture, where politicians alone are portrayed on the money. Almost unique among Western republics, the likeness of not one writer, philosopher, painter, or composer has ever graced the engraving of a U.S. bill or coin. The separation of church and state may be the great articulated legal principle, but another sacrosanct concept is the separation of state and culture. And yet there was an age when the U.S. government permanently employed painters, sculptors, playwrights, musicians, actors, and writers to produce art.

Reprinted from THE FOOD OF A YOUNGER LAND: A portrait of American food - before the national highway system, before chain restaurants, and before frozen food, when the nation's food was seasonal, regional, and traditional - from the lost WPA files edited by Mark Kurlansky by arrangement with Riverhead Books, a member of Penguin Group (USA), Inc., Copyright © 2009 by Mark Kurlansky 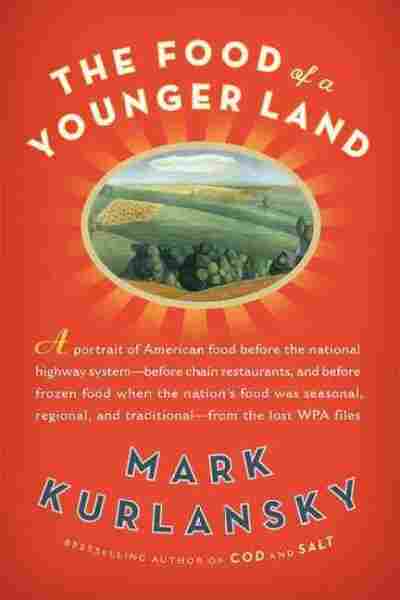 The Food of a Younger Land

A Portrait of American Food—Before the National Highway System, Before Chain Restaurants, and Before Frozen Food, when the Nation's Food was Seasonal, Regional, and Traditional—from the Lost WPA Files

Title
The Food of a Younger Land
Subtitle
A Portrait of American Food--Before the National Highway System, Before Chain Restaurants, and Before Frozen Food, when the Nation's Food was Seasonal, Regional, and Traditional--from the Lost WPA Files
Author
Mark Kurlansky