Accessibility links
Anti-Corruption Efforts In Russia Fall Short People in Russia pay an estimated $300 billion a year in bribes to street cops and government officials in a system rife with corruption. President Dmitri Medvedev says one of his top priorities is fighting corruption, but critics say he couldn't tackle the problem even if he wanted to. 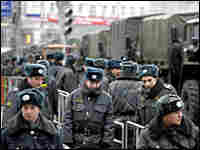 Russian police officers cordon off the area of an anti-Kremlin protest in Moscow in December. Mikhail Metzel/AP hide caption 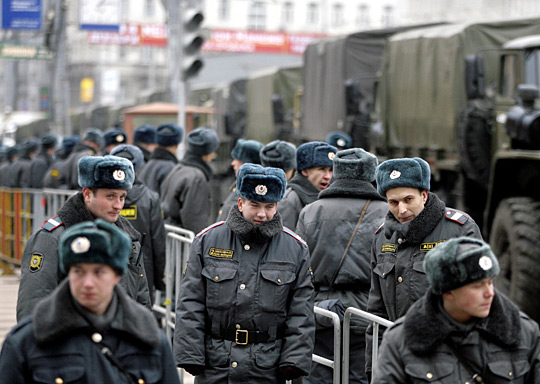 Russian police officers cordon off the area of an anti-Kremlin protest in Moscow in December. 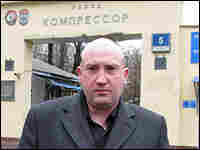 Moscow businessman Roman Pronyak says he was arrested after police fabricated a drug smuggling case against him. Jailed for a year and a half, he says, "It's clear nothing is being done to fight corruption." Gregory Feifer/NPR hide caption 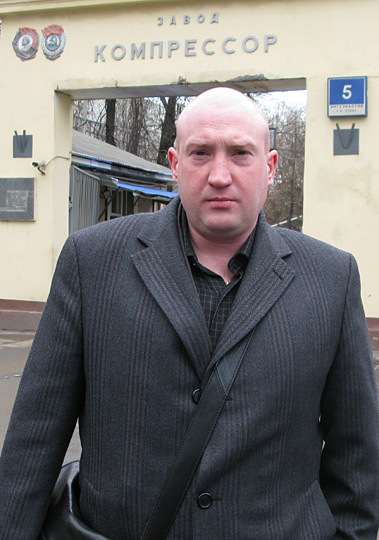 Moscow businessman Roman Pronyak says he was arrested after police fabricated a drug smuggling case against him. Jailed for a year and a half, he says, "It's clear nothing is being done to fight corruption."

Russian President Dmitri Medvedev has made fighting corruption one of his top priorities.

But critics say Medvedev's pledge is only for show. They say corruption is so rife among law enforcement and government officials that Medvedev couldn't tackle the problem even if he really wanted to.

From migrant workers forced to pay cops bribes to businesses paying to keep government inspectors from shutting them down, the government estimates people in Russia pay $300 billion in bribes each year.

On Moscow's main avenue, fancy clothes shops and restaurants give the city the look of any other major capital. But some say that under the surface, first under Vladimir Putin, and now under his protege and successor Medvedev, Russia has become a dangerous place for critics of the authorities, partly because society here views corruption as normal.

Moscow businessman Roman Pronyak knows the problem all too well.

Two years ago, police came for Pronyak, then a partner in a prospering baking company that rented a warehouse in an industrial complex surrounded by Soviet-era residential buildings, in northeast Moscow.

A small army of masked commandos brandishing Kalashnikov assault rifles surrounded him and dragged him off to a region south of Moscow. He was jailed for a year and a half.

"It was hell," says Pronyak. "The charges were absurd."

The middle-class businessman was accused of drug smuggling. Police said the poppy seeds his company sprinkled on dinner buns were really used to make heroin. Pronyak guesses he was targeted only because the police wanted to appear to be tackling crime.

It is a familiar story to many Russians, who say the police spend much of their time falsifying statistics to meet Soviet-era arrest quotas. Rather than investigating actual crimes, it is widely believed, police "solve" cases sometimes by framing innocent people.

Medvedev has promised a major campaign against corruption, which he recently said threatens not only Russia's small businesses, but the country's very stability. Earlier this year, Medvedev and other top officials declared their incomes and assets for the first time.

But critics say that like many other recent anti-corruption drives, these measures are only window dressing.

"There's no real mechanism to fight corruption because it would mean that those with the power to fight corruption would have to target themselves first," says Mikhail Trepashkin, a former officer of the Federal Security Service, the FSB, the successor to the Soviet-era KGB.

He says the Kremlin's own power is supported by corruption.

Trepashkin says he was fired from the FSB in 1995 after helping catch high-ranking special-forces officers selling weapons to Chechen rebels.

Trepashkin went on to become a lawyer who investigated a series of apartment building explosions in 1999. They served as a pretext for launching a second war in Chechnya that catapulted then-Prime Minister Putin into the presidency. Trepashkin says he was arrested on false charges of illegal possession of firearms to stop him from finding out who bombed the buildings.

"The regime Putin built was based on loyalty to him above the rule of law, and that's a clear sign of corruption, and why Putin and corruption will be remembered together in history," says Trepashkin, who spent four years in jail, partly in Siberia.

Corruption At All Levels Of Government

Roman Shleinov, an editor at the crusading newspaper Novaya Gazeta, says Russia lacks a civil society to hold officials accountable and has a state bureaucracy that has doubled in size in recent years.

"To get anything done — say, register a new company — you have to pay bribes. So people don't draw up official documents. Instead, they have become used to making agreements face to face. Russia is a country of informal ties — from the gypsy cabs on every street to the biggest companies that need the Kremlin's secret approval for their deals," Shleinov says.

Andrei, a former police detective who won't give his last name because he is afraid of reprisals, says the police will set up crimes they then appear to solve in order to make a profit.

"It's a business," Andrei says. "And it goes all the way to the top. The sums grow larger as they get passed up."

Andrei says most police couldn't live on their meager official salaries, let alone afford the rows of shiny luxury cars parked in front of many police buildings. He says those who don't agree to take part are fired or framed.

Russian officials say they are taking action against such abuses. But critics say no one in Russia is safe from abuse of power.

The businessman, Pronyak, says despite the lack of any evidence that he sold poppy seeds to make heroin, he is still facing trial. He says he is still in shock over time in jail.

"Every day, I kept thinking the cell door would open, that they'd realize it was all a mistake," he says. "Now I know the police are free to do whatever they want."