Accessibility links
Already Poor, Poets Don't Much Mind The Recession The poetry business is strangely immune to the economic downturn. That's because poetry never made any money to begin with. But people affected by the downturn are turning to poetry to express themselves. With no money at stake, readers of NPR's Planet Money blog took a Recession Haiku Challenge.

And now you can write a haiku about it.

This weekend, the world's book publishers will gather in New York for the 2009 BookExpo America. Organizers say this year the focus is on quality, not quantity. Large publishers have been hit hard by the recession, so they're trimming back the number of booths they'll staff at the expo.

But one corner of the publishing world has its own strange economy. Poets and those who publish them are used to earning next to nothing for their work. They call the cycle of rejections, teaching and issuing small books the "pobiz," short for "poetry business." And maybe the pobiz isn't so bad, if you look at it a certain way.

"I just gave a reading last week, and much to my surprise, I sold 15 copies," says Keith Taylor, a poet and teacher at the University of Michigan. "I thought I might sell two."

For editors like Bob Hershon, poetry is also a labor of love. His Hanging Loose Press advances poets the money they need to print and bind their volumes. Poets try to recoup that cost by doing readings and coaxing friends to buy their books. Hershon says his friends in commercial publishing are losing their jobs. "But we can't be out of work because we don't take any salaries," he says. "We're nuts, but my co-editors and I work out of our hip pockets."

Poets may not make a killing, but they do know a thing or two about living.

On NPR's Planet Money blog, the audience wrote their own "Recession Haiku." They expressed their thoughts and feelings about the economy in the classic verse form of three lines and 17 syllables, with a pattern of five, seven and five. 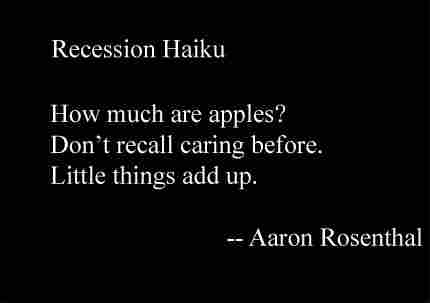 See a gallery of Recession Haiku at the Planet Money blog

Among the entries was this one, from Artie Moffa:

"I still have a job
But fear keeps me from spending,
Which might drag this out."

"Shopping was a treat.
Now it scares me to no end.
I can't buy that dress."