Accessibility links
'Up' Director On Striking A Balance Filmmaker Pete Docter's new movie is Pixar Studio's animated film Up. Docter discusses how his team of writers and animators struck a balance between the very adult themes in the film and the colorful and buoyant adventure story for kids.

Filmmaker Pete Docter's new movie is Pixar Studio's animated film Up. Docter discusses how his team of writers and animators struck a balance between the very adult themes in the film and the colorful and buoyant adventure story for kids.

From NPR News, it's ALL THINGS CONSIDERED. I'm Melissa Block. The new movie titled "Up" from Pixar Animation is about what happens if you tie 20,622 helium balloons to your house. "Up" features a grouchy old man...

Mr. ED ASNER (Actor): (As Carl Fredricksen) Ah, for the love of Pete.

BLOCK: ...and an enormous tropical bird.

BLOCK: "Up" is directed by long time Pixar animator Pete Docter, who also wrote the story and screenplay.

Pete Docter, welcome to the program.

BLOCK: And let's talk about the inspiration for this, this character of the grumpy old man, Carl Fredricksen. Where did he come from?

Mr. DOCTER: Yeah. Well, Bob Peterson and I - Bob is the co-writer and co-director on the film - we just all of a sudden - it would be fun to do something with a guy with a lot of attitude, you know, somebody who you really got a sense of who he was right away. And we kept drawing pictures, and I drew this really grumpy, grouchy guy with this happy, fun bunch of colorful balloons, and it just seemed like there was something interesting there, and we started playing with that, and that was the origins of the movie.

BLOCK: So you drew him originally holding balloons.

Mr. DOCTER: Yeah, there was something about - I guess balloons somehow seemed to be like a metaphor somehow for life, that there is something very temporal about them. You only have them for a short amount of time. They either - you accidentally let go, and they float away, or they shrivel, and they're gone, and there was something about that that seemed to relate to relationships and life that Bob and I started playing with. And we came up with this little relationship between this old man and this Wilderness Explorer who has every single badge that he needs except his assisting-the-elderly badge, and that's why he's been pestering Carl.

Mr. NAGAI: (As Russell) I could help you cross the street.

Mr. NAGAI: (As Russell) I could help you cross your yard.

Mr. NAGAI: (As Russell) I could help you cross your porch.

Mr. NAGAI: (As Russell) Well, I got to help you cross something.

BLOCK: And this is the character of Russell, this Wilderness Explorer, and he is voiced by, I gather, a newcomer, somebody who had not done work like this before.

Mr. DOCTER: Yeah. He was voiced by this kid named Jordan Nagai, who wasn't actually even going to try out initially. It was his brother who came in to answer the audition call. And they said, well, Jordan, why don't you step up here and say a few things, and just tell about something you did today.

And I think he was talking about his judo class or something and just had this very innocent, charming-sounding voice. So we cast him, and we had to work a little bit to get some of the acting things, but you know, so I would trick him into doing certain things, having to run around, jump up and down, or I'd have to hold his arms by his side and say, okay now - because we wanted some struggle kind of vocalization. So try and get your arms free as you're saying this line, sort of, I want to help, you know, or whatever the line was, so...

BLOCK: Oh, you'd be physically restraining him so his voice would sound right.

Mr. DOCTER: Yeah. With his permission, of course.

BLOCK: Of course, and his mother.

BLOCK: Well, Carl Fredricksen and Russell, the Wilderness Explorer, end up going on this grand adventure on this house lifted by balloons to South America, and they run across some incredible characters, all of whom are dogs. And it's clear when you watch this movie that somebody working on this, and I have a feeling it might be you, really knows dogs.

Mr. DOCTER: Well, yeah, a lot of us have dogs. I have had a couple dogs, and you know, what we always end up doing is doing dialogue for the dog. So as we're sitting eating dinner, the dog is sitting there and we make up, you know, are you going to eat that because I could help you eat that. If you need help, I'm right here.

I think the twist on it was we allowed the dogs to speak not by moving their lips but by having these collars, which translate their thoughts, right. So the dogs can sit there and act like real dogs, and the collars translate the thoughts, which you know, we try to focus on things that dogs would really find important like, you know, sniffing and food and squirrel, you know, things like that, and so...

BLOCK: Well, here's the first scene, when Carl and Russell meet the friendly dog. This is Dug the dog.

BLOCK: And squirrel becomes just a recurring laugh line throughout the movie.

Mr. DOCTER: Yeah. Well, you know, dogs, they have a thing for squirrels for sure, at least mine do.

BLOCK: And the other leading character here is this gigantic, multi-colored, fabulous bird that they discover in South America who Russell promptly names Kevin. How did you come up with what Kevin the bird should look like?

Mr. DOCTER: Well, Kevin was a tricky character to design. And Ricky Nierva and the other design team, we studied tons of real-life birds, starting with these kind of cranes and herons and, you know, for the sort of anatomy. We actually brought in a live ostrich here to Pixar, which you know, just another day at work, having an ostrich running around on the lawn.

Mr. DOCTER: But - and then we studied this thing called a monal pheasant, which is I think, they said, the most iridescent bird on Earth, which is this beautiful, multi-colored - they're found in the highlands of China, I think.

And anyway, Kevin is kind of an amalgam of all these things, these elements that we liked from real birds, and we created this made-up one.

BLOCK: You know, the back story to all of this is this really quite incredible and very briefly told love story between this old man who, starting when he was quite young, as a kid, and the girl he meets, Ellie, and they become explorers together as children, and then there's this incredible montage where you see them getting married and taking picnics together, lying on the grass, looking at cloud shapes and also some very, very sad moments in their life.

Mr. DOCTER: Yeah. Yeah, we discovered early on that the story we were telling was basically about what real adventure in life is and, you know, how so often we think of adventure as travel to exotic places and seeing fantastic creatures and sights that no one else has seen. And really, what Carl comes to discover is that - the truth, the thing that adventure really is, is this wonderful relationship that he had with his wife. And so, even though he never got the former, he definitely had the latter, and we needed to show that in the movie.

BLOCK: How important is it to you to balance, you know, the obvious fun and excitement and pure joy of movies like this and sort of the darker and deeper underlying themes that are all over this movie? I mean, there's an absentee father, and there's the loss of a lifelong love. How do you make those two things mesh, and how important is it that there are both of those things in this movie?

Mr. DOCTER: Well, looking back on the films that I grew up on that I loved as a kid and still love today, they all seemed to have those elements, you know, that there is, say for example, "Dumbo."

There is a lot of fun. There's "Pink Elephants On Parade" and all the fun with flying with the storks, and yet you also have these very tender, sad scenes that as a parent now, you look, and you go, oh my gosh, they can't even see each other. They can only hold trunks through the cage, you know, those - the "Baby Mine" sequence is just so touching.

And to me that's what makes those movies stick with you. You know, they're a lot of fun, a lot of action and adventure, but unless you have that emotional kind of touchstone and foundation, it doesn't really stay with you as you leave the theater, and that's what we were trying for in this film.

BLOCK: Well, Pete Docter, it's been great talking with you. Thanks very much.

BLOCK: Pete Docter is the director of the new film "Up."

BLOCK: This is ALL THINGS CONSIDERED from NPR News. 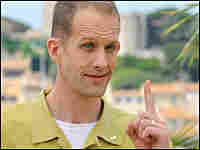 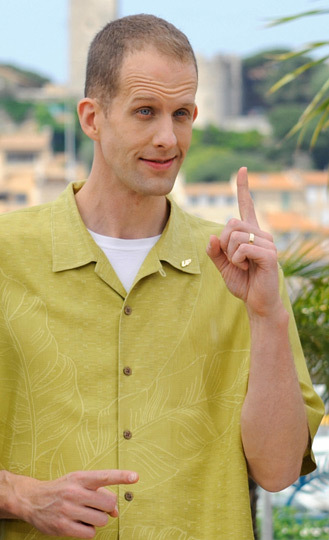 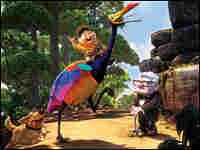 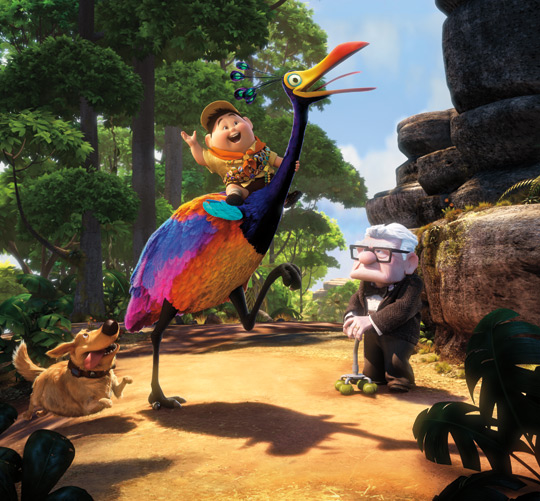 Unlikely Allies: Eight-year-old Russell, septuagenarian Carl and 13-foot-tall Kevin find themselves exploring a South American jungle together in Up-- despite Kevin's tendency to swallow Carl's walker.