Accessibility links
Tiananmen: Shouts That Turned To Silence Two decades ago, Xiao Bin, a 42-year-old factory worker, claimed he saw tanks crush student demonstrators in Tiananmen Square. After he spoke to American journalists, he was sent to labor camp — and his story became a well-known cautionary tale.

Two decades ago, the world watched as thousands of Chinese students and their supporters occupied Tiananmen Square for weeks demanding democracy — and then were violently removed on June 4, 1989, by the Chinese military. NPR's western bureau chief, Alisa Joyce Barba, was a TV producer in Beijing at that time. 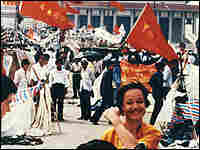 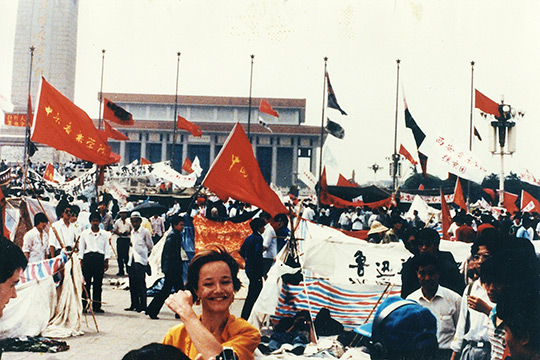 NPR's Alisa Joyce Barba (foreground) was a TV producer for ABC News in Tiananmen Square during the protests in 1989. 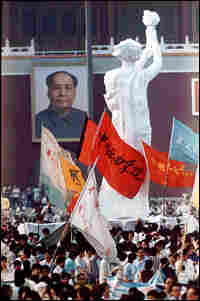 A portrait of Mao Zedong faces off with a statue dubbed The Goddess of Democracy in Tiananmen Square in 1989. Jeff Widener/AP File hide caption 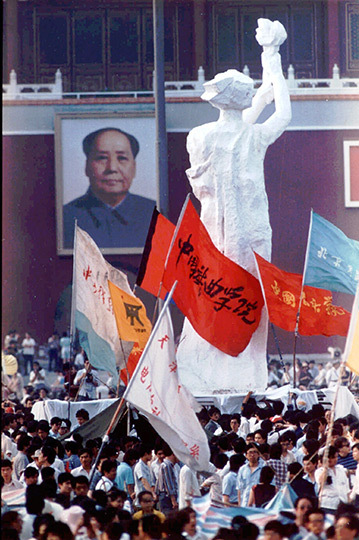 A portrait of Mao Zedong faces off with a statue dubbed The Goddess of Democracy in Tiananmen Square in 1989.

I sent a man to labor camp 20 years ago this week. His name was Xiao Bin. He was 42 years old, a factory worker from the northeast Chinese city of Dalian. It was a day after the Chinese troops had cleared out Tiananmen Square in the heart of Beijing. It was June of 1989. The city was a wreck: streets still full of burned debris; roaming crowds of angry and excited citizens; tanks still playing chicken with students on the main thoroughfare.

We were two or three blocks away from Tiananmen Square, on a side street. I was working with ABC News correspondent Jim Laurie and a camera crew. There were crowds everywhere, talking excitedly. One group had coalesced around a tall, thin, middle-aged man who was shouting and gesticulating. "The tanks ran over students," he declared. "They ran right over them as they sat in the square." We turned our cameras on him. "Did you see it yourself?" I asked. Those words came to haunt me, "Ni ziji kan ma? Ni ziji kan?" "Yes, I saw it myself," he responded.

We were all still trying to sort out the truth of what had happened on Tiananmen Square that night. Who died? How many? Where did they die? Confirmation of anything that had really happened or was happening was impossible to come by — it was a state secret.

Two days after our story aired on ABC World News in the U.S., the raw footage of our interview with Xiao Bin appeared on Chinese nightly news. There was our shot of the tall, angry, gesticulating man, my voice asking him, "Did you see it yourself?" and him saying, "Yes, they ran over students with tanks." And then below this shot, a scroll overlaid the footage, saying, in Chinese, "This man is a counterrevolutionary rumor-monger. If you see him, turn him into the Public Security Bureau." The next day he was shown on national TV on his knees, crying, asking forgiveness for his crimes. He was sentenced to 10 years in a labor camp.

We watched that TV footage in our hotel rooms. It felt very personal. It felt like the Chinese state, its vast security apparatus, had come right into our rooms, into our faces and said, "We will hurt the people who talk to you, and we will silence you." It was terrifying.

In the months and years after Tiananmen, as the crackdown continued, reporting in China changed. And that's partly because of Xiao Bin. His became a well-known cautionary tale, at least in Beijing: This is what happens if you speak to foreign journalists. We'd interview people and they'd ask, "Will I get in trouble if I speak to you?" Honest answer: Yes. You will.

In the 20 years since the terror of those days, China has prospered beyond anyone's wildest imaginings. Beijing today is unrecognizable from the city that hosted those marches, demonstrations and hunger strikes. Its population of bureaucrats and intellectuals, who once joined the students in jubilant protest, has grown rich and appears to have made an implicit deal with the Communist Party — you enrich us, and we'll stay off the streets. We'll be quiet.

One has to wonder, though, with this global recession, as cracks are beginning to appear in the armor of the Chinese economic juggernaut, will that deal endure?

And finally, what happened to Xiao Bin? Five years after he was sent to labor camp, a small item appeared in the Chinese news — Xiao had been paroled. He was sent home to Dalian and tracked down there by ABC staffers still working in China. Xiao was in poor health, they discovered, and he wanted help to go to America. That was the last we heard.