Accessibility links
Census: The Hard Task Of Counting New Yorkers Census workers are already preparing for next year's once-in-a-decade count. In New York City, the census response rates have lagged behind the national average. This year, officials are promoting it early, with mailings, a press conference and targeted messages for ethnic media. 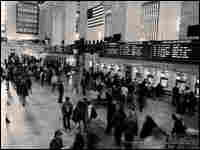 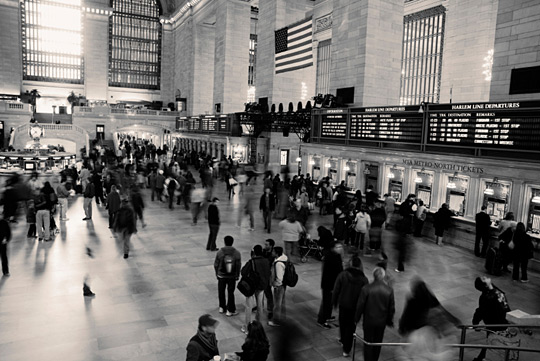 People travel through Grand Central Station in New York City. Tracking who lives in the city is an incredibly challenging task for census workers.

NYC Response Rates From The 2002 Census

The Changing Face Of Race In America: Explore Census Data State By State

Census workers are already on the streets preparing for next year's once-in-a-decade count, and their task sounds easy enough. First, they must confirm each address to know where to mail the forms. Next year, they'll knock on the doors of anyone who hasn't sent back the questionnaire, prodding people to fill it out and return it.

But in New York City this task is incredibly difficult, and census response rates have chronically lagged behind the national average.

To understand the challenge, you need only stroll a working-class street in central Brooklyn with the U.S. Census Bureau's regional director, Tony Farthing.

"New York City is the undisputed king of the multiunit structure," Farthing says. "We just have so many different varieties."

Farthing stops in front of a building and gestures toward the business on the first floor and a door leading to residential housing above.

"These are the ones I love," Farthing says. "You got a house here, there's a gate on it. You look up, it could be one or two apartments, you don't know. There is an address, so that's nice."

But there's no doorbell and the gate is locked. Farthing says census workers are reduced to hoping there's an open window and shouting up. One thing census workers love to see: gates on windows. That means it's likely that children live there.

"So right around the time when school lets out, you cross your fingers, maybe some children are coming home," he says.

Then there are the places where people don't want you to find them: New York's ever-popular illegal sublets, and the extra living spaces that have been carved out or added on.

"They're not supposed to, in some cases, rent it out to someone," says Farthing. "And they haven't registered it with the city, and they don't want you to know. There are all kinds of things that we're fighting against."

In addition to its difficult housing landscape, New York City also has in spades just about every group that's statistically least likely to mail back a census questionnaire: young singles, African-American men, hundreds of thousands of public-housing residents, and an evolving mix of immigrants.

That 3 million is more than a third of the city's population — people who may not speak English and may never have heard of a census. Since the last count, New York's demographers have been trying to track the constant migration of various ethnic groups in, out and around the city.

"They can track births to foreign-born mothers," says Cumberbatch, and in that way recently discovered that a significant population of Sudanese had settled in a certain area of Brooklyn. That will be helpful information for census counters next year.

New York has also mapped the response rates from the 2000 census, and that has revealed some surprises. The heaviest concentration of Spanish-speakers had a higher-than-average response rate. Cumberbatch credits good organizing. The lowest response rates were in heavily African, Caribbean and African-American neighborhoods, including in central Brooklyn.

There, leaning on a cane under the screeching, elevated train from Manhattan, a 62-year-old African-American man scowls when asked about the census. He gives only his last name, McCoy, and complains that the census has been going on since the Emancipation Proclamation, but for what?

"The country is the same as it was in the 1800s," he says. "The rich are rich, the poor are poor, and never the twain shall meet."

McCoy says blacks just don't trust the U.S. government. Still, he guesses he'll probably fill out the census form, if someone comes to his door.

That's key. After the last count, research showed that a lot of black residents were waiting for someone to personally collect the forms, regional director Farthing says. This time he wants to be more specific in telling people to mail back the questionnaire. Officials are also promoting the census early — with mailings, a press conference by Mayor Michael Bloomberg and targeted messages for ethnic media.

New York officials hope everyone has absorbed the message that it's important to be counted by census day next April.

Weighing Ethnicity When Picking A Spouse May 31, 2009
Immigrants Urged Not To Participate In Census May 11, 2009
2010 Census Stirs Debate In Washington April 19, 2009
Census Makes Early Pitch To Minority Communities April 1, 2009