Accessibility links
Nutrition Program Boosts Poor Students In China Migrant workers' children at the Dandelion Middle School in Beijing were given three meals fortified with micronutrients each day for eight months. Their health improved dramatically after the experiment, as did their test scores. 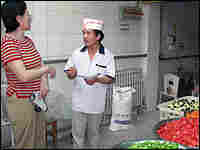 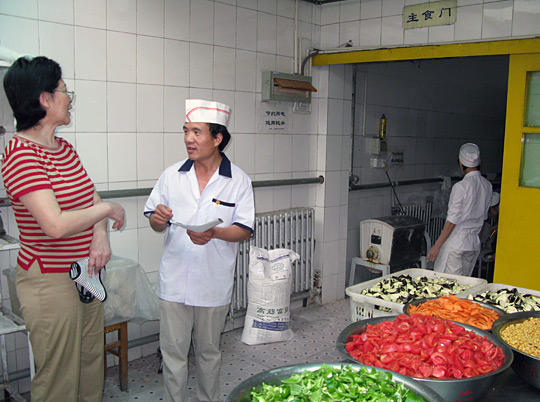 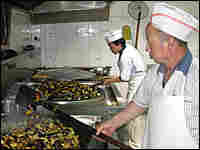 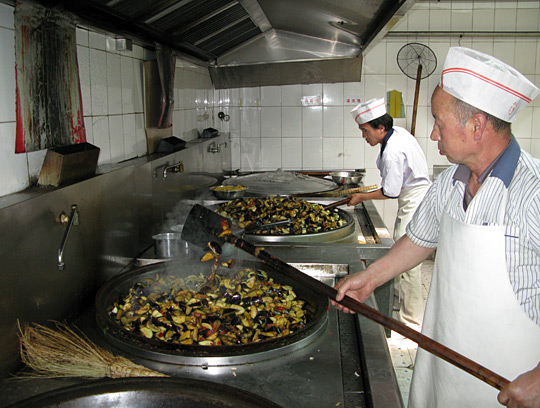 Chefs use fortified cooking oil and soy sauce to whip up an extra-large portion of spicy eggplant. 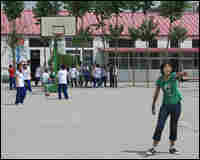 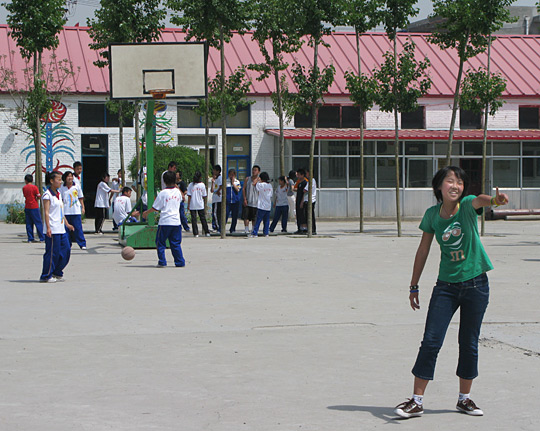 Students play basketball at the Dandelion School, which serves the children of migrant laborers.

Without enough calories, you'll die for sure. Without enough micronutrients — vitamin A and zinc, for example — you might live, but not long or well. Luckily, progress is being made in developing fortified foods for the poor whose lack of micronutrients would otherwise stymie their efforts to cast off poverty.

The Dandelion School, Beijing's only government-approved middle school serving migrant workers' children, has run a successful program of micronutrient intervention in cooperation with China's Center for Disease Control and Prevention.

Standing by the school's athletic field where students are playing basketball, Principal Zheng Hong explains that beginning in 2006, the school gave students three fortified meals a day for eight months. Blood tests before and after the experiment showed a vast improvement in the students' levels of nutrients, including vitamins A, B-1, iron and zinc.

"After eight months of the intervention, it's improved dramatically," Zheng says. "Now we are surpassing the numbers in the countryside, and even higher than the national average, but still not there in comparison with the city average."

Despite Beijing's increasing affluence, migrant laborers remain an underclass, and it shows in their kids' nutrition. Zheng says kids come to the school nearly 4 inches shorter and 22 pounds lighter than average kids their age.

The school's volunteer physician, Chen Qing, says that many migrant laborers' kids are used to fending for themselves at mealtime.

"In the countryside, kids are assured of getting three meals a day, because their parents are at their side — but not these kids," she says. "Their parents struggle to earn money, but when they've made some, sometimes they just go off and enjoy themselves."

A Boost Of Energy

In the school's kitchen, Chef Liu stirs huge woks full of spicy eggplant, ground pork and vegetables. The fortified foods he cooks are ready to use and locally made, both of which experts say are important in nutritional intervention programs.

Liu shows visitors boxes of soy sauce fortified with iron and boxes of vitamin A soy bean oil, which is used to stir-fry the dishes. Nearby are huge plastic sacks of rice, containing little yellow vitamins.

Among the kids lining up for lunch is eighth-grader Liao Shuli. Her parents are farmers who moved to Beijing three years ago from a poor area of central Henan province.

She says that without the nutrition the school provides, she wouldn't have enough energy to make it through all her classes.

"Before at home, I just ate instant noodles," she recalls. "My skin was yellowish and I was skinny. I felt like I was sick. Once I started coming to this school, I stopped snacking and I ate fortified rice. My skin became fairer, and I felt healthier and more energetic."

"They don't look different, so it's hidden," he says. "It's not like seeing skinny, wasted, famine-stricken populations, and yet it's as deadly. And it holds back development, because development depends on having energy, surviving infectious episodes, having the best IQ you can get out of your genetic framework."

Sommer and other experts say that increasing micronutrients is the most effective form of public health intervention, creating $17 worth of economic benefits for every dollar invested.

Principal Zheng says that the ultimate payoff from nutritional intervention is the students' longer attention spans and higher marks on standardized tests to get into high schools.

"When the students walked into Dandelion, the passing rate was less than 1 percent. Last year's passing rate was 98 percent," she says. "We are proud of that." When asked whether this was due in part to the nutrition and not just the teaching, she responds: "Definitely."

Zheng adds that the nutritional experiment is now a permanent part of the school's mission: to give migrant laborers' kids the education that society has denied them.