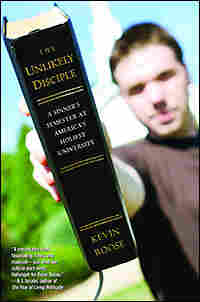 It's midnight at Liberty University, and I'm kneeling on the floor of my dorm room, praying.

This is not a particularly unusual event. Any night of the week, a quick stroll through Liberty's campus would reveal hundreds of students in the same position, making the same kind of divine appeal. At this school, we pray for everything: good grades, a winning football season, religious revival in America, chicken fingers in the dining hall.

Our God is a workhorse God, and as the Bible instructs, we petition him without ceasing. Put it this way: if prayers emitted light, you'd see us from space.

Our chancellor, the Reverend Jerry Falwell, always tells us that prayer is the key to a productive Christian life. And, well, he should know. In 1971, Rev. Falwell felt God calling him to start a Christian college in his hometown of Lynchburg, Virginia. He answered the call, and over the next thirty-six years, while organizing the Moral Majority, shepherding one of America's largest megachurches, and establishing himself as the father of the Religious Right, he found time to transform that Christian college into what it is today: the world's largest evangelical university, a ten thousand–student training ground for America's conservative Christian youth. "Bible Boot Camp," he calls it.

It's a tongue-in-cheek name, but a fairly accurate one. Like a West Point drill sergeant, Rev. Falwell prides himself on discipline. His field manual, a forty-six-page code of conduct called "The Liberty Way," governs every aspect of our lives and dispenses concrete punishments when we veer off course. Such as:

Rev. Falwell envisioned Liberty as a Christian safe haven where young evangelicals could get a college education without being exposed to binge drinking, pot smoking, sexual experimentation, and all the other trappings of secular coed culture. He planned to make it the evangelical equivalent of Notre Dame or Brigham Young, a university where every student would be trained in the liberal arts, fortified in the evangelical faith, and sent out into the world as a "Champion for Christ."

That plan must have worked, because today, our school is still a bastion of sparkling Christian purity—sort of the anti-Animal House. On this campus, you'll find girls who are saving their first kisses for marriage, guys whose knowledge of the female anatomy is limited to the parts you can show on basic cable, and students of both sexes who consider it a wild Friday night when their Bible study group serves Cheetos and Chex Mix.

Of course, you'll also find Liberty students who aren't so sheltered, who don't walk around campus humming hymns and speaking in parables. Like any other religious community, Liberty has its fair share of nonconformists. A few Liberty students, in fact, choose to live relatively normal collegiate lives, even when it means violating "The Liberty Way." That's why I'm praying on the floor of my room tonight—because my friend Dave is in trouble.

It started last Friday afternoon when Dave, a brawny, goateed shotputter on Liberty's track team, approached his friend Wayne with an idea.

"Let's get out of here for the weekend," he said.

Dave explained that one of his high school friends, a non-Christian girl named Jessie, had invited both of them to a special party at her secular college, three hours away from Lynchburg.

Wayne chuckled. "Naw, man. You know we can't do that."

He was right. Attending a party of any type is forbidden under "The Liberty Way," but a lingerie party would be off-the-charts sinful. Still, as Dave talked more about the party and how many beautiful, scantily clad girls would be there, he felt his resistance weakening. I mean, I haven't been off campus all semester. And what harm could one night do? By the time Dave finished his pitch, Wayne's mind was made up: he wanted to go. The party wouldn't be holy, but it wouldn't be the worst thing in the world, either. So the two friends signed out on the campus log sheet — to the off-campus apartment of an older Liberty student they knew — and drove to secular school instead.

The party was wilder than they'd expected. Girls clad in sheer negligees and lacy bustiers floated around the room, grinding lustily with each other, while loud hip-hop music blared over the rowdy yells of beer pong players. Dave had gone to some parties in high school, but Wayne was relatively new to the scene, and getting comfortable took three or four cups of a beverage he'd never heard of ("jungle juice," was it?).

After an hour of drinking, Dave and Wayne felt loose enough to unveil their big surprise: two pairs of special underwear, purchased in advance for the occasion. Dave stripped down to a black man-thong, and Wayne, a bit more reserved, wore a pair of SpongeBob SquarePants boxers. They drank and danced and cavorted with the secular students until the wee hours, using Dave's digital camera to snap the photos he would eventually post, for posterity, on his MySpace profile.

That was the fatal step, of course, and no one can quite understand why Dave did it. Did he really think his secrets were safe on the Internet?

Was he trying to get kicked out?

These are the questions that have circulated the halls of our dorm for the past week. By now, we've heard all the stories. We've heard how, a few days after the party, Dave found an urgent e-mail from the dean of men waiting in his inbox. How, when he was brought in to the dean's office, Dave tried to make the case that he hadn't been at the party. How the dean had pulled from his desk a stack of photos, culled from Dave's MySpace page, that proved otherwise. How some of the photos had been shockingly lewd, including one of Dave in his man-thong, holding a bottle of liquor in each hand while looking up a girl's skirt. How Dave had broken maybe half the rules in "The Liberty Way," including "Attendance at a dance," "Sexual misconduct and/or any state of undress," and "Possession or consumption of alcoholic beverages." How he was served with the biggest punishment on our hall — and maybe at Liberty — all year: seventy-eight reprimands, a $650 fine, and thirty hours of community service. How, at that point, adding up Dave's punishments was a matter of procedure, like sentencing a serial killer to twenty-three consecutive life sentences, because the alcohol alone was enough to expel him.

In short, the guy needs a lot of prayer.