Accessibility links
Mexico Drug Violence Spills Into Guatemala As Mexican narcotics cartels come under increasing attack on their home turf, they have expanded their operations. One of the countries hardest hit is Guatemala, just across Mexico's southern border. Brutal drug traffickers are thriving amid the country's poverty and corruption. 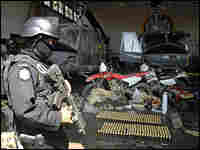 An anti-narcotics policeman stands guard in Guatemala City over explosives and arms confiscated at a camp of alleged Mexican drug traffickers on March 27. Guatemalan soldiers and policemen discovered the camp at a ranch near the border between Guatemala and Mexico, which was being used by members of the Zetas, a group of former Mexican soldiers allied with the Gulf Cartel. Alexander Martinez/AFP/Getty Images hide caption 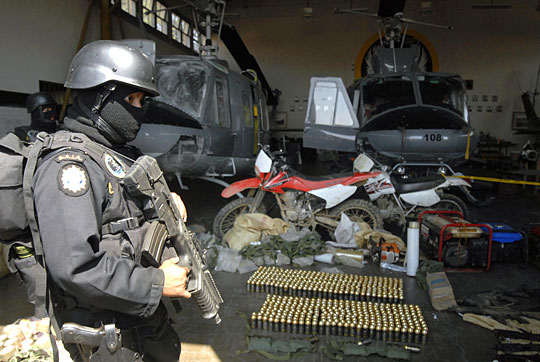 An anti-narcotics policeman stands guard in Guatemala City over explosives and arms confiscated at a camp of alleged Mexican drug traffickers on March 27. Guatemalan soldiers and policemen discovered the camp at a ranch near the border between Guatemala and Mexico, which was being used by members of the Zetas, a group of former Mexican soldiers allied with the Gulf Cartel.

As Mexican narcotics cartels come under increasing attack on their home turf, they have expanded their operations. Alleged Mexican drug gang members have been arrested as far south as Argentina.

Since Mexico launched an offensive against the cartels two years ago, their presence in Central America has grown dramatically. One of the countries hardest hit by the Mexican criminals' expansion is Guatemala, just across Mexico's southern border.

Guatemala is one of the poorest countries in the hemisphere, and its government is wracked by allegations of incompetence and corruption. Just a few weeks ago, the president was accused of murder.

Guatemala's problems have made it a paradise for drug traffickers. They thrive in the chaos, where they can easily bribe officials as they move cocaine north from Colombia toward the United States.

A Neighborhood Controlled By Traffickers

El Gallito is a barricaded barrio of Guatemala City. There are only two streets in and two streets out. All the other roads have been cordoned off with concrete blocks.

Women sell vegetables from makeshift stalls on the street. Young boys on bicycle taxis blare their radios while waiting for customers.

Soldiers sit in sandbagged kiosks while police patrol in pickup trucks. But residents say the cops and the military are there only for show: The drug cartels run El Gallito.

At night, people drive with their windows rolled down and their interior lights on so that gang lookouts won't shoot them.

Several people decline to be interviewed, saying they'd be killed if they were caught talking to a reporter.

A local priest, Jose Barrios, says if you walk around El Gallito you won't see street thugs, robbers or prostitutes.

"This is a clean neighborhood," he says. "The only issue is drug trafficking."

Barrios, who runs a small evangelical church in El Gallito, says the muchachos, or "the boys" as he calls them, control the area. They keep the streets clean. They enforce the cartels' rules.

But one downside is that outsiders — taxis, delivery drivers, public servants, journalists — don't usually enter. Even the coroner won't come into El Gallito.

If someone gets killed, Barrios says, the boys bring the body out to the barricades on the edge of the neighborhood.

"The muchachos take the body out to the avenue," he says. "The city officials see it out there, and they pick it up."

Guatemala Declares Its Own War On the Cartels

Carlos Menocal, one of Guatemalan President Alvaro Colom's top advisers on security, says that over the past two years, Mexican cartels have moved aggressively into Guatemala.

Mexican traffickers have taken over entire parts of the north of the country, he says.

"One of the objectives of the government is to reclaim territory from the Mexican cartels," Menocal says. "This is a war, and to fight these criminals, we need to have a military presence in these areas."

Menocal says the Mexicans, particularly a group called the Zetas, are setting up airstrips and warehouses in remote parts of the jungle.

The Zetas are a group of former Mexican soldiers allied with the Gulf Cartel.

Menocal says the Zetas operating in Guatemala are well-organized, and have plenty of money and arms.

"We've dismantled bases from Los Zetas in which we came across anti-aircraft guns, military uniforms, anti-personnel mines," Menocal says. "We suspect that these guys are preparing to defend their territories inside Guatemala."

Drug trafficking is not new to this Central American nation. Locals have been plying the trade for decades. But officials say the Mexican smugglers have changed the climate.

In December, a shootout involving Mexican gangs — allegedly over a disputed horse race — killed 17 people. Another Zeta rampage in the capital left 11 dead. Guatemalan police say the Zetas have issued death threats against the president.

The Mexican traffickers, on the other hand, are brutally gunning down their rivals and intimidating local officials, Castillo says.

Mexico is a much larger country with far greater resources to fight these groups, yet Mexico has been struggling to contain them. Castillo says the Mexican drug cartels pose one of the greatest threats to Guatemala's future.

"In a country as weak as Guatemala, this could be devastating to the state," he says.