Accessibility links
N.Y. Philharmonic Bids Farewell To Clarinetist When clarinetist Stanley Drucker retires from the New York Philharmonic at the end of June, he will have played in more than 10,200 concerts, with 400 different conductors, over a 60-year tenure. 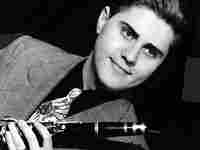 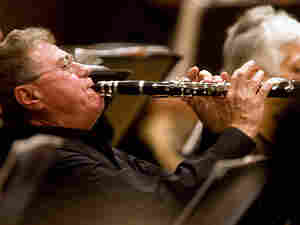 Anyone who has listened to a recording of the New York Philharmonic, or seen the orchestra live or on TV, has definitely heard first clarinetist Stanley Drucker.

That's because Drucker has played with the Philharmonic for the past 60 years, or nearly one-third of the orchestra's history. When he retires at the end of June, he will have played in more than 10,200 concerts. And Drucker will be going out with a bang, including with one of his signature pieces, the Clarinet Concerto by Aaron Copland.

Benny Goodman may have commissioned Copland's concerto, but Drucker owns it. He's played it 59 times with the New York Philharmonic.

"The piece was written in the early '40s," Drucker says, "and it's got elements of jazz, in a way, though Benny Goodman always said, 'Play the eighth-notes straight, don't syncopate them.' It's a piece that audiences react to and respond to."

Drucker will be standing in front of the Philharmonic for three more performances of the concerto, beginning Thursday evening. It's the orchestra's way of paying tribute to its longest-serving member. Mark Nuccio, associate principal clarinetist in the orchestra, says Drucker is an iron man.

"He's probably the most reliable colleague I've ever had the opportunity to work with," Nuccio says. "And if he were to get sick, I would be the person who would have to come in and play at the last minute. And you can get kind of comfortable with Stanley Drucker, because he just doesn't get sick."

"I heard Walter say, 'He'll be a very valuable member of the orchestra,' " Drucker recalls. "And a week later, I got a letter, this contractual letter, and it took me about five seconds to sign it."

So at the age of 19, Drucker found himself on the stage of Carnegie Hall for his first rehearsal. It was Richard Strauss' Also Sprach Zarathustra, with Dimitri Mitropoulos conducting.

"Well, I never heard anything like it," Drucker says. "I mean, it was overwhelming, unbelievable. It was incredible hearing those soloists in the orchestra. Every rehearsal was a master class, where I could learn from some of these people."

Drucker has performed with 400 different conductors over the past 60 years, and with 10 music directors. While he expresses affection for all of them, Leonard Bernstein clearly holds a special place in Drucker's heart.

"He wasn't only a conductor — I mean he was a terrific pianist, writer, a lecturer, teacher, composer," Drucker says. "His era was one of innovation and a lot of imagination. It showed what the real ingredients are for a great performance — which are joy and passion — and he had that in spades."

It's Drucker's joy for playing that impresses his colleagues, like Jon Deak, a 40-year veteran of the bass section, who's retiring this June as well.

"He doesn't play any note straight," Deak says. "There is always a distinctive tone quality to what he produces. There's a certain edge and eagerness to his playing that just makes Stanley, Stanley."

"When I showed Stanley the first movement of the concerto, it was the only time I've ever seen him in his life look terrified," Corigliano remembers. "But I showed him his part, and his eyes got very big. And he said, 'How am I gonna play this?' And then he started playing it and, of course, in no time at all, he found that he could not only play it, but that it sounded like a million dollars when he did."

Drucker's final performance with the New York Philharmonic will be of Gustav Mahler's Eighth Symphony on June 27.

Once that's done, Drucker says he's going to do what he's always done.