Accessibility links
U.S. Helps Afghans Assume Control Of Local Security In Afghanistan's volatile Wardak province, U.S. Special Forces are setting up a neighborhood watch program with local recruits that officials hope will help drive out Taliban extremists and other militants. But critics say it doesn't address the real problem: the disconnect between Afghans and their government. 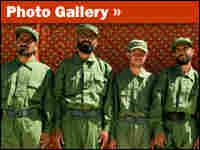 Afghan Public Protection Force members, known as Guardians, and a community elder make themselves at home inside a container used as a new checkpoint near the village of Badam Kalay, in Wardak province, Afghanistan. Holly Pickett/Atlas Press for NPR hide caption 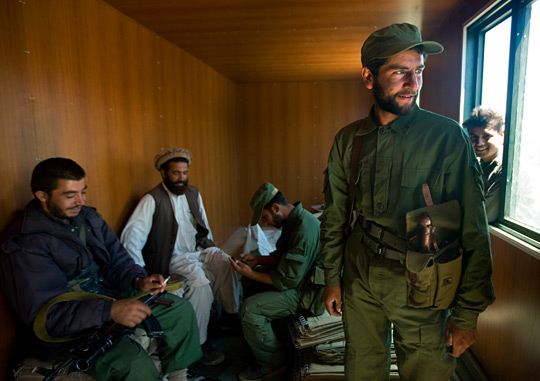 Afghan Public Protection Force members, known as Guardians, and a community elder make themselves at home inside a container used as a new checkpoint near the village of Badam Kalay, in Wardak province, Afghanistan.

In volatile Wardak province, bordering the Afghan capital, U.S. Army Special Forces are establishing a neighborhood watch program that U.S. and Afghan officials hope will help drive out the Taliban and other militants.

Members of the Afghan Public Protection Force, known as the Guardians, carry Kalashnikov rifles to protect their families and homes. But the Guardians' most effective weapons may be radios and cell phones. Their U.S. trainers hope the Guardians will use the devices to call for Afghan and American military reinforcements if they see militants in their area.

The idea is to get local Afghans to take charge of securing their villages against militants who find safe haven in the isolated, mountainous region that Afghan and U.S. soldiers have been unable to control.

Several hundred Guardians, who received three weeks of training and were issued AK-47s, have started patrolling their home villages in districts around the provincial capital of Maidan Shahr. Each receives the equivalent of $100 a month plus $24 for food. They patrol in white Ford Ranger pickups.

Critics charge that the pilot program is nothing more than a U.S. attempt at a quick fix in Afghanistan without addressing the real problem: the disconnect between Afghans and their government.

Afghans Enthusiastic, If Not Disciplined

On a recent spring day, a U.S. Special Forces team arrives at the new highway checkpoint in Wardak province, just west of Kabul. The Green Berets want to see how the local guards they have deployed here are doing on their first night.

The Americans soldiers search with flashlights in the rain for the missing guards, who are quickly found.

The Afghan guards walk over from a gas station across the street and greet their Special Forces advisers with a few words of English. The guards say they are spending the night at the gas station because the metal container that is their new checkpoint base doesn't have blankets. Nor is the generator set up yet.

The American officer, "Johnny," who declines to give his name for security reasons, gives them a patient smile.

Such glitches are to be expected, he says. It is the guards' first night, after all. He says the men make up in enthusiasm what they lack in discipline.

He explains to the Afghan men that they will need to take care of a few tasks — fill sandbags, get the generator running — in order to stay at the metal-container checkpoint all the time.

The guards assure him they will do so in the future.

Johnny leaves, satisfied. He says having local guards on this stretch of road 24 hours a day — Afghans who can identify who belongs here and who doesn't — will go a long way to improving security in the area.

Wardak province serves as the main route for suicide bombers and gunmen infiltrating Kabul. While U.S. and Afghan troops have flooded Wardak recently as part of the U.S. strategy to secure Afghanistan, it is the nascent Public Protection Force that many Afghan and U.S. officials believe will ultimately succeed.

The goal is to eventually have 1,800 Guardians across the province, says Halim Fidai, Wardak's governor. He and others would like to see the program replicated around the country.

"This will be successful because people in the community defend themselves through their own hands, and the bad guys, who are coming from another community or another province or another country, will gradually lose the support of these communities," he says.

Tribal elders and local leaders select which men they want to serve as Guardians. The recruits are then screened by various Afghan agencies, including the Interior Ministry, which oversees the $18 million pilot project.

As an added incentive, local communities that agree to host Public Protection Forces are granted up to $500,000 in development projects.

A 'Perception Of Security'

Officials say it is too early to say how much of a difference the force is making. But a U.S. Special Forces commander, who also cannot give his real name for security reasons, says local residents are starting to relax and move freely in areas where the Guardians are on patrol.

"It's that perception of security that's allowing the people to feel a change in their environment, so that months from now, when somebody makes a decision for this adviser and all of his crew to move on to another place, we've established a change in the environment. That allows for the perception of security to continue, and the population now takes responsibility for their own security," he says.

Still, the program has been slow to catch on. Many local officials remain skeptical of the central government's intentions, given past attempts to create militias and auxiliary forces that in many cases added to the country's instability.

"It has to have the buy in, and where do you get that?" asks the American commander. "That is the hardest part of it. How do we get the Afghan population to buy into the program when, for years, government-sponsored programs have not been their favorite topic of acceptance?"

But Western critics of the program say a better question is why the United States is trying to build yet another security force instead of improving local governance in the area.

A Western diplomat, who refused to be identified or recorded because of the sensitivity of the matter, says that the Ministry of Interior is incapable of managing the program.

The diplomat says the ministry, with its long history of corruption, can't keep track of the policemen it already has.

Joanna Nathan, senior Afghanistan analyst for the International Crisis Group, says the Public Protection Force appears to be another in a long line of militias.

"I think what has never been properly explained is that the problem here is that the police are not well-trained, they are not accountable," she says. "So how does having people who are even less trained and less accountable, how is that likely to improve things?"