Accessibility links
Big Firms Eye 'Open Innovation' for Ideas "Open innovation" is becoming a business buzzword as big companies look beyond their ranks to seize good ideas wherever they can be found. But for some major firms, including U.S. automakers, the concept is harder to put into play. 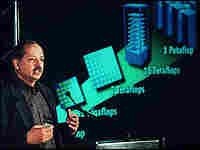 Plans for IBM's Blue Gene supercomputer were announced at a December 1999 news conference in New York. Here, Ambuj Goyal, then vice president of computer science at IBM research, stands in front of a graphic that shows the steps to a quadrillion operations per second — at the time, about two million times more powerful than any desktop PC. Stan Honda/AFP/Getty Images hide caption 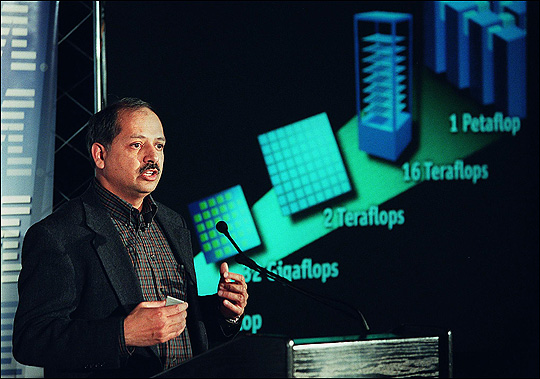 Plans for IBM's Blue Gene supercomputer were announced at a December 1999 news conference in New York. Here, Ambuj Goyal, then vice president of computer science at IBM research, stands in front of a graphic that shows the steps to a quadrillion operations per second — at the time, about two million times more powerful than any desktop PC.

There is a big buzzword in some business circles these days: "open innovation."

The idea is that companies should open themselves up, sharing ideas with the world and getting new ideas from inventors and scientists and regular people outside of the corporate structure.

It's a simple idea, but it's surprisingly radical, at least some of the time.

Take IBM's experiment with Blue Gene. Considered the third-fastest computer in the world, Blue Gene takes up a good-sized room in IBM's research center an hour north of Manhattan.

Paul Koteas is Blue Gene's chief engineer. He says there are 20 racks, each containing more than 1,000 computer processors. IBM has figured out how to create an efficient, superfast network connecting all these processors.

So they must make a fortune off of Blue Gene. Right?

Actually, it's a non-profit center.

"We open it up, essentially to the world, for people to submit what they'd like to do with Blue Gene," Koteas says. "And we pick the hardest problems."

Researchers from outside IBM use this supercomputer to create absurdly complex computer models. One group studies how the influenza virus mutates. Another looks at everything that happens to a gas turbine engine as it heats up.

So, why would IBM let all these people use this valuable asset for free?

"Because they don't see it as a choice," says Yale University's Yochai Benkler. "They understand the world is becoming too fast, too complex and too networked for any company to have all the answers inside."

Benkler wrote The Wealth of Networks, about how the best innovation doesn't come from inside corporations, but from broad, diffuse networks.

For instance, IBM finds the real value of Blue Gene isn't in renting it out, but rather in letting a community of scientists use it freely to see what they come up with. If something valuable emerges, IBM is perfectly positioned to share in the profits.

Benkler says this open-network, open-source approach to business has come, first, to the computer world. Think of Wikipedia or Linux. But those basic ideas will soon move to older, steel-and-glass companies.

"Will there be a better brake? A better windshield developed on an open source model? Absolutely," Benkler says.

Imagine a network of car fanatics discussing the ideal brake on some Web site. Eventually, they come to a consensus — they collaboratively built perfect brake — and then GM, or, more likely, Toyota offers to build it and put it in their cars.

An open-source car might seem unlikely. But as recently as the early 1990s, IBM was still pretty closed up. It didn't think good ideas could come from the outside.

Todd Basche learned that one very closed industry is the combination-lock business. He invented something called the wordlock, which is simply a combination lock that uses letters instead of numbers. That way, you can remember a word as your code, not some random string of digits.

"So, we took it to several of the likely suspects and nobody got it," Basche says. "They looked at it and said: 'I don't get it.'"

Why should they get it? Two companies make almost all combination locks sold in the United States. They don't need new ideas from outside.

Of course, that's what IBM thought until the personal computer revolution almost killed the company.

Basche says most U.S. companies have not embraced open innovation. They are suspicious of outsiders. If an inventor wants to pitch a new idea to a big company, they first have to sign a form.

"You would be appalled at what that form looks like," Basche says.

The form says that any idea an independent inventor pitches can instantly be used by the big company if it wants to. For no money. That's not open innovation, Basche says, that's theft.

Most independent inventors are terrified of big companies. And the companies are suspicious of inventors.

Basche gave up trying to sell his word lock to any company. He started his own and is now making and distributing them himself.