Accessibility links
NASCAR Shows Signs of Losing Race for Fans NASCAR seems to be losing a bit of speed in the competition for spectators. TV ratings are off and fewer people are flocking to see the stock-car races live. That has some wondering about the future of the sport. 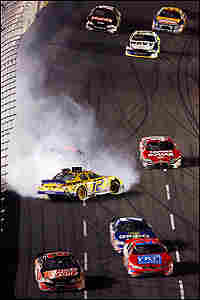 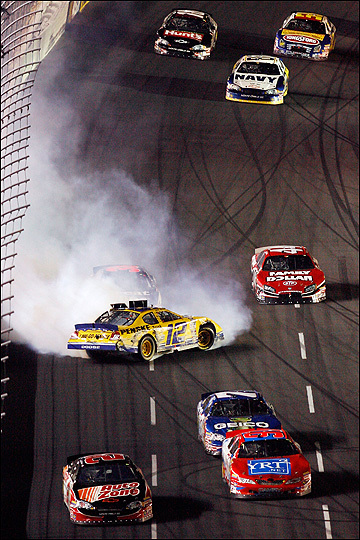 NASCAR is in the middle of its annual homecoming. Sunday, the season's longest stock car race will be held at a track near Charlotte, N.C. — the region long considered NASCAR's home.

But this year, there are questions about the sport's health.

Corporate money has fueled NASCAR's huge growth over the last 15 years. Fan David O'Dell of Durham, N.C., will watch the race Sunday with his wife.

Camping near the track, O'Dell says when his favorite driver, Jimmie Johnson, gets out of his car and thanks his sponsors, he won't necessarily like it, but he'll understand.

"They'll be no end to that, as long as people keep putting money in it to win, they're gonna keep dictating what they can and can't say," O'Dell concedes.

But for all that money has added to the sport, some, like Humpy Wheeler, say it's now taking away from NASCAR's appeal. Wheeler used to be general manager of Charlotte Motor Speedway. Today, it's known as Lowe's Motor Speedway.

"The sponsors need to let up on these guys a little bit. And let 'em be themselves, speak their piece," Wheeler says.

A lot of those veteran NASCAR drivers who were seen as nearly untouchable, aren't racing anymore.

Rusty Wallace and Darrell Waltrip are broadcasters. It's been six years since Dale Earnhardt Sr. died in the Daytona 500. And these days, if a young driver like Ryan Newman gets too hot-headed, he's likely to find himself in hot water.

But lately, fewer people are watching the sport, both on television and in person. Last year, ratings were off by about 10 percent. Some TV audiences this year are nearly one third smaller than they were in 2005.

For promoters, filling the seats they were quick to add a few years ago has become a tough task.

NASCAR is still second to the National Football League in total viewers, thanks in part to massive tracks with huge seating capacities.

But theories as to why NASCAR seems to have hit a plateau include the high gas prices and economic uncertainties that can keep fans from going to races.

Others say the nine-month racing season is too long.

"Are we concerned? We take a look at it," Tharp says. "And we analyze it, we study it, and we do everything we can to make our sports as fan friendly as possible."

Very few think so much is wrong with NASCAR that it won't turn itself around. But reporter Rick Minter, who covers racing for the Atlanta Journal Constitution, something's not right with the sport and he's waiting to see how NASCAR reacts.

"I think this year will be the year that really tells whether NASCAR's got a problem yet or not," Minter says.

If NASCAR is to begin a rally, Charlotte would be a good place to start. And there's reason for optimism. For the first time in six years, track officials say they're close to selling out the facility's 165,000 seats for this weekend's Coca-Cola 600.