Accessibility links
Why The Obama Administration Picked Cairo President Obama will try to reach out to the Muslim world this week through a speech in Cairo. Administration officials are highlighting Egypt's position as a strategic ally of the United States, but one analyst says the choice of location was more a process of elimination. 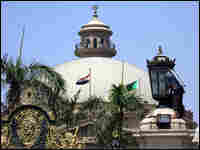 A worker (right) cleans a lamp at Cairo University on Monday. President Obama will deliver a highly anticipated address to the Muslim world there this week. Khaled Desouki/AFP/Getty Images hide caption 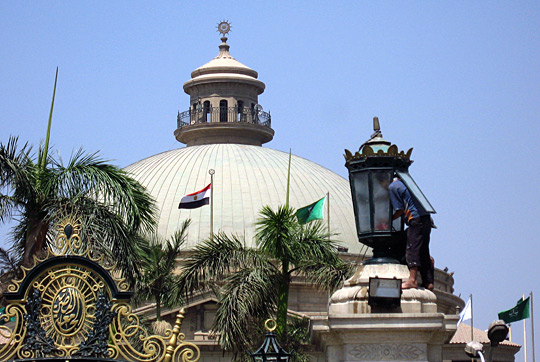 A worker (right) cleans a lamp at Cairo University on Monday. President Obama will deliver a highly anticipated address to the Muslim world there this week. 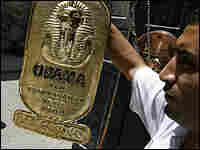 An Egyptian vendor displays a handmade copper plaque reading "Obama, New Tutankhamun of the World" at his shop in the Khan el-Khalili market area in Cairo on Monday. Khaled Desouki/AFP/Getty Images hide caption 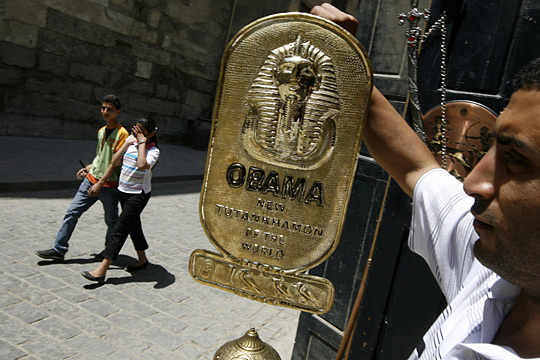 An Egyptian vendor displays a handmade copper plaque reading "Obama, New Tutankhamun of the World" at his shop in the Khan el-Khalili market area in Cairo on Monday.

One of the highlights of President Obama's trip to the Middle East and Europe this week will be a speech he plans to give in Cairo in an attempt to reach out to the Muslim world.

Why Cairo? The answer is simple, says Denis McDonough, deputy national security adviser for strategic communications. "Egypt is a longtime strategic ally of the United States," he says. "It's a key country in the Arab and Muslim world ... with a burgeoning younger population that the president looks very much forward to engaging."

There is no perfect place to give such a speech, however. Obama could have chosen Indonesia, where he spent some of his childhood, or Turkey, where he visited earlier this year.

Jon Alterman, director of the Middle East Program at the Center for Strategic and International Studies, says the Obama administration felt the need to pick an Arab country.

"Arabs are a minority of Muslims, but they have [a] disproportionate voice in Muslim life and Muslim jurisprudence ... so they decided it has to be in an Arab city," he says. "And if you start thinking about Arab cities, there aren't a lot that leap off the page."

Alterman says there was a process of elimination: Morocco, while more democratic than Egypt, is too peripheral; Jordan is too small; and Saudi Arabia would bring other problems, he says. "So, you end up going to Cairo, which has been an influential Arab and Islamic city for centuries."

Still, he adds, "Cairo helps you check boxes, but it creates other problems."

The main problem is that Obama will have to find some way to address democracy and human rights. Michele Dunne, a senior associate at the Carnegie Endowment for International Peace, says the choice of Cairo was "bold and challenging" for the Obama administration.

As for the Egyptian government of Hosni Mubarak, Dunne says it sees Obama's decision to speak from Cairo as a validation of its importance in the region. She argues that the Egyptians have been very concerned recently with Iran's rise to greater regional prominence. And Saudi Arabia and even small Arab countries like Qatar have taken on a more prominent role in diplomacy.

"So," she says, "Egypt is eager to try to recapture its status as the preeminent Arab power, and I think they see President Obama's choice as helping them to do that in some way."

Obama will speak from Cairo University, which Dunne says poses some practical challenges. Cairo is "a huge metropolis," and the campus is in a heavily populated part of the city, she says.

"Moving a presidential motorcade through there is going to be extremely difficult, and I'm sure they are going to have to make some very complicated arrangements to ensure President Obama's safety," Dunne says.

Alterman says security was a factor in the choice of Cairo University for the speech, which will be co-hosted by Al-Azhar University, an ancient seat of Islamic studies. "There was talk of doing it at Al-Azhar itself," he says, "but then the question became, 'Well, if you go into a mosque, you take off your shoes. ... How do you ensure security in huge piles of shoes?'"

Again, Alterman says, the Obama administration chose the venue by process of elimination.

Obama has been promising this speech since the days of his campaign. While Alterman says many in the Arab world are hoping to hear a clear, practical speech — about how to resolve the Arab-Israeli conflict, for instance — administration officials say the speech will be more conceptual, aimed at reframing relations with the Arab and Muslim world.