Accessibility links
Claudia Acuna: Jazz 'At This Moment' Nearly every jazz musician today comes from an institutional program, but Claudia Acuna took an alternate route that started in her native Chile. In a session from WBGO, the jazz vocalist performs the music of a Chilean freedom singer and Cole Porter.

Claudia Acuna: Jazz 'At This Moment'

Claudia Acuna: Jazz 'At This Moment' 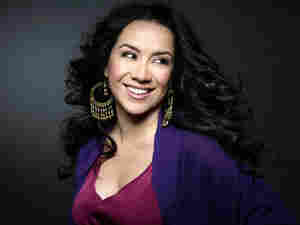 Claudia Acuna was singing jazz before she even knew there was a word for it. courtesy of the artist hide caption

"I grew up without really knowing names or styles," she says. "We used to have an old radio that got signals from other parts of the world — tangos, funk music, big band and trios. I was attracted to this music because it allowed me to improvise. Later, when I met people who were jazz lovers, they said, 'Oh, you sing jazz.' And I started getting more curious about this style that was already in my life, but I didn't really know."

The Move To New York

"He embraced so much the Afro-Cuban music," Acuna says. "When I saw him, I said, if he can embrace all this music, I'm sure I can bring my roots to this music and speak my own story."

She moved to New York to take the full immersion program in jazz language, participating in jam sessions at clubs around the city. You can hear some of Acuna's South American pedigree in this studio session.

Songs For Freedom Singers And Fortresses

She sings "El Cigarrito," a love song from Victor Jara, a freedom singer, poet, playwright and actor who was tortured and killed during the regime of Augusto Pinochet.

"He's one of the most important songwriters in Chile," Acuna says of Jara. "Just because you express yourself in songs or in an artistic way, for some reason, the dictator thought that he was someone dangerous. He was just an artist. They just thought it was best to kill him, but his music and his history just became stronger."

Acuna wrote "Tulum" after a visit to the ancient Mayan fortress built along Mexico's Yucatan Peninsula. She calls it "a song written in honor to a beautiful place in the Yucatan, a magical place that brought me back the magic that I thought I had lost somewhere."

Music For The Moment

"El Cigarrito" and "Tulum" are two songs from Acuna's recent recording, En Este Momento. The band spent four days in a studio documenting how it played the music "at this moment," which is how the title translates.

"That was the energy in the songs that we decided to do," Acuna says. "You always play them differently. They change. This album represents everything without being in any box of, 'This record is about this and that.' It's just a moment."

The newest moment from this session comes from the oldest source material, Cole Porter's "Every Time We Say Goodbye," which Acuna sings in English.

"I love standards," she says. "Even though we just released a record, we're already working on new songs. One night, we were jamming at the Zinc Bar in New York. I got very inspired by some melodies we were singing. Then I brought it to the band, and we all collaborated on a rhythm that the drummer, Yayo Serka, started. This is something a little new that we worked out on this past tour in Asia."

You might hear in Claudia Acuna a kind of confidence that comes only from someone who took the hard way into jazz. The path is rarely easy, but the results sing for themselves.