Accessibility links
Excerpt: 'The Selected Works of T.S. Spivet' Reif Larsen's book is a uniquely constructed novel whose story is enhanced by drawings and separate stories and musings in the margins. 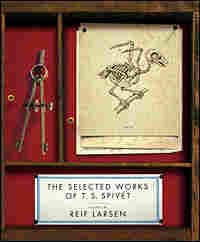 The phone call came late one August afternoon as my older sister Gracie and I sat out on the back porch shucking the sweet corn into the big tin buckets. The buckets were still peppered with little teeth-marks from this past spring, when Verywell, our ranch hound, became depressed and turned to eating metal.

All of my notebooks were color-coded. The blue notebooks that neatly lined the south wall of my room were reserved for "Maps of People Doing Things," as opposed to the green notebooks on the east wall, which contained zoological, geological, and topographical maps, or the red notebooks on the west wall, which was where I mapped out insect anatomy in case my mother, Dr. Clair Linneaker Spivet, ever called upon my services.

I had once tried lining maps on the south wall of my room, but in my excitement to organize, I briefly forgot that this was where the entrance to my room was located, and when Dr. Clair opened the door to announce that dinner was ready, the bookshelf fell on my head.

I sat on my Lewis and Clark carpet, covered in notebooks and shelving. "Am I dead?" I asked, knowing that she would not tell me, even if I was.

"Never let your work trap you into a corner," Dr. Clair said through the door.

Our ranch house was located just north of Divide, Montana, a tiny town you could miss from the highway if you happened to adjust your radio at the wrong moment. Surrounded by the Pioneer Mountains, Divide was nestled in a flat-backed valley sprinkled with sagebrush and half-burnt two-by-fours, a reminder of when people actually used to live here. The railroad came in from the north, the Big Hole River came in from the west, and both left heading south, searching for brighter pastures. Each had its own way of moving through the land and each had its own odor of passage: the railway tracks cut straight ahead, asking no questions of the bedrock through which it sliced, the wrought-iron rails smelling of axle grease and the wooden slats of rancid, licorice-scented shellac. In contrast, the Big Hole River talked with the land as it wound its way through the valley, collecting creeks as it went, quietly taking the path of least resistance. The Big Hole smelled of moss and mud and sage and occasionally huckleberries — if it was the right time of year, though it had not been the right time of year for many years now.

These days the railway did not stop in Divide, and only Union Pacific freight came rumbling through the valley at 6.44 a.m., 11.53 a.m., and 5.15 p.m., give or take a couple minutes, depending on the weather conditions. The boom era of Montana mining towns was long gone; there was no reason for the trains to stop anymore.

Divide once had a saloon.

"The Blue Moon Saloon," my brother Layton and I used to say while we floated in the creek, our noses pointed pompously upward, as if only gentry frequented the establishment, though in retrospect the opposite was more probable: these days, Divide was a town of holdout ranchers, fanatical fishermen, and the occasional Unabomber, not dandy fops with a mind for parlor games.

Layton and I had never been to the Blue Moon, but the idea of what and who might be inside became the basis of many of our fantasies as we floated on our backs. Soon after Layton died, the Blue Moon burned down, but by then, even up in flames, the place was no longer a vesicle of the imagination; it had become just another building burning, and now burnt, in the valley.

If you stood where the old railroad platform used to be, next to the white rusted sign that, when you squinted your eyes in just the right way, still read D I V I D E--from this spot, if you pointed yourself due north, using compass, sun, stars, or intuition, and then walked 4.73 miles, whacking your way through the scrub brush above the river basin and then up into the Douglas fir-covered hills, you would collide with the front gate of our little ranch, the Coppertop, nestled on an isolated plateau at 5,343 feet, a stone's throw south of the continental divide, from which the town had gleaned its name.

The divide, oh, the divide: I had grown up with this great border at my back, and its quiet, unerring existence had penetrated deep into my bones and brain. The divide was a massive, sprawling boundary not determined by politics, religion, or war but by tectonics, granite, and gravity. How remarkable that no U.S. president had signed this border into law, and yet its delineation had affected the expansion and formation of America's frontier in a million untold ways. This jagged sentinel sliced the nation's watersheds into east and west, the Atlantic and the Pacific--and out west, water was gold, and where the water went, people followed. The raindrops blown a couple of miles west of our ranch would land in creeks that percolated through the Columbia River system into the Pacific, whereas the water in Feely Creek, our creek, was blessed with the task of traveling a thousand miles more, all the way down to the bayous of Louisiana before spilling through the loamy delta into the Gulf of Mexico.

Layton and I used to climb Bald Man's Gap, the exact apex of the divide--he taking care not to spill the glass of water clutched in between his hands, while I minded a rudimentary pinhole camera that I had fashioned from a shoe box. I would take pictures of him pouring water on either side of the hill, running back and forth, yelling "Hello Portland!" alternately with "Hello N'Awlins!" in his best Creole accent. As much as I worked the dials on the side of the box, the pictures never quite captured the heroism of Layton in that moment.

Layton once said at the dinner table after one of our expeditions, "We can learn a lot from a river, can't we, Dad?" And though Father didn't say anything at the time, you could see in the way he ate the rest of his mash that he appreciated that kind of thinking in his son. Father loved Layton as much as anything in this life.

Out on the porch, Gracie shucked and I mapped. The tickers and clickers spattered the fields of our ranch with their droning orchestration, and August swam all around us--hot, thick, and remarkable. Montana glowed in the summertime. Just last week, I had watched the slow, quiet spill of daybreak over the soft, fir-topped spine of the Pioneers. I had stayed up all night drafting a flip book that superimposed an ancient map of the body from the Chin Dynasty on a triptych of the Navajo, Shoshone, and Cheyenne understandings of a person's inner workings.

At the nip of daybreak, I walked out onto the back porch barefoot and delirious. Even in my sleepless state, I sensed the private magic of the moment, and so I gripped my pinky behind my back until the sun finally cleared the Pioneers and flashed its unknowable face at me.

I sat down on the steps of the porch, bewildered, and those crafty wooden boards took this opportunity to engage me in conversation:

It's just you and me, buster--let's sing a quiet song together, the porch said.

You are not a ranch boy.

You do not whistle cowpuncher tunes or spit into tin cans.

I'm not good at spitting, I said. I make maps.

Maps? the porch asked. What is there to map? Spit into tin cans. Ride the high country. Take her easy.

There is plenty to map. I do not have time to take her easy. I do not even know what that really means.

You are not a ranch boy. You are a fool.

You are lonely, the porch said.

Then take a seat, and whistle a lonely cowpuncher tune.

I am not finished with my maps. There is more to map.

Excerpted from The Selected Works of T.S. Spivet by Reif Larsen. Reprinted by arrangement with The Penguin Press, a member of Penguin Group (USA), Inc. Copyright (c) Reif Larsen, 2009. 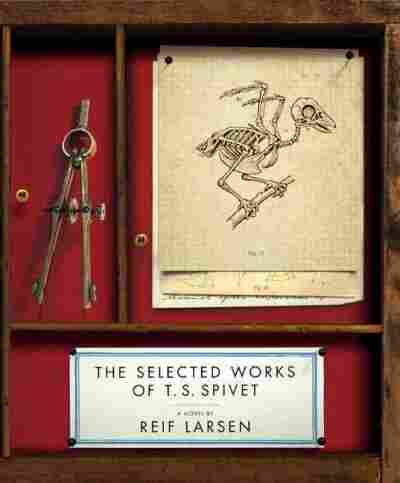