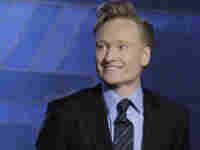 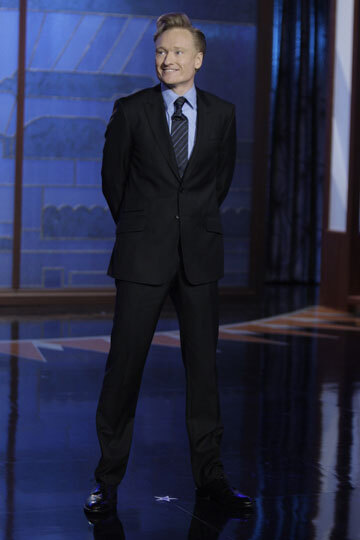 Conan O'Brien is the fifth host to take the stage of NBC's Tonight Show.

Outside of the reference to General Motors, Conan O'Brien didn't do any topical humor in his first monologue as host of NBC's Tonight Show. He didn't need to. He was the big story of the day. After 16 years as the host of the 12:30 a.m. ET Late Night show, as the replacement for David Letterman, Conan was now moving to 11:30, and from New York to Los Angeles, to replace Jay Leno.

As TV goes, this was a very orderly transition of power. Conan had appeared as a guest on Jay's last show, and Conan expressed thanks to Jay last night on his first show. Conan also brought along drummer Max Weinberg and company — who now get to call themselves "The Tonight Show Band" — and rehired Andy Richter, who had been Conan's Late Night sidekick when he started back in 1993. Andy is an announcer now, but their relationship is the same: They still laugh the hardest at offhand remarks the studio audience doesn't seem to catch.

So how was the first installment of this new Tonight Show? You can judge only so much from an initial outing, but first impressions do count, and they often turn out to be accurate. When Jimmy Fallon took over for Conan earlier this year, the first edition of his Late Night suggested that he was smart for hiring The Roots as his house band, but barely competent at delivering a monologue and interviewing a guest. More than a month later, that's still true. Fallon has held most of the Late Night audience, but though I keep returning, he hasn't held my interest.

Conan's another matter. A lot of discussion, before last night, centered on how much of his Late Night attitude and humor he could bring with him. For example, will Triumph the Insult Comic Dog work an hour earlier? Of course he will. Triumph is one of the funniest weapons in Conan's arsenal. But Conan has to woo the old Tonight Show viewers first, the ones who found Jay's nonthreatening humor preferable to Letterman's more caustic style over at CBS. That's why likable Will Ferrell was last night's only sit-down guest, and why tonight's guest is the superlikable Tom Hanks. C'mon, folks, Conan is saying: If these guys like me, how bad can I be?

The Conan who was on his best behavior last night wasn't that memorable, but he wasn't trying to be. He was establishing a new baseline — new set, new logistics, slightly new behavior — like a kid finally moving up to the adult table at Thanksgiving. The set is a lot classier, and, respecting the Tonight Show tradition, Conan has started out that way too.

But not completely — because another part of the Tonight Show tradition, going all the way back to original host Steve Allen, is what Conan does best: It's getting outside the studio, interacting with real people, and improvising. And now that Conan is playing in a new sandbox, right on the Universal lot, some really funny material is only a tour-guide tram away.

Here he is, commandeering a Universal tram from a tour guide named Drew, and serving as an unofficial co-host. Drew points out various studio attractions or landmarks, and he tries to play it straight. But when Conan sees the flash floods from Earthquake, he gets very emotional. And when he sees a Norman Bates look-alike stuffing a corpse into a car trunk outside the house from Psycho, he gets very ... critical.

My guess is that Conan will do fine, in the short run, and hold the audience he has inherited — just as Fallon has in Conan's old time slot. But that's the short run. Fortunes in late-night TV — and believe me, fortunes are at stake here, because The Tonight Show is one of NBC's biggest profit centers — are decided not by short sprints, but by grueling marathons.

When Letterman, upset at not getting The Tonight Show when Johnny Carson retired, moved to CBS, he won the late-night battle for a while. Then Leno did that Hugh Grant interview about the hooker, opened with one perfectly phrased question — "What the hell were you THINKING?" — and has led in late-night ever since.

Now that it's Conan vs. Dave in a head-to-head battle, there may be an incremental shift. The big question, though, is what happens this fall, when Jay returns to NBC in a nightly prime-time slot. How will that affect network TV in general, and The Tonight Show in particular? If Jay succeeds, other networks will copy his success, and scripted dramas and comedies on broadcast TV will all but vanish. If Jay fails, he may take the ratings for NBC's local news affiliates, and the ratings for The Tonight Show, down with him.

Either way, when you think about it, there's no happy ending. The only good news is that The Tonight Show, for now, is in very capable hands.