Accessibility links
Coming Distractions: Summer Film Highlights The summer movie season is about to move beyond ogres, web-slingers and pirates to wizards, wiseacres and Willis. Wedged in between, there's some serious fare, too. Bob Mondello offers a lightning roundup. 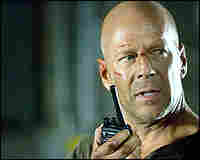 Bruce Willis is back for another wild ride in Live Free or Die Hard. 20th Century Fox hide caption 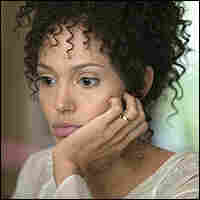 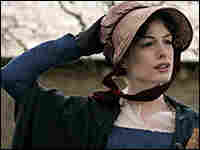 Remy, a rodent with ambitions, seeks to become a chef in Ratatouille. Disney/Pixar hide caption

Don Cheadle grabs the microphone in Talk to Me, a film set in the turbulent '60s. Focus Features hide caption

Homer and crew put the "fun" in dysfunctional family. Now they're finally on their way to the big screen in The Simpsons Movie. 20th Century Fox hide caption

With ogres, web-slingers, and pirates already battling for supremacy at the cineplex, the summer movie season has clearly arrived. And of the 85 pictures on the way, only 72 are sequels.

Okay, that's not quite true, but it does feel that way.

That would be Transformers, that Saturday-morning toy commercial masquerading as a cartoon, now "transformed" into an enormous-looking live-action flick with digital effects.

Then there's Harry Potter and the Order of the Phoenix, which as we all know, is almost exclusively magic. Harry and his wizard buddies, back for the fifth time in seven years, will not be alone in catering to a young crowd this summer. There's also Surf's Up, about penguins who have a surfing contest in Hawaii, and Nancy Drew, Underdog and Bratz. (Those are actually three different movies, though it does sort of sound like just one high-concept one.)

And speaking of high-concept, they don't get much higher than the one for the new Pixar picture, Ratatouille, about a French rat, with a taste for the high life, who dreams of someday being a chef.

Kids of course, aren't the only ones who like to laugh in the summer. There are plenty of comedies for adults. Some of them — say, Oceans 13, sound decidedly familiar.

Also in the realm of the familiar, is Steve Carell in a sequel to the Jim Carey vehicle Bruce Almighty. Carell is Evan Almighty — which is apparently the most expensive comedy in Hollywood history. And with Carell occupied there, the team that made The 40-Year-Old Virgin turned to Seth Rogan for their new comedy, about a slacker who has a one-night fling with an up-and-coming TV star. She gets — in the words of the title — Knocked Up.

Romantic comedy for the indie crowd — folks who liked Napoleon Dynamite, let's say — sounds a little different, in a revenge-comedy called Eagle vs. Shark. a dweeb-falls-for-geek romance from New Zealand.

And how about a relationship comedy in which there's just the appearance of romance, as Adam Sandler and Kevin James play heterosexual firemen who try to qualify for benefits by posing as husband and husband in I Now Pronounce You Chuck and Larry.

Opening the same day is Hairspray, starring John Travolta in a dress, so that should be quite a weekend. Hairspray is based on a John Waters comedy, turned stage-musical, now turned movie-musical.

Hairspray actually deals with a serious topic — racial segregation during the 1960s. And so does Talk to Me, a film about a popular African-American deejay of that period in Washington, D.C. — a guy named Petey Greene, played by Don Cheadle. Though the film is sometimes raucous, when riots erupted after the Martin Luther King assassination, Greene had the influence to help calm the streets of Washington.

Another troubled but popular man of the people, especially for fans of Latin music who want to hark back to that era, was the King of Salsa, Hector Lavoe, who's played by Marc Antony in El Cantante (The Singer).

Bio-pics are almost alarmingly common this summer. Besides Hector Lavoe and Petey Greene, we'll get the life story of a French playwright in Moliere; a French singer (Edith Piaf) in La Vie en Rose; a Spanish painter (Francisco Goya) in Goya's Ghosts; and English novelist Jane Austen in Becoming Jane, a picture filled with sense and sensibility, pride and prejudice and lots of invented biographical details.

These are all biography as entertainment, but real life will also enter the cineplex in a more somber way in the true story of Mariane Pearl, whose journalist husband was killed in 2002, by terrorists in Pakistan. Angelina Jolie plays Pearl, and both she and the picture, A Mighty Heart, were well received last week at the Cannes Film Festival. So was Michael Moore, reliably provocative with a new documentary called Sicko that deals with Americans who don't have, or can't get, health insurance.

And then there's the story of a brave, heroic man who would do anything to ensure the safety of those he loves. We're talking Homer, in The Simpsons Movie — a voice of reason in Hollywood's silly season.