Accessibility links
Excerpt: 'The Four Corners of the Sky' Prepare to be enchanted by a masterful writer who knows how to tell a story. Michael Malone's skills derive partly from his work writing for a popular daytime soap and partly from his affection for good literature. 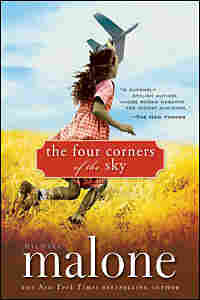 In small towns between the North Carolina Piedmont and the coast the best scenery is often in the sky. On flat sweeps of red clay and scrub pine the days move monotonously, safely, but above, in the blink of an eye, dangerous clouds can boil out of all four corners of the sky and do away with the sun so fast that, in the sudden quiet, birds fly shrieking to shelter. The flat slow land starts to shiver and anything can happen.

In such a storm, on Annie Peregrine's seventh birthday, her father gave her the airplane and minutes later drove out of her life. When thunder scared her awake she found herself in their convertible, parked atop a hill near a barn. Off in the distance rose a large white house with a wide white porch. A white pebble road curved away behind the car, unreeling like ribbon on a spool. Annie looked past two rows of rounded black trees to where fields of yellow wheat spilled to the edge of the sky. Her father and she must have arrived at Pilgrim's Rest, the Peregrine family house in Emerald, North Carolina, toward which they'd been driving all day.

Sliding from their car, she saw him, slender and fast-moving, his white shirt shimmery, as he ran toward her out of the barn and across the dusky yard.

"Annie!" Reaching her, her father dropped to his knees and hugged her so fiercely that her heart sped. "I'm in trouble. I've got to leave you here a little while with Aunt Sam and Clark. Okay?"

She couldn't speak, could only shake her head. How often had he told her that the house where he had grown up, that Pilgrim's Rest had been for him a pit of snakes, a cage of tigers?

He kept nodding to make her nod too. "Okay? I'll be back. Just hang onto your hat." Pulling a pink baseball cap from his pocket, he snuggled it down onto her head. Colored glass beads spelled ANNIE above its brim; a few beads were missing, breaks in the letters.

Across the driveway a tall woman with short thick hair banged open the large doors of the barn. She called out to Annie's father. "Jack? Jack! Jack! Jack!"

Annie's father turned her around to face the woman but kept talking with that nodding intensity that always meant they would need to move fast. "See my sister Sam over there? I told you how nice she is." The sound of sharp thunder flung the child back into the man's arms. "So's Clark. They'll take care of you. I'll call you. Remember, you're a flyer." He yanked her small hard blue suitcase out of the convertible, dropping it onto the gravel beside her. "Give Sam the cash."

"Stop it. Where are you going!"

"Annie, I know. It's rotten." A drop of rain fell on his face like a fat fake tear. Drops splattered on the suitcase's shiny clasps. "Go look in the barn. There's a present for you. 'Sorry, no silver cup.' " She kicked him as hard as she could. And then she kicked over the blue suitcase. "I want to go with you," she said. "You!" But before she could stop him, her father had run to their car and was driving away.

She raced after the Mustang, down the pebble road between the dark rows of large oak trees. It was hard to make her voice work loudly but finally it flamed up her throat and she could shout at him to come back. She was already crying, already knowing she couldn't run fast enough.

Annie echoed her, hoping it would help. "Dad! Dad!"

The convertible braked to a skidding stop, her father twisting around in the seat to call out, "Your birthday present's in the barn, go look in the barn! Annie! Don't forget. You're a flyer!"

She screamed as loudly as she could, "You stop!"

The wind caught his scarf as he sped off; it flew into the air behind him. Then he was gone and the green silk scarf lay coiled near her feet. She ground it into the pebbled road with her small leather cowboy boots; they were as green as the scarf and stitched with lariats. She had wanted these boots so badly that only a week ago her father had turned their car around, drove them back fifty miles to some small town in the middle of a flat state; he took her to the store where she'd seen the boots in the window and he bought them for her. "Never wait to say what you want," he told her. "It's no fun to go back. And sometimes you can't."

But now she'd said what she wanted and he'd left her anyhow. Dust and rain stung Annie's eyes shut and the world turned black. The tall woman's voice was calling again. "Annie! Annie!"

Furious, the child flung herself into the gully beside the road, tumbling down a tangle of vines and underbrush; she lay there in the rain, hiding from the woman Sam until her voice, solicitous and worried, passed by, still shouting, "Annie! Annie!"

After a while, the woman's voice faded and there were no sounds but the hard wind and rain. Annie decided to walk along the road in the direction her father had gone. Maybe he would stop for gas or food and she would find him again.

But suddenly her pink baseball cap blew off, whisking over the bank. She chased the cap onto a path that wound up to a hilltop, where it caught against a pair of closed white wooden gates. On a post beside these gates there hung a wood sign with painted letters. It said, "Pilgrim's Rest, 1859." And above that, "Peregrines" was carved in the wings of a wood hawk flying. She undid the heavy iron latch of the gates and pushed her way through the opening.

In the yard, gusty stinging rain and wind slapped at her, shoving her against the front of the barn. Its immense gray weathered doors blew suddenly apart as if she had knocked on them in a fairy tale and some invisible sorcerer with power over the elements had ordered the wind to sweep her inside.

The barn was an enormous dark empty space, with high rafters and a sweet strong smell. Outside, the storm was close and noisy, but the barn was quiet. Annie walked into the middle of the shadowy space. There, alone, sat an old airplane. It was a fixed-wing single-engine plane, a Piper Warrior painted cherry red with blazing yellow stripes and a silver propeller on its black nose. The door to its cockpit was swung open. From the seat the beam of a large red battery lantern was shining on the plane so clearly she could see the fresh footprints of her father's shoes in the thick dust on the wing. She ran over to the plane, crawled behind its wheel cap and beat her head against her knees in a shout of grief so hopeless that the noise she made scared her. She cried until she heard an unfamiliar man's voice call her name, "Annie." Quickly she bit at the cloth on her knee, quiet, listening. The voice moved away.

Above her, beneath the airplane's low curved wing, she could make out spiraling green letters curled like a dragon's tail, spelling the words, King of the Sky.

While they'd traveled on highways together, her father had told her about his old airplane, the King, how he and she could have been moving much faster back and forth across America if they'd only had the use of the King of the Sky, how the plane was "just sitting there in the barn" at his childhood home Pilgrim's Rest, in a town called Emerald. He'd told her that someday they'd go get the King and they'd fly it all over the country. Annie had never much believed such a plane existed, any more than the lost treasures and magic elixirs and prison tunnels he'd also described.

Now she hugged the King of the Sky's wheel with both arms and legs. "I'm a flyer," she said. "A flyer. A flyer."

Excerpted from The Four Corners of the Sky. Copyright 2009 by Michael Malone. Excerpted by permission of Sourcebooks Landmark. No part of this excerpt may be reproduced or reprinted without permission in writing from the publisher. 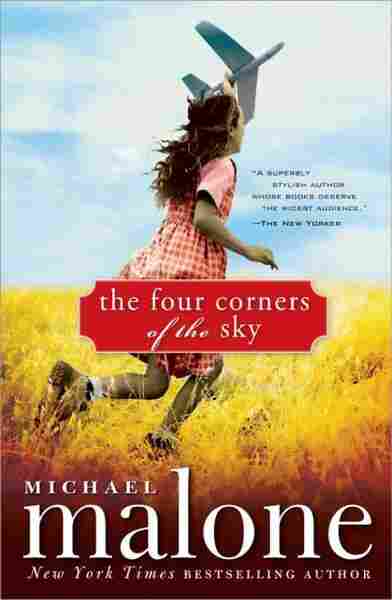 The Four Corners of the Sky

Title
The Four Corners of the Sky
Author
Michael Malone