Accessibility links
The Corrido Of Esteban 'Steve' Jordan, World's Best Accordionist At 70, Esteban "Steve" Jordan is a legend of Tejano music -- an illiterate, eye-patch-wearing, hard-knock prodigy of the button accordion. Even as liver cancer encroaches, he's still preparing to issue nine CDs' worth of unreleased material. 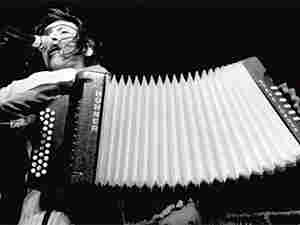 Even in failing health, Esteban "Steve" Jordan is planning to issue nine previously unreleased albums, on which he plays all the instruments. Courtesy of the artist hide caption

It's a warm night under a full moon on the west side of San Antonio. On this night, all the bands at the annual Tejano Conjunto Festival are paying tribute to Steve Jordan.

From the door of an RV steps the gaunt accordionist. At 70, he's still the peacock: He wears a shiny gold shirt with puffy sleeves, a purple vest, purple bell-bottoms, black boots and his iconic black eye patch.

His fans are fanatics. One longtime follower has a picture of El Parche -- Jordan's nickname, owing to the eye patch -- tattooed on his bicep.

"I've been listening to Steve since probably 1980," says Joe Rodriguez, a fan. "There hasn't been any other fascinating musician that can defy gravity, actually, and can bend time and bend sound."

Welcome to the world of Steve Jordan: where time and sound bend, and accordions can fly.

In the world of Mexican-American music, Jordan is a legend: He's done things on the button accordion that had never been done before, or in some cases since. Though his health is now failing, the 70-year-old is still performing -- and set to embark on a new phase of his career.

The Rise Of Jordan

Jordan was a musical child prodigy who never went to school and, to this day, cannot read or write. Nearly blinded at birth in both eyes by a clumsy midwife, he picked up the accordion for the first time at a migrant labor camp in Texas when he was 7.

Over a long, turbulent career drenched in booze and drugs, he played everything he heard, and learned every instrument he got his hands on. He was even good enough to play guitar with Willie Bobo's Latin jazz band in 1964. It is said that he's his own genre.

"What Steve Jordan did was, he electrified the accordion," says Sunny Sauceda, a rising star on the squeezebox. "He used pedals, he brought in jazz influences to the accordion playing. He brought in the effects that had never been done on the accordion -- to this day, nobody does it."

Those effects -- like phase shifters, fuzzboxes and echoplexes -- gave rise to the label that Jordan hates to this day: "the Jimi Hendrix of the accordion."

The Man, The Myth

Jordan's music and his persona are inseparable.

But Tejeda also says Jordan is getting frail, and looks like he's in pain.

Jordan's liver is diseased with cirrhosis and cancer. He underwent chemotherapy last year. But Jordan says he feels good these days. And he's finally begun granting interviews -- he used to be notoriously elusive. Though he's ailing, he's still got the old attitude.

"Right now, I'm so far advanced that nobody can catch up to me," Jordan says. "Nobody, I mean, that includes nobody. Do you understand what I'm saying?"

Esteban Jordan grew up the youngest of 15 siblings in a family of southern Texas farmworkers. They picked sugar beets in Colorado, cotton in Arizona, figs in California. But Jordan couldn't work in the fields.

"I couldn't see a damn thing," he says. "I was a young kiddie. And I was turned loose at that age: Go ahead on, find yourself something to do."

Jordan says he started making a living as a musician when he was 7. By the late 1980s, it looked like his career was finally taking off. He played the Berlin Jazz Festival, had a Grammy-nominated album and played the soundtrack for Cheech Marin's Born in East L.A. Hohner even produced the "Steve Jordan Tex-Mex Rockordion."

Back then, some even started calling him "the world's best accordionist."

Jordan should have ridden that wave 20 years ago. He should be set now, sitting back, enjoying the fruits of his international renown. (He has rabid fans in Germany and Japan.) But he says he isn't seeing any royalty payments.

"Nada," he says. "Not a half a penny. They've been taking advantage of the handicapped."

He isn't too happy about it, either.

"Of course I'm bitter," Jordan says. "Everybody's living in Oceanside, and here I am living over here, a poor little dude."

He speaks from the living room of his rundown rental house. The linoleum is cracked, and two dogs mill about a bare front yard.

But Jordan has a plan to finally take charge of his music. He says he has nine CDs' worth of unreleased material in which he plays and overdubs every instrument. He's mixing it at his house, which he shares with his two sons, Esteban III and Richard.

"He did it all himself: He recorded the bass, the guitar, the violins, cellos," Richard Jordan says. "People ask me, man, they call us every day, 'Hey, man, when can we get the record,' blah, blah, blah. They just waitin' like a shot in the arm, they're waitin' for it."

The backroom studio is crammed with all the equipment they need to mix and produce albums on their own. The first release will be titled Carta Espiritual, or "Letter to God." Which is quite different from earlier compositions like "Piedrecita," or "The Little Rock" -- a paean to cocaine.

But you won't hear a sample of it here. Jordan is famously paranoid about people ripping off his music.

"I'll give you a taste of it, but not in there," he says, pointing to the microphone. "You gotta understand that. I don't want it here."

He taps the microphone suspiciously. When he's sure the recorder is turned off, he plays some of his new material; it's vintage Steve Jordan. He says the first CD on his new label will be available at estebanjordan.com later this summer.

For now, if you want to hear the essential Steve Jordan, you can still go to San Antonio, to a tiny club called Salute on North St. Mary's Street. He and his sons still play every Friday night under the name River Jordan.

You'll hear one of the best accordion players in the world.