Accessibility links
In Hollywood, Too Many Extras For many in Hollywood, being an extra has always been a good way to make a little extra cash — some even make a living out of it. But unemployed locals have taken notice, and lines at Hollywood agencies that cast extras are longer than ever. 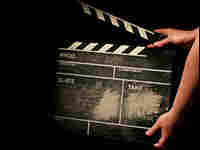 At Hollywood's Central Casting, people can register as an extra by paying a $25 fee. iStockphoto.com hide caption

Since Hollywood began, movie extras have fleshed out reality on screen.

These "background" performers don't speak on camera, and they are forbidden to talk to the director or the stars. But some make a pretty good living just by staying in the background.

Unemployed locals have noticed. The lines are longer than ever at Hollywood's Central Casting, where anyone can register as an extra. And for some, it's the chance to finally fulfill a lifelong dream.

In an industrial park in Burbank, Calif., at least 100 people are standing in line — some for hours — as aspiring extras do every Monday, Wednesday and Friday.

They won't audition. They won't pull out their head shots. They'll just pay their $25 registration fee, and they're an extra.

"This is the only job that all you need is a Social Security number and a pulse," says veteran extra Alan Perlestein.

Perlestein is in line next to Keyonna Patterson, who is signing up for the first time. Seven months ago, she moved from Indianapolis to Los Angeles to be an actress.

"This is kind of like a stepping stone, and I've heard a lot about Central Casting," Patterson says. "I've heard it was great. So I might as well get in there and try it."

Patterson does not want to be an extra forever. She wants a speaking part in an A-list film soon. But for now she'll take this job, where she brings her own costume and makes just $64 a day.

Extra work isn't only about the money. But lately, extra cash has been on the minds of newcomers.

"A lot of people are getting laid off," says Jennifer Bender, vice president at Central Casting. "So we have quite a variety of people coming in looking for ways to make extra money, and it's a good way to supplement their income until they can figure out what to do with their next career."