Accessibility links
Locals Wary Of U.S.-Afghan Patrol Program U.S. forces and the Afghan government are trying to create a neighborhood watch program in one of the country's most restive areas. Many believe the patrols are vital to securing Afghanistan. One of their most pressing tasks is to turn public opinion around inside the Taliban haven. 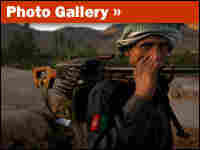 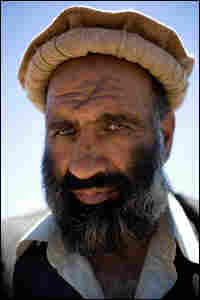 Bearing a fresh scar on his forehead, Tor Gol stands in the courtyard of the Nerkh District Center in Afghanistan's volatile Wardak province. The revered former mujahedeen commander who fought against the Soviets when they occupied the country was responsible for recruiting nearly all of the Afghan Public Protection Force Guardians from the district. hide caption 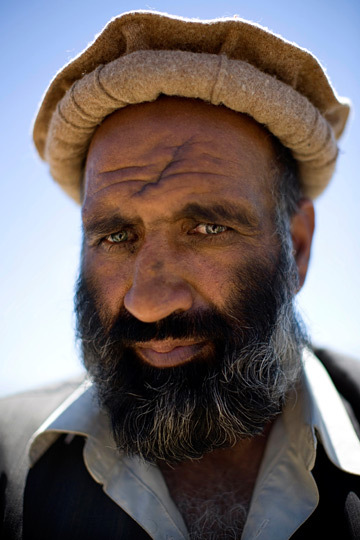 Bearing a fresh scar on his forehead, Tor Gol stands in the courtyard of the Nerkh District Center in Afghanistan's volatile Wardak province. The revered former mujahedeen commander who fought against the Soviets when they occupied the country was responsible for recruiting nearly all of the Afghan Public Protection Force Guardians from the district.

A villager expresses concern over the location of a new Afghan Public Protection Force checkpoint in the village of Khan Ezzat in Nerkh district. Some people in the community believe the checkpoint will bring trouble from the Taliban instead of security. Holly Pickett/Atlas Press for NPR hide caption 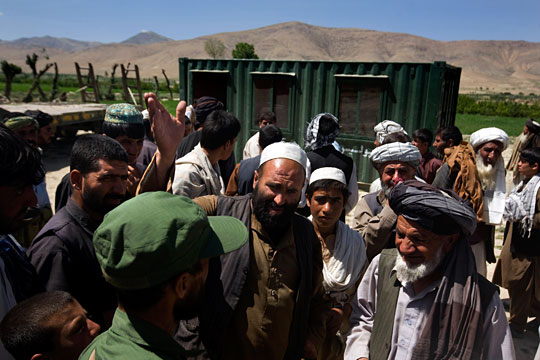 A villager expresses concern over the location of a new Afghan Public Protection Force checkpoint in the village of Khan Ezzat in Nerkh district. Some people in the community believe the checkpoint will bring trouble from the Taliban instead of security.

Part 1 Of The Series

But looks can be deceiving in this district in Wardak province. Gunbattles are common in the area, and on Monday, four U.S. soldiers were killed and five others wounded by roadside bombs.

In this dangerous enclave, a U.S. Special Forces team and the Afghan government are trying to create a neighborhood watch program that many officials say is vital to securing Afghanistan. One of the program's most pressing tasks is to turn public opinion around inside this Taliban haven, where it's hard to tell farmers from militants — they all glare at the Green Berets as they rumble past in armored vehicles.

On a recent day, the Green Berets rev up on energy drinks and the Ted Nugent anthem "Free for All" as they roll into Nerkh on a narrow, rocky road.

They have come to inspect several new checkpoints and meet with local villagers to try and get them to partner with the Afghan government to drive militants out of their valleys.

But in this district, where "Death to America" is spray-painted in Dari on mud walls, they are more likely to run into militants who prefer gunfights to conversation.

A radio carried by a Special Forces interpreter and used to monitor Taliban transmissions crackles with chatter to reveal just how close the militants are.

The Afghan interpreter taunts the Taliban on the radio. He wants to rattle the militants, to let them know Afghan and American forces are present.

American troops already have driven many insurgents out of this region to create an opening for the new Afghan Public Protection Force to move in.

Local villagers make up the force, which is being established in Nerkh and across Wardak province. They are selected by their leaders and are given three weeks of training and AK-47s to defend their homes and families.

These so-called Guardians also have radios and cell phones to call for American and Afghan reinforcements when needed.

But in Nerkh, it's proving hard for the American team to find recruits.

"They seem pretty distrustful and pretty isolationist when it comes to anyone trying to help them, whether it's us or insurgent forces who come through the village," says the team's commander, "Johnny," who can't give his name for security reasons.

"They just kind of want to be left alone, so our challenge is trying to get them to realize that this is their program. They have a lot of buy-in to it, and the more they put into it, the more they are going to gain," he says.

He takes his team to a village called Karimdad. The Green Berets recently set up a checkpoint here, not far from where three Guardians were killed and three more wounded in a roadside bombing last month.

Members of the elite force known as the Afghan Civil Order Police man the checkpoint because there are still no Guardians in Karimdad.

Johnny's deputy, "Joe," walks up a hill to speak with the few male villagers standing outside their front doors. He explains that he is recruiting "fit young men who are willing to protect their families and their villages from the insurgents."

As an Afghan colleague translates, the villagers stare silently at the tall American with red hair. Joe tries another approach.

"Once we can bring some stability to this area, we can improve the roads, improve the schools, improve your farmland," he tells them.

They nod and grunt at the translation, but still no one volunteers. Joe tries again.

"So we're asking for your help," he says.

The villagers balk. They complain that the policemen at the new checkpoint bully them.

Gol Rahim, a farmer, says they are being kept from planting and watering their fields and moving around their village at night.

"We know the enemy comes here, but we don't know who he is. The police give us a hard time because they think we are involved," Rahim says.

Joe tells them that wouldn't happen if villagers formed a unit of the Public Protection Force.

"If they are here instead of us being here, they can tell the difference between the good guys and the bad guys," Joe says.

The difficult task of distinguishing friends from enemies becomes clear a short while later. The Afghan police officers accompanying the American team get a tip that roadside bombs have been set ahead of them.

The Green Berets decide to come back the next day to clear the road. But the Afghan police officers who were supposed to accompany them never show up.

So the heavily armed American team fans out across orchards in search of telltale wires, metal and plastic that might lead them to the explosives.

No bombs are found. But several men darting through another orchard where militants are known to hide get the team's attention.

Gunners prepare to fire their .50-caliber weapons in the air as the Green Berets storm the orchard. But the suspects don't stop.

The Americans catch eight men. They tell the team they are farmers. After answering a few questions, they are released.

Johnny says that even when his men don't find bombs or militants, the clearing operations send an important message.

"We know it's an historic ambush site, and we'd had some reports of people setting up on us, getting ready to ambush us. And it deters the enemy a little bit and also lets them know we are actively out there watching for them," he says.

'We Should Be On The Front Lines'

In another part of Nerkh, newly hired Afghan Guardians are also looking out for the Taliban. They are loyal to Tor Gol, a revered former mujahedeen commander who fought against the Soviets when they occupied Afghanistan.

At the local district center, Tor Gol walks around on crutches with a fresh scar on his forehead. The injuries came from a roadside bomb attack that killed three of his men last month in nearby Karimdad.

But Tor Gol says the attack won't stop him from being a Guardian.

"Our foreign guests are here working on our behalf, so why shouldn't we? We should be on the front lines, not them. This is our area," he says.

Yet students and teachers at a girls school in Tor Gol's valley balk at having a Guardian checkpoint situated near their school.

Teachers Diwa and Hamida argue with Johnny, saying that parents won't let their daughters come to school anymore if the checkpoint goes up. They say it doesn't matter if the Guardians are from their clan: They fear the checkpoint will make them a Taliban target.