Accessibility links
Buying The Farm: A Good Bet For Rural Retirees People who have invested in Midwest farmland in this recession, instead of 401(k)s, may have made a wise choice, according to one economist. Dan and Lorna Wilson of Paullina, Iowa, are counting on their 640 acres to fund their retirement. 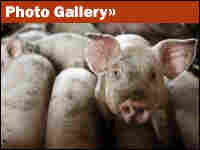 A Day On The Wilson Farm
John Poole/NPR 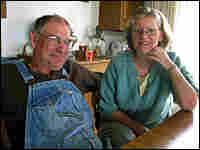 Dan and Lorna Wilson invested in their hog, corn and soybean farm in Paullina, Iowa. The value of their land now gives them a good cushion for retirement despite the economic recession. Howard Berkes/NPR hide caption 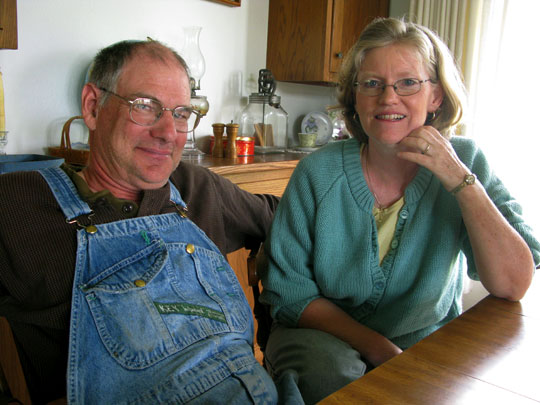 Dan and Lorna Wilson invested in their hog, corn and soybean farm in Paullina, Iowa. The value of their land now gives them a good cushion for retirement despite the economic recession.

Wilson reaches for food for the hogs, while talking on the phone. John Poole/NPR hide caption 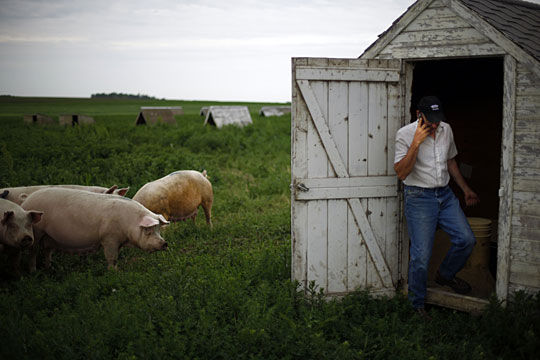 Wilson reaches for food for the hogs, while talking on the phone.

Our weeklong series on All Things Considered began on June 1 and includes: 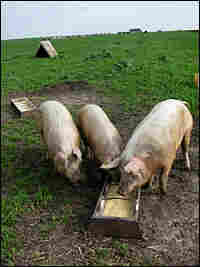 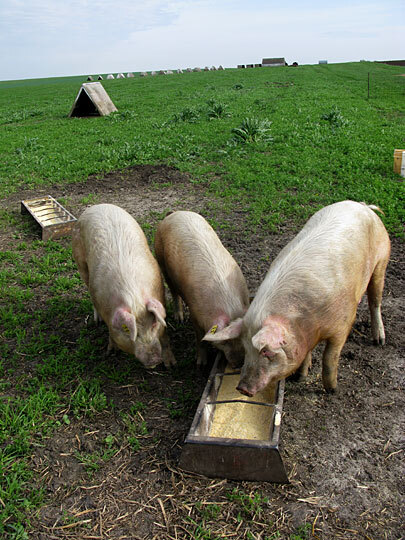 Pregnant sows dig into a breakfast of ground corn, seed and nutrients on the Wilsons' organic hog farm.

When the economy suffers, the nation's farmers also suffer — including those close to retirement. At least, that's been the pattern in the past. But in the current recession, those who invested in farmland — and not 401(k) retirement accounts — made good bets for retirement.

"The thing about farmland [is] it's still producing income," says Dan Wilson, 57, who raises corn, soybeans, grain and organic hogs on 640 acres in Paullina, Iowa. "As long as it can keep producing a crop and the crop's worth something, [farmland] is a good thing to own."

Crops have been worth plenty in the corn and soybean belt in the Midwest, even with a recent dip in some commodity prices.

"Corn prices, soybean prices, wheat prices — all those have been pretty strong until very recently," says Ernie Goss, an economist at Creighton University in Omaha, Neb.

Goss credits high prices to the production of corn-based ethanol and high demand for other crops. On top of that, a growing number of farmers are hosting wind turbines on their land.

"All that pulled together has been very favorable" for the price of farmland, Goss adds.

Farmland Values On The Rise

Wilson and his wife, Lorna, are counting on their farmland to fund their retirement. They can sell or lease it at premium prices. They're also counting on their two sons to continue to farm crops and raise livestock on some of their land, generating income for everyone.

Sitting at their kitchen table, the Wilsons tick off the farmland statistics that show advantages over a 401(k) invested in stocks. First, Dan notes that "farmland today has doubled in value [over] what it was 10 years ago."

The Wilsons add that the recent high price for land in the area is $9,000 an acre. They also note that land prices have declined a bit lately, but it's nothing like the sharp declines in urban and suburban real estate and homes.

Economist Goss has the statistics to support the Wilsons' anecdotal evidence.

"The price appreciation since 1998 has been very good," Goss says. "We're talking about 15 percent a year [in some states]. And the rest of us, those who have invested in stock ... we're seeing drops of 30 percent to 50 percent."

Good Bet, But Not Foolproof

In Cylinder, Iowa, 69-year-old Linus Solberg takes a break from cultivating an 80-acre field destined for soybeans to recount the advice he heard 40 years ago from a landlord.

"He said, 'Linus, there's only so much land in the world. And instead of putting a lot of money in stocks, you need to just invest it in land,' " Solberg says.

Solberg and his wife, Patty, did precisely that.

"That's our retirement," he says of the 700 acres he both leases to other farmers and continues to farm himself. "The value of the land has just skyrocketed."

The land boom has even attracted nonfarming investors from out of state who have helped push prices even higher, Solberg says.

None of this means farmland is a foolproof investment.

The Wilsons see some risk, especially if the recession persists and deepens.

"Anything that shrinks the organic food market would have an impact on us," Dan Wilson says. "If people have less disposable income, it's much more tempting to buy cheap food."

"That's our reality," adds Lorna Wilson. "If [shoppers] choose not to choose organic, we have no control over that."

Diminished demand for the crops and energy farmland produces will diminish the value of farmland. But, so far it seems that Midwestern farmers who are close to retirement, and who invested in their land, made the right choice.