Accessibility links
An Abandoned Symbol Of Detroit's Better Days Recently destined for demolition, Detroit's Michigan Central Station — one of the city's most historic and distinctive skyline silhouettes — has received a temporary stay of execution. 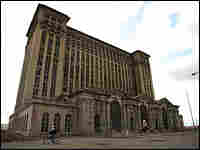 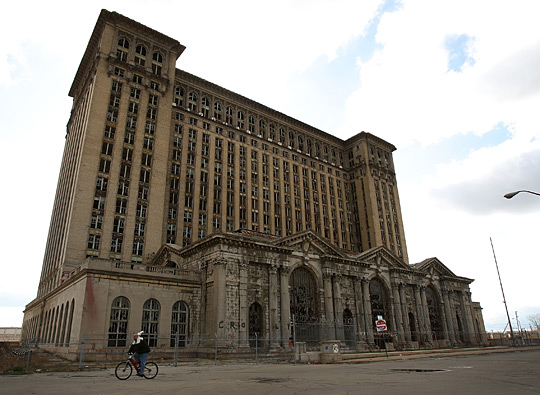 A man rides his bike past the shuttered Michigan Central Station. 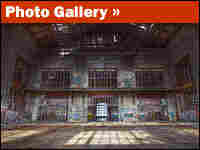 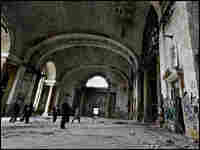 Michigan Central Station has been out of use since 1988. Plans to demolish or restore the railroad station have yet to be reviewed. Diane Weiss/Detroit Free Press hide caption 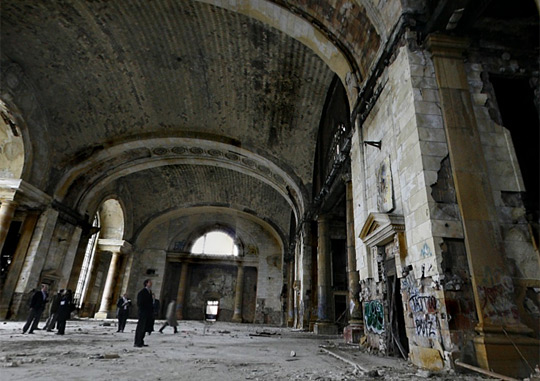 Michigan Central Station has been out of use since 1988. Plans to demolish or restore the railroad station have yet to be reviewed.

Recently destined for demolition, Detroit's Michigan Central Station — one of the city's most historic and distinctive skyline silhouettes — has received a temporary stay of execution.

Built in 1913 and designed by the same architects responsible for New York's Grand Central Terminal, the Detroit landmark features an 18-story tower and elaborate Beaux Arts stonework in its lobby.

Though the last train pulled out of Michigan Central Station in 1988, University of Michigan professor Reynolds Farley says many Detroiters still have a passion for the building.

"You can't spend much time in Detroit without seeing this building," Farley says. "When I've given tours to people who've never been to Detroit before, one of the first things they ask is, 'What is that building over there?' "

The depot has been used in dozens of films, including Transformers, The Island, Four Brothers and 8 Mile, and its imposing, 230-foot classical tower can be seen for miles.

For Detroiters, it represents a time before the riots and before the decline of the auto industry, when Motor City was the fastest growing metropolis in the country. During its heyday, the depot was crowded with African Americans coming north from the rural South to find work, as well as an equally large influx of European immigrants who came to Detroit by train after leaving Ellis Island.

"Michigan Central Station was their landing spot," Tim McKay, the director of the Greater Corktown Development Agency, says of the immigrants. "This is where they began their life as Americans."

Dan Stamper, the president of the Detroit International Bridge Co., which currently owns the building, remembers walking to the depot as a child to pick up family members. He says his company wound up owning the station after making a loan to another company. When the other company couldn't repay the loan, it offered the station instead.

Stamper's company has been trying to find a use for the depot ever since it was acquired. There have been proposals to turn it into an international trade center, a convention center and a casino. At one point, Detroit's former mayor wanted to use it as a police headquarters.

"We spent a lot of effort, a lot of money, had a whole team together to renovate it and reuse it," Stamper says of the police headquarters plan, "only to ultimately find out that the city couldn't make the deal work from their end."

Now, the building is vacant, abandoned and forlorn. A chain-link fence topped with bent razor wire surrounds it, leaning precariously in some places. The stonework on the station's lobby is marred by graffiti, and a dozen trees can be seen growing out of the roof. In the building next door, police discovered the frozen corpse of a man inside an elevator shaft.

In April, the Detroit City Council voted to have the building demolished.

Stamper says some people want the depot razed because it's a visual rendering of the decay of Detroit. But in spite of the problems, many Detroiters still find the depot beautiful and inspiring. Hundreds of them protested the council's decision, including Tim McKay.

"I see this train station every day of my life," McKay says. "I live here, work here. This building represents a bygone era. It also represents a great opportunity."

McKay says the residents of Corktown, the neighborhood that houses the building, want to use the station as the backdrop to a city park. He envisions it as a viable green space that could be used by all.

And the International Bridge Co. has some ideas in the works as well; Stamper has submitted a proposal to the government to use part of the depot as a facility for Homeland Security.

"We want to refurbish just the historic part," Stamper says. "The main entry, main lobby of the depot. The tower would come down."

In light of possible new plans, the Detroit City Council postponed the building's demise — though city leaders have said the building will have to be refurbished or demolished soon, so it will no longer mar the skyline of Detroit.

But McKay says Detroit residents see the skyline everyday: "It is not an eyesore to us who live here. We see what it was, what it is and what it could be."

The council has not set a date to reconsider demolition plans. But any restoration of the depot will cost millions of dollars, and if no one steps forward to shoulder that cost, the depot that welcomed millions to the industrial North and to the United States will soon be just a memory.