Accessibility links
Look At That Puppy! But Be Careful What You Say It's sometimes said that people grow to look like their dogs. Commentator Julie Zickefoose hopes that isn't true, but she has a public service announcement for people who might be tempted to comment. 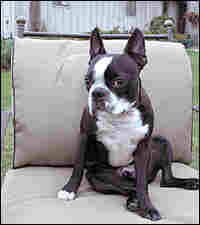 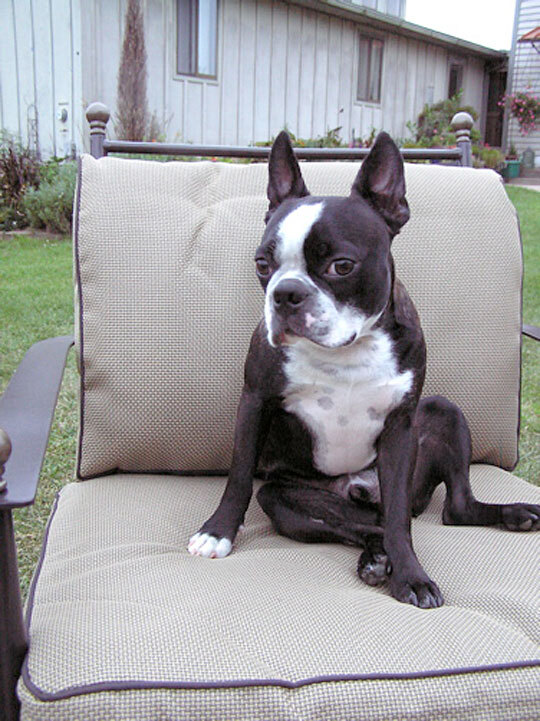 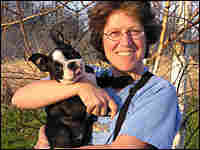 Zickefoose with her dog, Chet Baker. Zickefoose is an artist, writer and naturalist. Her most recent book, Letters from Eden, is a collection of essays and paintings. Courtesy of Julie Zickefoose hide caption

I never much liked the look of dogs with mooshed-in muzzles and googly eyes: pugs, bulldogs, Boston terriers. I was always more of a hound person. I thought a dog should have a nose. I underwent a seismic shift in my dog breed preferences when my youngest son entered preschool. It had to be hormonal; it had to have something to do with the maternal drive, inappropriately directed. Suddenly, these animals with their big, forward-facing eyes and round heads were immensely appealing to me. As my friend Margaret dryly observed, "You were done having kids, so you got a dog that would look like a baby for the rest of its life." Well, yeah.

We got a Boston terrier puppy, mashed in face, googly eyes and all, named him after our favorite jazz musician, and went on to become rabid fans of the breed.

I had a man once volunteer his chagrin that Chet Baker's face is so ugly, which is too bad because he'd be such a nice-looking dog otherwise.

Ohhhh-kay. Any more comments from you? Or are you content to wake up some night to the sound of my heavy breathing, my silhouette against the moonlight, arm raised?

Chet and I were sitting in the car, waiting for the school bus on our country road, when an acquaintance who was also waiting got out of her car and asked, "Is that one of them Boston bulls?"

"Them things is HYPER!"

I smiled, nodded and raised the electric window, effectively sealing off her tirade, like that scene in the movie This is Spinal Tap, when the driver is trying to convey the greatness of Frank Sinatra to the band in the back seat. "When you've loved and lost the way Frank has ..." and zooop! Up glides the window.

Of course, she gave me a little gift that keeps on giving, because "Them things is HYPER!" has become a catchphrase in our house now, whenever we catch Chet Baker stretched out on the carpet, legs pointing fore and aft, like a sleek black Batmobile or a puddle of lazy ink.

This has been a public service announcement for people who do not own dogs. When you see someone with their dog, be it delicate or ponderous, meek or fearsome, smooth or wrinkled, and you feel the urge to comment, think before you speak. Know that the animal, no matter how odd, baggy or scrofulous, is loved, is a thing of beauty to its owner. Find something nice to say, or don't say anything at all. Just like Mama told you.