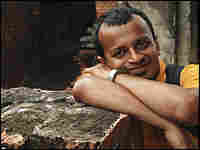 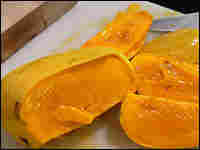 The Alphonso mango is known as the King of Mangoes in India. Courtesy of Sandip Roy hide caption 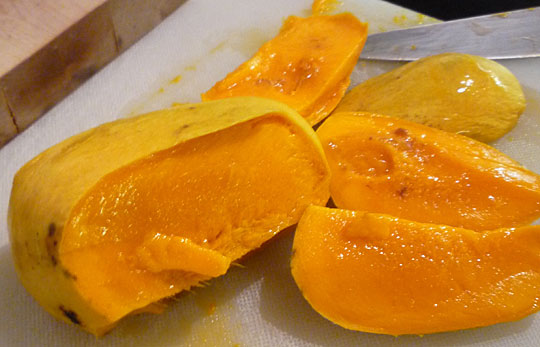 The Alphonso mango is known as the King of Mangoes in India.

President George W. Bush made his first trip to India in 2006. He praised the new agreement on nuclear cooperation between India and the United States. But for Indians living abroad in the U.S., he said something else that really caught attention.

"The United States is looking forward to eating Indian mangoes."

For almost 20 years, Indian mangoes (thought to be some of the best in the world) weren't allowed in this country because of FDA import standards. And there was a little problem with a pesky seed weevil.

Before the Indian mango detente, all you could get in the U.S. were undocumented mangoes smuggled in through customs by fanatics like my friend Nawaaz.

"I had this bag, wondering what should I do? Should I throw these mangoes away? They were smelling so much. Or should I just try to smuggle them through anyway? My heart was beating terribly. I decided the mangoes smelled too good to actually waste."

But now I can walk into my local Indian grocery store and find boxes of mangoes from India next to the basmati rice. The store clerk at Namaste Plaza in Silicon Valley says that when summer rolls around, he starts getting phone calls from regular customers who will buy a few boxes and distribute them to relatives.

Inside were 12 forlorn mangoes, each wrapped in a little pink Styrofoam net stocking. This is not how mangoes were meant to be sold. In India, you find them piled on the side of the street, great pyramids of red, green and gold, ripening in the lazy heat. And a vendor chants the names of his mangoes: Himsagar, Babu Himsafar, Langra.

There are said to be some 1,500 varieties of mangoes in India. Only a couple have been cleared for export to the U.S. One, the Alphonso, is known as the King of Mangoes in India.

For a more unbiased opinion, I took my shrink-wrapped Alphonso to Elizabeth Falkner, chef and author of Demolition Desserts. We stood in the bustling kitchen of Orson, her restaurant in San Francisco.

First she tried the little yellow Mexican mango. She liked it; it's pretty much what she's used to in a mango.

Then she tried the big red and green Guatemalan one.

"There's a stringiness to them. And that's something I'm not really crazy about. They taste more like vegetable than fruit."

"Oh my god. That is really good. Mmmm. They have a really different flavor than most mangoes I've had. It's a deep sort of sweetness, almost like a caramelized sweetness. Wow, can you tell me where I can buy these now?"

The Alphonso is still king, even when it's eaten in a kitchen in San Francisco. But I still crave that first mango of summer in Calcutta, the juice dripping down my chin, the cool orange flesh the only thing that made the muggy days bearable. My mother can still summon the mangoes of her childhood as if reciting a prayer.

"Langra is most delicious, but Bumbai is sweeter. Madhu Gulglui, you make a hole and just squeeze out the flesh and all the juice comes out, leaving only the seed."

The taste of mango was a price of immigration. It was our symbol of loss, and all the sweeter for it. Now my local Indian paper advertises Alphonso saplings for sale in California, one per family. The Alphonso might become just another fruit. But at least for the other 1,499 varieties, you still need to catch a plane to India.