Accessibility links
It's Up To You, New York (And Job Growth) Tsivia Finman entered the job market at the wrong time. Six months ago, the 24-year-old headed to New York City with $2,000 and two degrees, with hopes of finding fulfilling work. Today, she has an unfulfilling job and no health insurance.

Today's 18-to-25-year-olds grew up in a period of relative prosperity. They're now trying to start their lives in one of the most challenging economic times in recent memory. This series — a collaboration with PBS' NewsHour — will feature stories reported by veteran broadcast journalist Judy Woodruff.

Pew Research Center Report: Gen Next Squeezed By Recession, But Most See Better Times Ahead
NewsHour -- Generation Next: Tough Choices 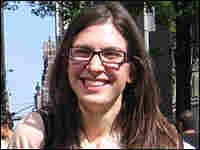 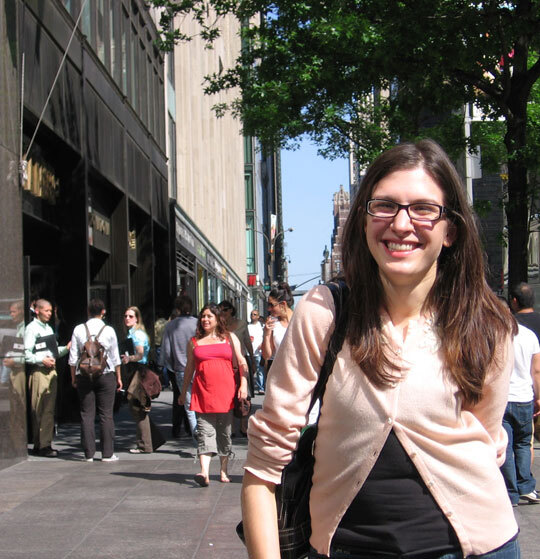 Tsivia Finman says she'll pursue her New York City job hunt until she only has enough cash to buy a ticket home to Michigan.

The Young And The Unemployed
Alyson Hurt/NPR

Today's 20-somethings — like Gen-Xers and baby boomers before them — were told that if they did everything right, they could have anything they wanted. Now, as young adults, they've had to put that promise aside and figure out what to do next.

Right now, 24-year-old Tsivia Finman is six months into her New York City job search and says she's ready to move away from plan A: to find meaningful work. But she's still looking.

Finman thought government jobs were a safe bet when she moved to the city with two college degrees, $2,000 and one plan. She has a master's degree in public administration from Wayne State University and hopes to make policy or run a government program someday.

"Everyone was saying the government sector is opening up. This is what I'd been hearing for years," she says.

But Finman didn't think the slump in the economy would hit her sector or have the reach that it did.

Finman knows she's competing with lawyers and accountants who've lost their jobs. She says she'd take any entry-level position, but with tight budgets and hiring freezes, there are not a lot out there. Sometimes she feels cheated by the bad economy, but the huge reach of the problem is reassuring, she says.

"This is bigger than me, bigger than the city of New York," Finman says. "This is a global problem."

"I don't have medical insurance," she says. "Thankfully I've been really healthy, but that's not what insurance is for."

A lot of people in their 20s face the same problem: no job, no health insurance. But Finman has a health condition that could threaten her life. Marfan syndrome weakens connective tissue in the body. Finman takes pills to relieve stress on her heart. Without regular monitoring, her aortic valve could weaken or rupture.

"I take my medication. It's generic, and I can afford to pay out of pocket," she says. "And I find this distasteful, but I'm in the process of applying for Medicaid."

But it all comes back to the lack of employment.

"You always think, 'I'll find that job, I'll find that job,' which is why I didn't apply for Medicaid earlier," she explains. "It's like something is gonna come along, I'll have that work, but you can not do what I'm doing. It's playing with fire, and it's scary. It's scary."

From Michigan To The Bronx

Listening to the kids from the school next to her apartment in the East Bronx, Finman wonders if she should have been a teacher, like her parents and grandparents.

Finman grew up in a Michigan suburb that was so quiet, her family didn't lock their doors. She is the eldest of seven children in an Orthodox Jewish family, and she lived at home through college and graduate school.

The East Bronx apartment is her uncle's place — in fact it's where he grew up — and now she lives there rent free, which is a huge help.

Finman is making some money. She works at a used bookstore. She earns less than a babysitter does in New York City, with no benefits, but it's enough money to keep her in the city to look for a job she'd rather have.

And even though Finman has the free apartment, she hasn't asked anybody for money and says she gets a certain pride from that.

"I feel I'm turning 25 this year, it's about time I was independent."

But Finman does worry about her health.

"When I start thinking about health insurance, that's when all of my positivity about finding a job goes away," she says. "I become desperate and sad and scared. All of those feelings you try to keep at bay, they kind of pop up."

And then Finman reminds herself that many people have it worse, and many eras have been worse.

She's talked with her grandparents about the Depression.

"My grandmother remembers going to the grocery store for two stalks of celery, because that was all they could afford," she says. "They couldn't afford the whole bunch. That was just part of life.

"I think what we learn from that generation is how to survive. You couldn't complain; there wasn't time to complain — you just had to live. And so I try to use that as inspiration, because I feel like I'm always complaining about this."

When Finman thinks about what she'd say to her own grandchildren about this time in her life, she says: "If I'm having grandkids, it'll mean things worked out, and so the story will have had a happy ending. And I'll say ... 'Perseverance really pays off, kids.' And I'll be there for them in the way my parents, friends and extended family have been there for me."

And she just may be right. She has a few job interviews lined up in New York later this month.