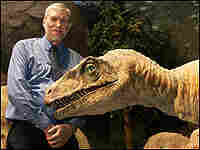 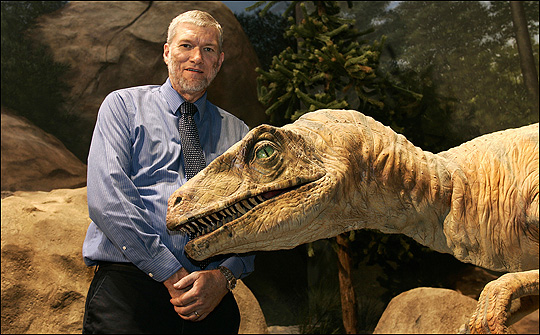 Ken Ham poses with a mechanical Utahraptor at The Creation Museum.

Twenty-five years ago, Ken Ham says, he felt a calling to build a museum to promote creationism.

A quarter-century and $27 million later, The Creation Museum has opened in Petersburg, Ky., just outside Cincinnati.

The displays offer the creationists' view of how the world came to be, which differs sharply from the teachings of science.

Ham, a native Australian, breaks down the differences for Steve Inskeep:

"There is a conflict if you try to add evolution to the Bible and take Genesis as literal history," he says. "For instance, the Bible teaches man was made from dust in [the book of] Genesis … whereas evolution would teach that man came from some ape-like ancestor.

"I know there are many Christians who say they believe in evolution [over] millions of years," he says. "I would say they're being inconsistent in their approach to scripture. A literal Genesis is actually the foundational history for the rest of the Bible for all doctrine.

"When you have dinosaurs and people together, that makes a statement concerning one's belief about the age of the Earth and evolution," he says. "Obviously it flies in the face of what secular evolutionists will teach."

Ham says the museum – which drew protesters on Monday – does try to cover both sides of the debate.

"We actually do give both sides as people walk in," he says, explaining that a fossil exhibit has "a creation paleontologist" and "an evolutionary paleontologist" offering different interpretations of the same fossil.

He rejects the idea that science has a lock on empirical evidence.

"All scientists have presuppositions that they start with that determine how they interpret evidence," he says, adding that scientists were not around to see dinosaurs walk the Earth anymore than creationists can claim to have been present to observe Adam and Eve.

He remains hopeful that the museum will attract skeptics as well as believers.

"I think a lot of people will come who don't agree with us," he says. "There are people who won't go to church, but who will go to something like this."